A special boy got to meet his hero on Wednesday.

Seven-year-old Hughie Dauphinee was born with a cleft lip and palate, a birth defect where the tissue at the roof of the mouth and upper lip do not fuse properly, leaving an opening. He has been undergoing surgeries to correct the condition.

The boy found a role model in Nova Scotia’s Chief Medical Officer of Health Dr. Robert Strang, who was born with the same condition.

Luckily for Hughie, Nova Scotia is a small place. The boy’s neighbour is a physician and friend of Strang.

Hughie’s mother, Dawn, told CBC News that she messaged her neighbour about Strang’s performance during the pandemic.

“I sent a text saying what an amazing job Dr. Strang has been doing, ” she said. “Our moms’ group was big fans of Dr. Strang, and that Dr. Strang was Hughie’s hero.” 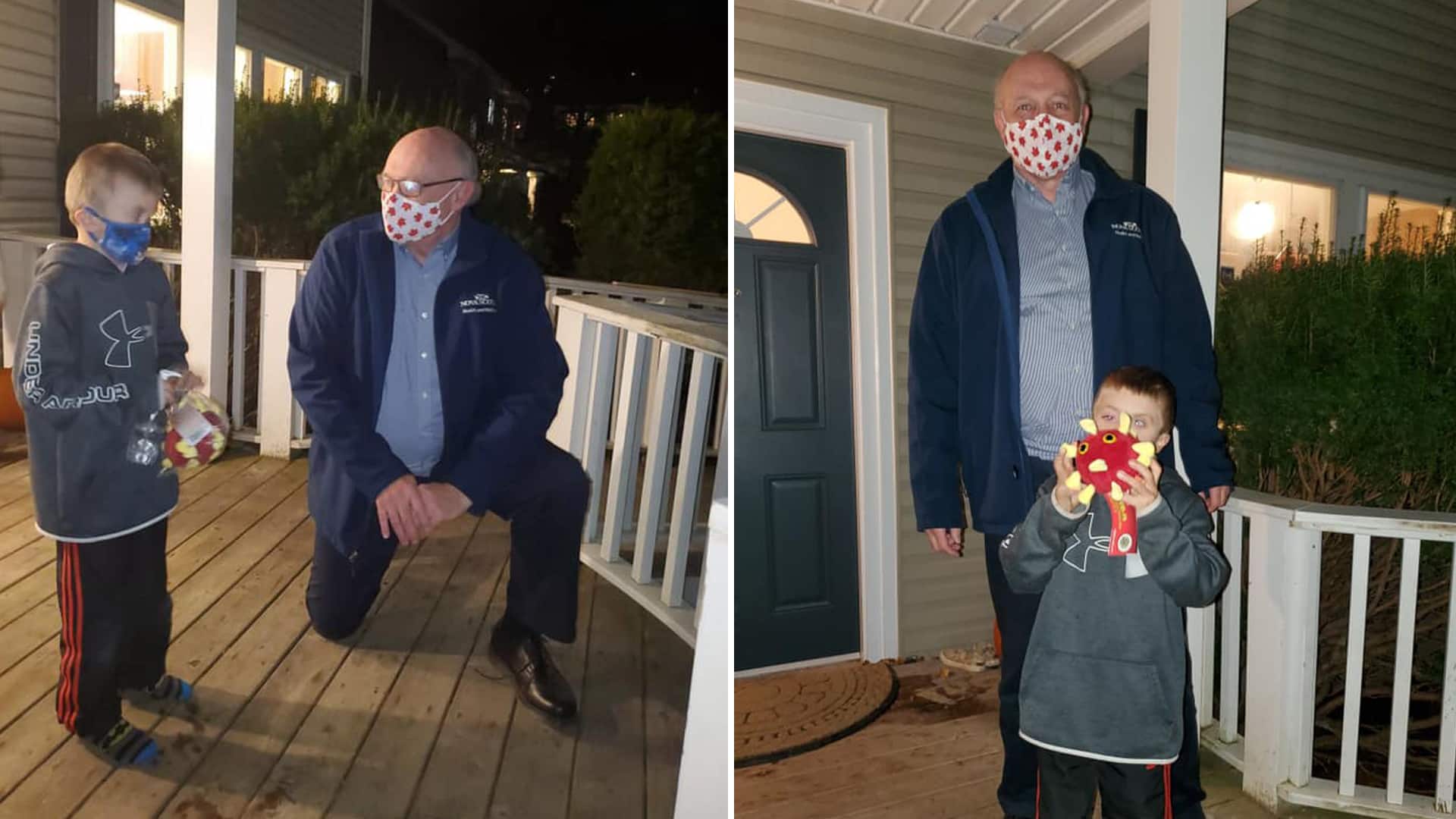 Little did she know that the message would get passed on to Strang.

He offered Strang some hand sanitizer

Strang showed up at their Halifax home at 5:30 p.m. Wednesday.

Hughie said he was only told about the visit two minutes before the doorbell rang.

“I reacted bouncing off the walls because he has a cleft lip and palate and he’s keeping Nova Scotia safe,” Hughie said.

Then Hughie said he offered Strang some hand sanitizer out on the front porch.

The Grade 2 student said he has been taking the pandemic seriously and heeding Strang’s advice.

Strang presented Hughie with an appropriate gift for the times — a COVID-19 stuffed toy.

After meeting, and sanitizing, his hero, the two chatted on the porch about their shared condition.

“He told me about his surgeries and he only had three when he was a kid,” Hughie said, adding that he has had five surgeries.

Hughie’s 10-year-old brother also got in on the action. He read a comic book to Strang as they sat on the porch steps.

Hughie’s mother said Strang “listened and laughed” with them during his visit.

Thursday was a day for Hughie to bask in the fame. “They [friends] figured it out, they saw me on the news,” he said.

Kids at school asked him for his autograph.

Dawn said after seeing “that superhero” on television for months it was nice to see him as a real person, too.

“It’s amazing for him to come and take the time, because Hughie hasn’t seen a lot of people with cleft lip and palate, and to have such a great role model is really special.”

She posted photos of the meeting on Facebook with the hashtag #notallheroeswearcapes.