By Willie O’Ree with Michael McKinley

Willie O’Ree loved to play hockey. He’s a living hero, and transparently a caring, classy guy, so we take him at his word when he says it’s all about loving the game. But how does a passion for hockey survive the assaults and abuse that O’Ree faced every time he stepped on the ice?

Willie begins in the eighteenth century, with Paris O’Ree.

“As part of their payment for services in the army, officers of the South Carolina regiments received “three grown negroes and one small negro” to be their slaves. And so, as Peter Horry’s slave, Paris took on his name. We can only surmise that Paris O’Ree, as the name came to be spelled, reached Canada sometime in the late 1700s. We don’t know exactly how Paris won his freedom, but I am the great great grandson of an enslaved man.”

With that, Willie sets readers up honestly for the book to follow. There are some great hockey stories in these pages, and every one of them sits within the history of anti-Black racism in North America.

When the O’Ree family gathered round the radio in Fredericton, listening to Foster Hewitt calling Hockey Night in Canada, Willie wondered if the radio medium itself helped him imagine his own place in the game. Had he owned a TV and watched it all in black and white, would he have seen fit to dream his way into the NHL?

O’Ree was the first Black man to play in the NHL. When he started with the Boston Bruins in 1958, it was six years before U.S. civil rights legislation. He knew the personal danger he faced. He and his family feared for his safety, and with good reason.

WATCH | O’Ree joins The National to discuss racism in hockey: 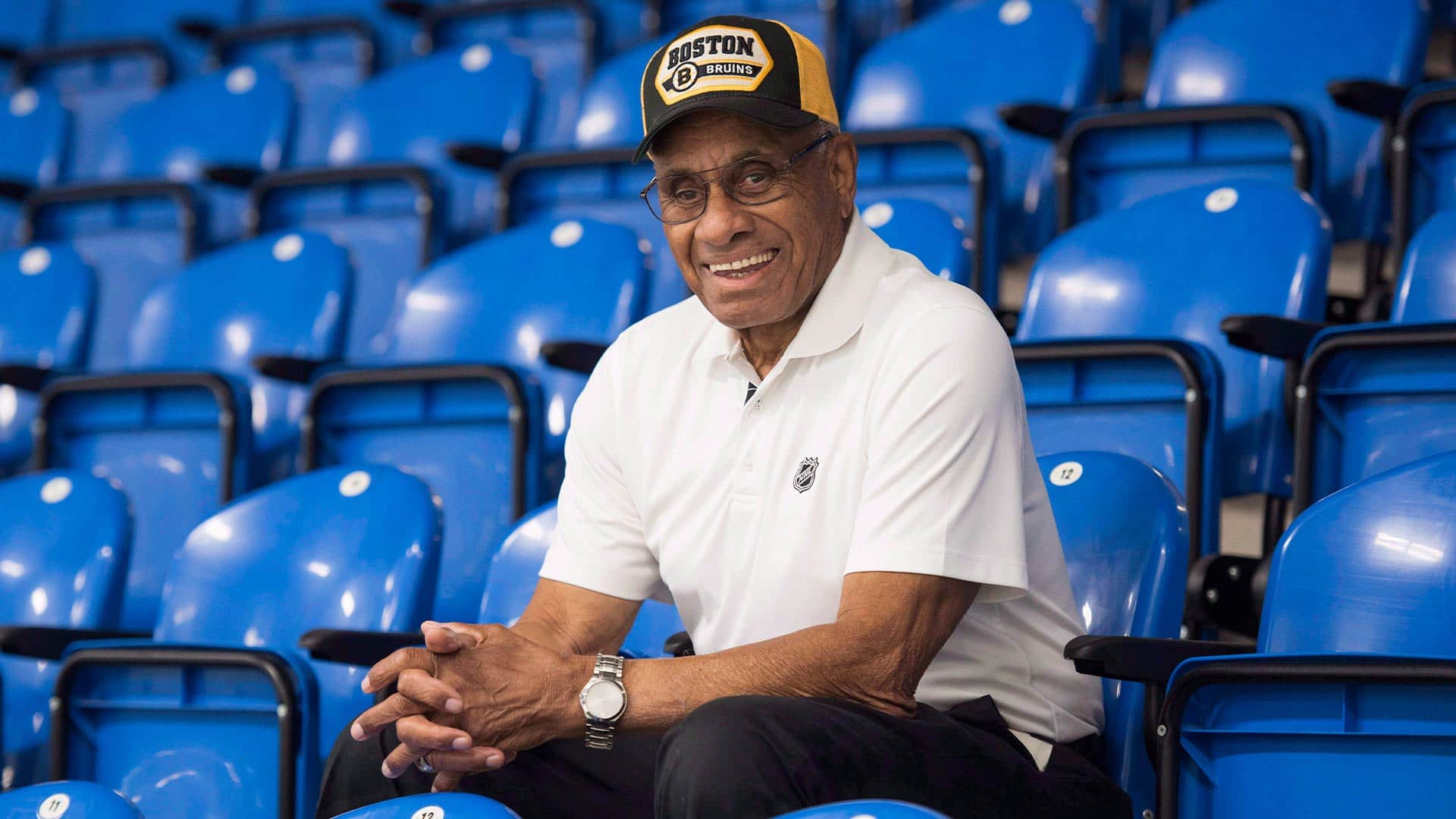 Willie O’Ree, the NHL’s first Black player, reflects on his legacy and the fight against anti-Black racism in hockey. 9:19

As a phenomenal athlete, O’Ree was also scouted as an infielder by the Milwaukee Braves farm team in 1956. Tryouts were in Georgia. That same year, Georgia Tech tried to get out of the Sugar Bowl, because its opponent, Pittsburgh, had a single Black player, running back Bobby Grier. O’Ree knew that barely a year had passed since teenager Emmett Till whistled at a white woman, and was tortured and murdered for it. Till’s killers were acquitted by their white peers, and then allowed to sell their story to Look Magazine. They profited from describing how they murdered a child. So when O’Ree headed to the Jim Crow south, he was wise to be fearful, but he was also determined to play his own game.

Willie is studded with stories like that. He lived through the entire civil rights era; he was there when Watts burned. He had first-hand experience of overt racism in the U.S., and the shameful, but more subtle, Canadian variety. He made his own forays into areas that white people had enjoyed exclusively. He took principled decisions, and the reactions were often disgusting, but he persisted, taking names along the way. Teammates are singled out for their lack of bigotry.

O’Ree pulls no punches. Before he made the NHL, Quebec City’s fans embraced him, but Chicoutimi was the worst. About to be jumped by a racist in a racist crowd while he was sitting in the penalty box, he writes:

“I met him with one clean punch. He went flying backwards. This did not make the Chicoutimi fans happy. Now they were screaming for blood, and some of them started to climb down toward me in the penalty box. But my teammates came to the rescue, and soon we had a real brawl, with guys duking it out all over the ice and my teammates trying to get me out of the box. The guy who’d planned to attack me got up with a bloody nose, and although he tried to escape back up the stairs, he was blocked by screaming fans. I could have landed a couple more punches on him, but I’d made my point.”

Showered in spit, blood and insults, he continued to make his point.

O’Ree is thorough in acknowledging others, even when it comes to his own pioneering role. He sees the phenomenal hockey skills of Herb Carnegie, also a Black player, who Conn Smythe barred from the Leafs.

“He pretty much didn’t trust anyone who wasn’t white and Protestant,” O’Ree plainly states about Smythe.

Larry Kwong had a short and cruddy experience in the NHL, marred by racism.

“… Larry Kwong was the first player to break the color barrier, and I was the first Black player. And yet people see me more as the pioneer — because of racism against black people in pro sport at the time, because my career in the NHL was longer, and because I echoed Jackie Robinson’s triumph in being the first black player to crack the premier league. Let’s just say that what Herb Carnegie and Larry Kwong experienced didn’t go away when I made the NHL.”

Willie O’Ree broke the league’s colour barrier in 1958, and there have been a lot of firsts since then. Rob Pizzo walks you through 9 trailblazers for Black History Month. 1:52

He calls Punch Imlach the fairest coach he ever met. He plays for Eddie Shore, one of hockey’s most interesting characters.

As if his racial pioneering work isn’t remarkable enough, Willie is also about how O’Ree played his entire professional hockey career without anyone knowing he was blind in one eye. In 1955, O’Ree caught a slapshot in his right eye, and his doctor told him (and no one else) that he’d never play hockey again. From that moment, Willie determined to fake it as one- eyed 19-year-old hockey player. Being right-eye blind is extra challenging for a left winger. Heading down ice with the puck, his good eye faced the boards. He had to swivel his head like an owl to see trouble coming — which did not always work.

Playing Chicago in 1961, Eric Nesterenko aims the most offensive word he knows at a Black man, then butt ends O’Ree, taking out two teeth, and they have a bloody brawl. Next time they meet, Nesterenko slashes him on the ankles, which can end a career. O’Ree doesn’t respond. Thirty years later, Nesterenko has a chance to apologize when they meet at an all-star game. He doesn’t. Thirty years after that, O’Ree names and shames Nesterenko in this autobiography.

In explaining why he was not more vocal about racism on the ice during his career, O’Ree demystifies “hockey answers.”

“Remember, hockey players love to get under each other’s skin. If I tell the whole league on national television that racial barbs really bother me, I can pretty much guarantee that I’ll hear more of them. After all, if I tell them I’ve got a sore rib, they’re going to hit me every chance they get.

Above all, you want to be team-first. That’s just hockey culture. Talking about your own unique challenges is about as far from team-first as you can get. So I gave the hockey answer, and let viewers figure it out for themselves … I’ve heard a few jeers, but I guess all hockey players get that. Which is true, but they didn’t get the type of jeers I was getting in some arenas.”

Back to that initial puzzle. How does he love a game that made so little room for diversity? Willie finishes, as it begins, at the beginning.

“…when I think of Paris O’Ree and what he went through, I’m reminded that whatever I’ve been able to do was possible only because of what he had the courage to do. If he’d done nothing, I could have done nothing. But courage begets courage. Good begets good. When courage and goodness wither within us, they wither in the future. When we nurture them, we nurture the future. We nurture generations to come. I was given freedom, and because of that, I can help offer it to others. And while I offer it to others I gain more of it for myself. Because generosity frees us. Courage frees us. Much has been given to us. It falls to us to pass it on. And I will.”

And that’s one hockey answer worthy of memorizing.