COVID-19 levels are declining from the devastating peaks of the second wave across much of Canada, but experts say the threat of more contagious coronavirus variants threatens to jeopardize our ability to prevent a third wave.

Canada has close to 850 confirmed cases of the variants first identified in the U.K., South Africa and Brazil, with at least six provinces now reporting community transmission — meaning there’s probably a lot more spreading beneath the surface than we know.

But as variant cases increase, overall COVID-19 numbers have dropped steadily in Canada, with just over 31,000 active cases across the country, about 2,900 new cases per week and 54 cases daily.

So, is Canada destined for a third wave? Or will we be able to adequately respond to the threat of variants spreading across the country to avoid one altogether?

Parts of the country that have seen notable declines in cases have recently moved to reopen non-essential businesses and lift lockdowns in the face of fast-spreading variants, despite public health officials cautioning against doing so. 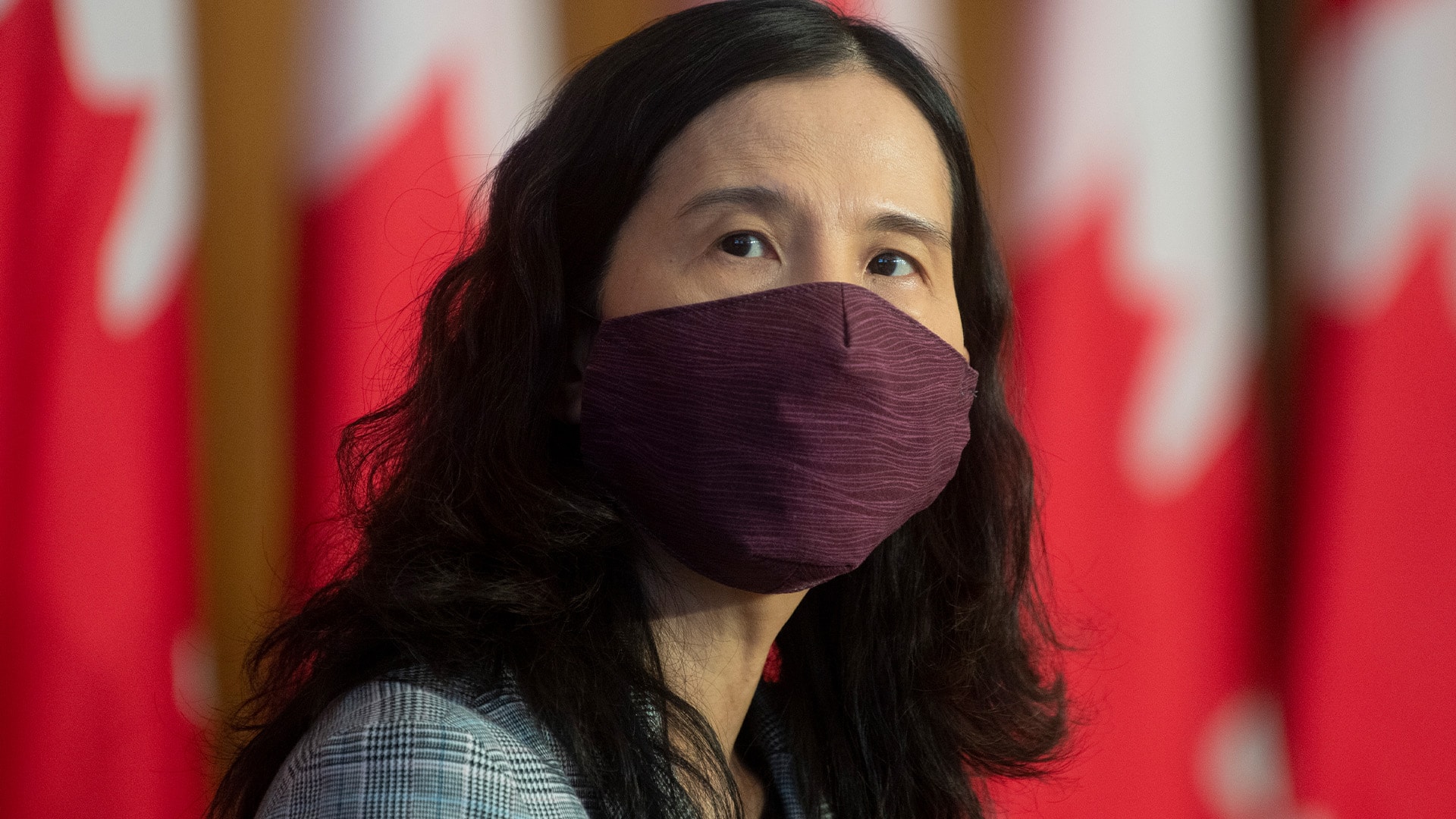 Variants are spreading and the virus is changing. But Ottawa’s new modelling reinforces a familiar message. Case rates may be down now, but ease up on restrictions too soon, and disaster could be close behind. 1:50

Is a 3rd wave in Canada inevitable?

Much like the first and second waves of the pandemic in Canada, the situation varies greatly across the country for a number of different reasons — ranging from geographic and demographic to political.

But even provinces and territories that have had fewer COVID-19 cases are still at high risk of devastating outbreaks, overwhelmed health-care systems and severe outcomes for vulnerable populations if variants spread rapidly.

Tam said Newfoundland and Labrador is a cautionary tale for the rest of Canada, where an outbreak of the variant first identified in the U.K., also known as B117, led to a spike in new cases in the community during a time when public health measures were “less stringent.”

“Provincial health authorities knew something was different when cases escalated over a matter of days, even before laboratory evidence confirmed the presence of the B117 variant,” she said.

Dr. Isaac Bogoch, an infectious disease physician and scientist with Toronto General Hospital, said variants have made it hard for anyone to predict the likelihood of a bad third wave of the pandemic in Canada with any degree of confidence.

“When you factor in variants of concern and you factor in not enough immunity in the population to protect ourselves, it’s clear that a third wave is certainly a possibility,” he said. “But I wouldn’t say it’s an inevitability.”

Bogoch said the likelihood of a third wave depends on how Canadians respond to the loosening of restrictions and the increase in opportunities to mingle together and get into situations where the virus can more easily be transmitted.

“It also completely depends on how the provincial governments and the public health authorities choose to reopen their provinces and their ability to rapidly react to a rise in cases,” said Bogoch, a member of Ontario’s COVID-19 vaccine distribution task force.

“It doesn’t mean you have to stay locked down until everyone is vaccinated. It just means that as places reopen, they have to be extremely careful, proceed very slowly and be able to rapidly pivot if there’s any indication that there are cases plateauing or rising.”

What is the likelihood of a 3rd wave in Canada?

Raywat Deonandan, a global health epidemiologist and an associate professor at the University of Ottawa, says that based on what we know right now, a third wave is “mathematically inevitable” in Canada because of three key factors.

The first is we know what third waves typically look like from previous pandemics, such as the 1918 Spanish Flu, which saw a brutal third wave during the winter and spring of 1919 — around the same point of the pandemic we’re in now.

Deonandan said societal behaviour is another factor that could lead to a more severe third wave if variants drive outbreaks as restrictions left and Canadians don’t strictly adhere to public health guidelines.

And the third factor is variants, which Deonandan said could be the driving “mechanism” for a devastating third wave in Canada given the extent to which they’ve already spread in recent weeks.

But he said the likelihood of a bad third wave could change with two major caveats.

“The second caveat is of course vaccination.”

The good news is that vaccines have not only been shown to be effective in the real world in reducing severe outcomes from COVID-19 but also in potentially curbing virus transmission.

But the catch is we may not be able to vaccinate enough of the population fast enough in Canada to adequately slow the spread of variants in time before they take over.

“It’s a race against time. We want to get the vaccines out there now, before variants get in,” said Dr. Anna Banerji, a physician and infectious disease specialist at the University of Toronto’s Dalla Lana School of Public Health.

“I really believe that we can get on top of this if we get people vaccinated and then make modifications to the vaccines as we need to.”

WATCH | How vaccines can keep up with coronavirus variants:

New coronavirus variants won’t necessarily mean new vaccines or vaccine boosters are needed. And if adjustments are needed, they would take less time to develop than the original vaccines. 2:01

Banerji said even if Canada has a third wave, it likely won’t be as bad as previous waves because she feels Canadians have learned tough lessons in the pandemic — such as in December, when people gathered over the holidays and cases skyrocketed.

“People see that our individual actions have an impact on the outcome, and so I think while people may feel disempowered, they’re realizing that their behaviour really does count,” she said.

“Once we get the vaccines out, things will change and we’ll start opening things up. So I’m still optimistic for the future, even if there’s a lot of fear out there.”

How bad could a 3rd wave be in Canada?

Deonandan said that while Canada may not be able to completely “vaccinate our way out of a third wave,” it could look completely different than waves we’ve seen in the past.

“What might happen is that our third wave is very high in cases but not as high in deaths, because we have done a pretty good job in vaccinating our long-term care centres if nothing else, and that’s where a large proportion of our deaths come from,” he said.

Dr. Sumon Chakrabarti, an infectious disease specialist at Trillium Health Partners in Mississauga, Ont., said once those at highest risk are vaccinated, including seniors living in the community and in long-term care, hospitalizations will likely decrease.

“But people are going to worry if we open up, we’re just going to get tons of cases,” he said. “Yes — but they’re not going to be severe.”

Chakrabarti said if Canada sees a smaller third wave, or “wavelet,” the health-care system might be able to “absorb” the impact of COVID-19 better than previous waves and avoid becoming completely overwhelmed.

South Africa recently saw a notable decline in COVID-19 cases despite the variant first identified there driving a spike in transmission, which could bode well for other countries hoping to control that variant from spreading.

But experts caution that a decline in cases could be short lived, as evidenced by countries hit hard by B117, such as Portugal, Spain, Ireland and the U.K., that later saw an even greater spike in cases driven by the variant.

If Canada is hit by a third wave, Bogoch said it’s likely that community-dwelling seniors and racialized communities will be disproportionately harmed.

“We know how to prevent this from happening. We have the tools that work, we know how to do this, we can prevent a third wave,” he said.

Deonandan said while he agrees that a third wave could be prevented, he’s all but convinced Canada is destined to face one because of a lack of political will from parts of the country that are already pushing to reopen.

“It’s highly likely. I think we could do heroic things to avoid it, but we won’t,” he said.

“But what is uncertain is what the hospitalization and death toll of a third wave will be — it might not be as severe.”