Lawyers for an American law enforcement officer have filed a motion to dismiss a counterclaim to a lawsuit from Toronto Raptors president Masai Ujiri in the aftermath of an altercation at last year’s NBA Finals.

In filings to the United States District Court on Monday in Oakland, Calif., Alameda County sheriff’s deputy Alan Strickland’s legal team says it will ask for a dismissal.

A Zoom hearing is scheduled for Nov. 17.

The dispute came as Ujiri tried to get on the court after the Raptors beat the Golden State Warriors to capture the NBA title last June.

The Raptors have said that a video released with the countersuit proves Ujiri wasn’t the aggressor in the dispute.

American law enforcement officer asks for the dismissal of Toronto Raptors president Masai Ujiri’s counterclaim to a lawsuit in the aftermath of an altercation at last year’s NBA Finals. 3:02

The footage appears to show Strickland, who was working security at the game, using his arm to stop Ujiri from getting to the court in an apparent effort to ensure he had proper credentials.

As Ujiri approaches Strickland, he appears to be reaching for those credentials. Ujiri tries to walk by and Strickland shoves Ujiri before the two appear to exchange words.

In the most recent documents, Strickland’s lawyers said he would have risked Ujiri “potentially committing any number of possibly serious crimes” if the deputy had not employed force.

The document says because it was a high-profile sporting event, there was a risk of crime.

It lists examples including the 1993 stabbing of tennis star Monica Seles, the killing of Israeli athletes at the 1972 Munich Olympics and the 2004 NBA brawl between the Detroit Pistons and Indiana Pacers.

New video released by lawyers for Raptors president Masai Ujiri shows him being shoved by a sheriff’s deputy while trying to get onto the court to celebrate the team’s NBA championship last year. The deputy claims Ujiri was the instigator and has sued him for injuries. 2:23

The document alleges Ujiri did not co-operate with officials.​​​​​​

Previously, Strickland’s legal team has alleged that Ujiri’s counterclaim is driven by race and a bias against law enforcement.

None of the allegations have been proven in court. 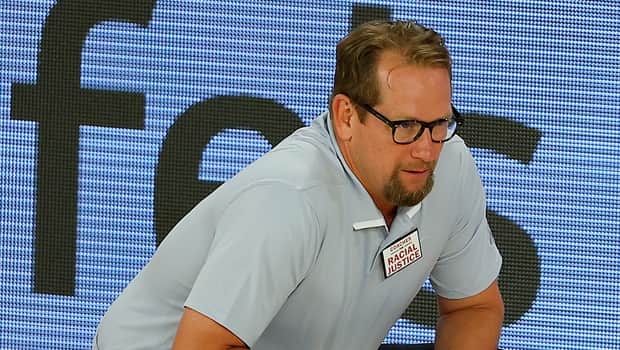 The Raptors coach responds to new video of Masai Ujiri being shoved by an Alameda County sheriff’s deputy. 3:33