A high-stakes battle for the soul of the Republican Party is now underway, holding far-reaching implications for the near future of American politics.

One front in this battle opens up this week with the Senate impeachment trial of Donald Trump, as Republicans grapple with just how far to go in defending a former president whose effort to overturn an election result ended in deadly tragedy amid the attack on the U.S. Capitol.

For those rare Republican lawmakers daring to criticize Trump, they’ve been harshly rebuked by his loyalists.

A case in point is congresswoman Jaime Herrera Beutler, one of the few Republicans in the House of Representatives who voted last month to impeach Trump for “incitement of insurrection,” leading to this week’s trial. She recently received a barrage of bad news from a party official back home in her district.

The first bit of bad news was that constituents who called the party offices were livid at Herrera Beutler.

So were there any positive calls? Maybe one for every 25 or 30 angry ones, Mattila told CBC News.

Based on polling, public comments and actions by party officials, the Trump-all-the-way faction appears to hold an advantage at this stage.

In fact, Republican supporters seem angrier with the 10 lawmakers in the House of Representatives who defied Trump and voted on Jan. 13 to impeach him a second time than they are with Rep. Marjorie Taylor Greene, a newly elected congresswoman from Georgia who has repeatedly pushed racist, violent, deranged and anti-government conspiracy theories.

Not only are those who voted to impeach being sanctioned by party members in South Carolina, Wyoming, Illinois and Michigan — they’re even being threatened. And in Washington State, the party is split over whether to simply condemn Herrera Beutler in a statement or formally censure her.

Another threat to these members comes from pro-Trump rivals hoping to unseat them in primary challenges before next year’s congressional midterm elections.

That’s the other bad news Mattila delivered: that Herrera Beutler’s political career could be in jeopardy.

Asked how likely it is that Herrera Beutler will face a primary challenge, on a scale of 1 to 10, Mattila said it’s “like a 99.”

“It’s the intensity level of the anger that I’m hearing from people that say, ‘I’ve always voted for her and I’m never gonna vote for her again. I hope you guys recruit a candidate, and we’re gonna support somebody else.'”

Here’s one final bit of troubling news for the congresswoman: Her county chair is against her, too.

Mattila said in his opinion, Trump never deserved to be impeached because he never explicitly called for an attack on the Capitol building at a rally on Jan. 6, the same day lawmakers were meeting inside to confirm that Joe Biden won November’s presidential election. And Mattila said he’s not ruling out running for Herrera Beutler’s seat himself.

The blowback for Cheney at home

A similar story is playing out in Wyoming.

Rep. Liz Cheney, the state’s highest-profile lawmaker, easily survived a vote among Republicans in Washington, D.C., to keep her leadership position after she voted in the House to impeach Trump.

A move to strip her of her role as conference chair was blocked by Republican lawmakers in a 145-61 vote. But that vote happened by secret ballot. And it was in Washington.

Things could get rougher back home in Wyoming.

The Trump team has commissioned a poll suggesting that just 10 per cent of Republican primary voters in Cheney’s state planned to support her again.

She’s been censured by her own party in numerous counties. In one Wyoming county, the party vice-chair said people feel betrayed by Cheney and that he wished she’d lost her Washington leadership role.

He said he’s seeing 10 or 20 negative comments about Cheney for every positive one from local Republicans.

“I thought I knew her very well. But I’m sad to say, apparently, I didn’t,” said John Birbari, the party’s vice-chair in Wyoming’s Fremont County.

He predicted that Cheney’s next event in the county “would either be poorly attended or would be a little raucous.”

Birbari put the chances of a primary challenge against Cheney at “100 per cent,” with one bid already announced by a Wyoming state senator.

The church elder, former newspaper ad executive and radio host who was embroiled in a local controversy over anti-gay comments said he would personally support the primary challenger.

But what about the serious allegations against Trump, which prompted all House Democrats and five per cent of Republicans to vote to impeach?

The charge: that Trump imperilled American democracy, spending weeks peddling unfounded conspiracy theories about his election loss, pressuring officials to overturn the result and finally — at a Jan. 6 rally, where his lawyer, Rudy Giuliani, called for ‘trial by combat‘ — encouraging supporters to march on the Capitol.

Birbari brushed it off, saying it’s unconstitutional for Trump’s impeachment trial to occur after he’s already left office — which is a matter of legal debate.

He also insisted that Trump was right about the election being rigged — despite the fact that dozens of judges and officials in a half-dozen swing states disagree.

What about Marjorie Taylor Greene: Do these same Republican officials have anything similarly negative to say about her? Birbari said he hasn’t followed the Taylor Greene story much, and Mattila also said he’s unfamiliar with the details.

Eleven House Republicans did vote with Democrats to expel the conspiracy-peddling congresswoman from her committee positions; by comparison, 45 voted to punish Cheney.

A scholar at the Washington-based Niskanen Center think-tank who has studied and written extensively about the history of the Republican Party said this is a strange moment without a clear precedent.

Geoffrey Kabaservice, the centre’s director of political studies, called it the end of an ideological conservative era and the start of an unpredictable and worrisome new one.

“It feels like we’re in strange, unknown, bad territory,” said Kabaservice, who is also the author of a book that examines the Republican Party’s evolution from a non-ideological coalition into a staunchly conservative party starting in the 1960s.

His book, Rule and Ruin, begins at the 1960 presidential convention, when the party had four main groups: progressives, the remaining heirs to trust-busters like Teddy Roosevelt; moderates; so-called stalwarts, who are slightly more nationalist and hawkish on issues such as trade; and conservatives.

Kabaservice said ideological conservatism grew to dominate the party but that Republicans are transforming again, and he described the emerging divide as: Who’s most willing to defend anything in pursuit of partisan gain?

He pointed to a metric used by political scientists to analyze American lawmakers’ ideology, the DW-Nominate system, as evidence that the most pro-Trump members of Congress aren’t necessarily the most conservative.

“[It’s becoming] reality versus craziness. Or normies versus freaks. It’s just strange and really hard to deal with — for the public, for members of the Republican Party in Congress,” he said.

Kabaservice said one difference between today’s Republican grassroots and the Barry Goldwater conservatives of the 1960s is that the latter believed their movement was ascendant and were generally optimistic about their chances.

He said today, many on the right voice the opposite view, echoing Trump that the game is rigged by some un-American enemy, and if that enemy cheats to win, the party needs to toughen up.

That leads to an approach to politics in which any means are justified, Kabaservice said.

The party chair in Washington’s Clark County, however, doesn’t sound pessimistic at all. Mattila notes that Republicans came close to winning both houses of Congress and predicts a dominant showing in next year’s midterm elections.

WATCH | Article of impeachment against Trump goes to U.S. Senate: 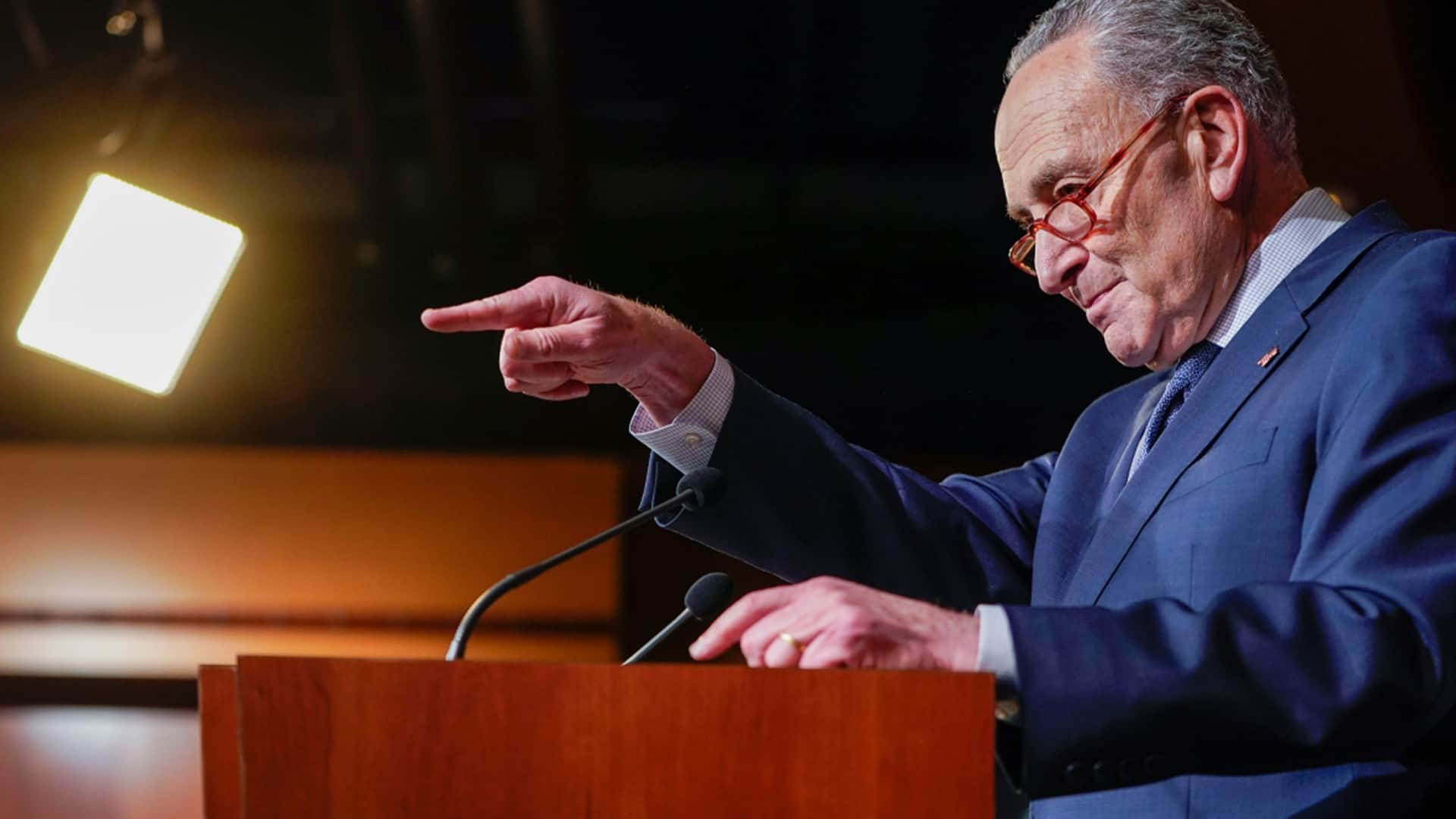 The question now for Republicans is what they want their party to look like — and should it emulate a former president who spent weeks using increasingly abnormal tactics to try overturning an election result?

This struggle has begun playing out on a variety of fronts, with moderates winning on Cheney’s leadership vote but losing badly in a vote to punish Taylor Greene. Next year’s primaries will be an epic showdown. But first, there’s the Senate impeachment trial and vote.

Rep. Adam Kinzinger, a Republican from Illinois, said he lost good friends after voting to impeach Trump — his father’s cousins even sent him a certified letter saying they disowned him because he had joined the “devil’s army.”

But he said he’ll keep trying, for as long as he can, to prevent angry, conspiracy-peddling Trump worshippers from completely overtaking the party of Abraham Lincoln.

“It’s not going great at the moment,” Kinzinger told CNN. “But this is the beginning of it.”

Kinzinger said all Americans, including Democrats, should be pulling for people like him even if they don’t agree with his conservative principles, because, he said, the country needs two healthy political parties.

One Republican defiantly stared down his own local activists.

In the face of a censure vote from Nebraska party officials over his criticism of Trump, Sen. Ben Sasse released a video essentially shrugging his shoulders at them.

In the video, Sasse characterized his accusers as enraged hyper-partisans out of sync with most Americans.

He also accused them of selling out their ideals.

“Something has definitely changed over the last four years. But it’s not me,” Sasse said.

“You are welcome to censure me again. But let’s be clear about why this is happening: It’s because I still believe, as you used to, that politics isn’t about the weird worship of one dude. The party could purge Trump skeptics. But I’d like to convince you that not only is that civic cancer for the nation — it’s just terrible for our party.”

Sasse told Republicans that they have a choice to make: “Between conservatism and madness.”