Frustration and disappointment were the prevailing emotions for Toronto FC captain Michael Bradley on Tuesday night.

His team had been expected to go on a long run in the Major League Soccer playoffs after finishing the regular season with the second-best record in the league at 13-5-5.

Instead, TFC’s was ousted in the first round as expansion club Nashville SC pulled off a stunning upset with a 1-0 victory in extra time.

Toronto had decent control of the game, Bradley said, but wasn’t able to push Nashville on to its heels enough.

“We weren’t able to really create situations of wave after wave of being dangerous,” he said.

Toronto defenders tied up German striker Hany Mukhtar in deep, but couldn’t stop him from getting a shot off. Goalkeeper Quentin Westberg made an initial stop but couldn’t control the rebound, which Rios tapped in to the net. 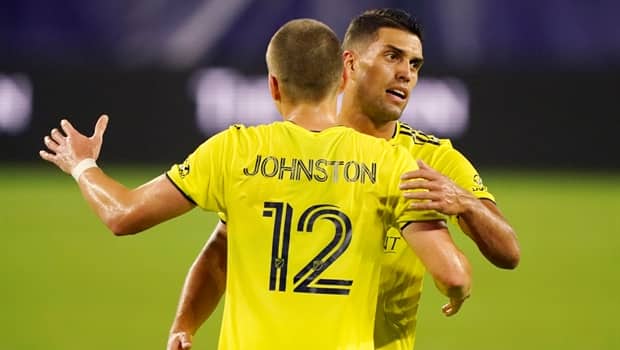 Westberg had held fast through a Nashville blitz to close out regulation, making a stunning stop on Alex Muyl in the final minute to force extra time. The `keeper had five saves for Toronto on the night.

Nashville goalkeeper Joe Willis stopped five on-target shots to collect his 11th clean sheet of the year and second of the post-season.

Tuesday marked the first-ever meeting for the two sides, coming after Nashville advanced through the play-in round with a 3-0 win over Inter Miami CF on Friday.

The upstart club posted an 8-7-8 record in regular-season play, finishing in seventh spot in the East.

Toronto coach Greg Vanney said he’d been concerned before Tuesday’s match because the visitors already had a successful post-season appearance while his squad’s last action was a 2-1 loss on Nov. 8.

TFC was simply “too slow” against the defensive stalwarts, said the coach.

A strong back end has been key for Nashville all year. The club conceded just 22 goals in regular-season play.

Toronto dealt with injuries to key players, including Pablo Piatti and Richie Laryea, to close out the campaign, and lacked some fitness and continuity Tuesday, Vanney said.

“We hit the tail end [of the season] not firing on all cylinders,” the coach said.

“In the end, the guys had the right attitude tonight, they wanted to come out and try to take the game. We just didn’t execute and we didn’t execute in the speed. And that’s football.”

Toronto nearly found the back of the net early in extra time when Laryea sent a beautiful ball across the six-yard box to Ayo Akinola, who couldn’t quite catch up to the pass to tap it in.

Trio of offsides briefly save TFC

Mukhtar did ripple the netting for Nashville in the 100th minute, sending a shot high over Westberg and in.

But on the sideline, the offside flag was raised. It was the third time a Nashville goal had been called off in Tuesday’s game.

While TFC was deemed the home side for the outing, the team was playing hundreds of kilometres away from home.

Just four of the club’s games were played in Toronto this year due to a rejigged schedule and border restrictions caused by the COVID-19 pandemic.

Vanney wasn’t inclined to blame adversity for Tuesday’s loss, however.

“Our team hasn’t made any excuses all year, we’re not going to start now,” the coach said. “We didn’t do enough to win the game tonight. And the team that was more organized got the result and they’ll move on.”

The players and staff know that the club is stocked with talent, Vanney said, so it hurts not to win and push further into this year’s playoffs.

“We’ll lick our wounds, we’ll continue to try to make the team better. And set afoot next year for another journey,” he said.

“Hopefully it’ll look like a different season. But the guys will get themselves turned around and ready for another season when the time is right.”