Small businesses in Toronto and Peel Region say it’s not fair that they should be closed for in-person shopping while big-box stores can sell all manner of goods — from clothing to books to tech gadgets — if they happen to also sell essential products such as groceries.

Retailers considered non-essential in Ontario’s COVID-19 hotspots were forced to shut their doors Monday to comply with public health directives, just as the already beleaguered sector enters the holiday season, its most critical period for sales.

The Canadian Federation of Independent Business (CFIB) says it’s not right that these small shops should be limited to curbside pickup and online sales, while retail giants are free to soak up their lost revenue.

The organization is calling on the Ontario government to adjust the rules so that small businesses can serve up to three in-person customers at once and salvage some earnings at the tail end of a difficult year.

Kelly says his organization wants the government to adopt “a small-business-first retail strategy” that allows no more than six people in a business at any given time — three customers and three staff members.

“We think that would provide lots of room for physical distancing, take some of the pressure off the big-box guys that are seeing huge, huge crowds and long lineups … while allowing that small firms can eke out a bit of a living as they embark upon the Christmas holiday season.”

Asked to explain why big-box retailers aren’t restricted to selling just the goods deemed essential, as they are in Manitoba, Ontario Premier Doug Ford said Monday that doing so “would be a logistical nightmare.”

“They have essential items spread out throughout their whole store, and then on top of that how do they monitor it, restrict people from going in there?

“And as for Manitoba, after speaking with the CEO of Walmart Canada, it’s creating massive problems out there.”

Tracy Pepe wonders why Ford doesn’t seem to be having those same conversations with small businesses owners.

“I’m angry at the government for taking this approach, because they’re not listening to people.”

The owner of The Scented L’air, an essential oil shop in Brampton, Ont., said making sure sales are done safely is everything to her.

“We have done many things beyond expectations to keep our customers safe and we follow the protocol,”  she said.

The in-store experience is central to her business. “It has essential oils I import from different parts of the world. I’m a perfumer by trade and … so the studio is designed for people to come and learn about scent.”

WATCH | Small business owner Tracy Pepe explains her frustration with how the lockdown has been handled: 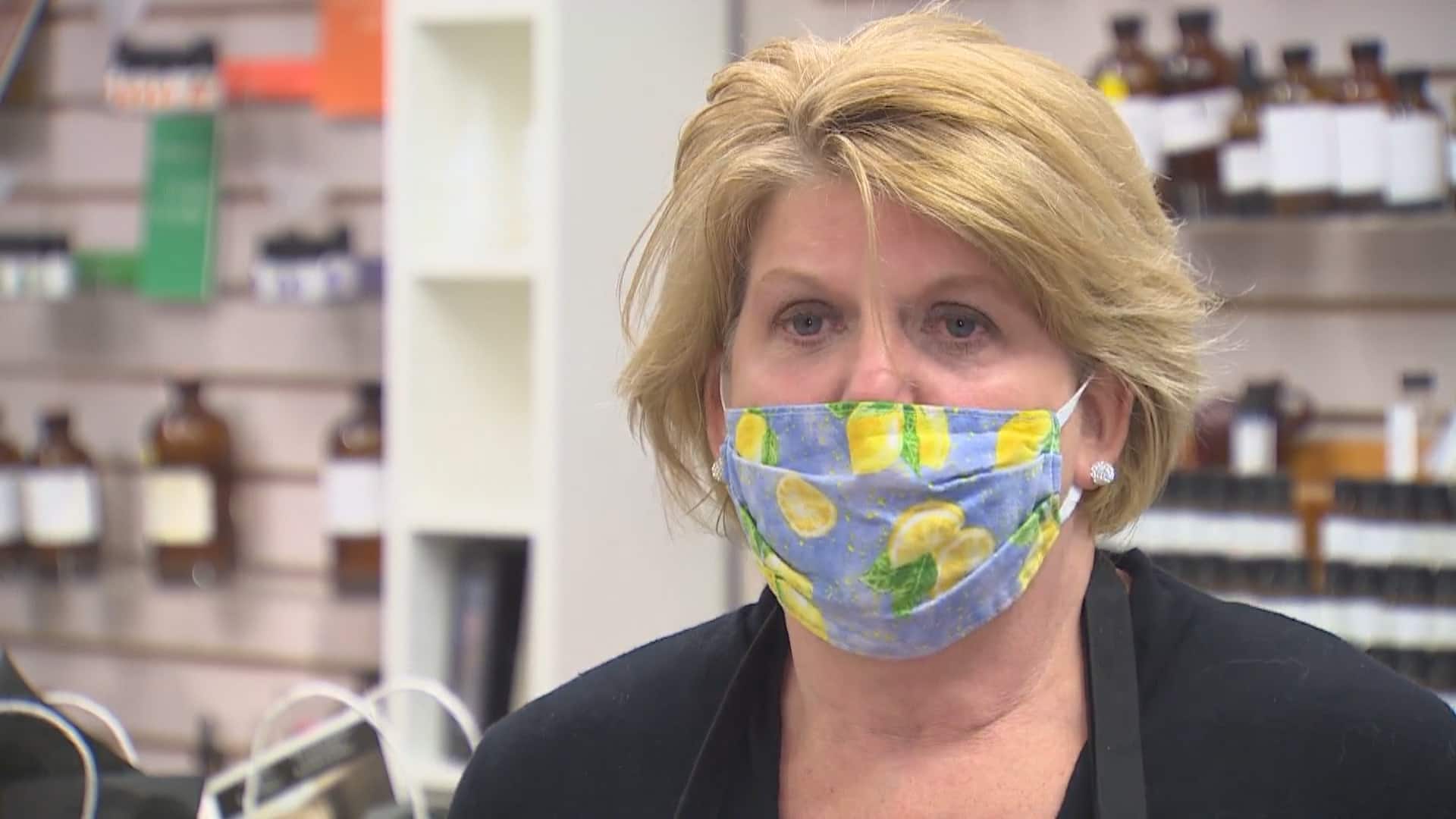 Tracy Pepe, owner of The Scented L’air in Brampton, Ont, says locking down small businesses like hers while allowing big-box stores to remain open to in-person shopping is not the right approach. 0:38

Pepe said she’d also like to see better messaging to the public about what’s expected of them when they venture out for essentials.

“Walmart may be selling groceries. I understand that. But that doesn’t mean that you get to try on a whole bunch of clothes in between. This is a pandemic and unless that messaging is sent out to the community, nobody is going to take this seriously.”

Kelly Ackerman, co-owner of Face to Face Games, which has a store in Toronto and one in Montreal that sell mostly board games, said he’s tried not to dwell on the negative throughout the crisis but does wish the playing field were more even.

“It does rub me the wrong way that you look at pictures of Costco where it’s like a sardine can and you say, how is it when we’ve got almost 4,000 square feet … we can’t have four customers in the shop?”

Online, the business is Canada’s largest online retailer of collectible trading card games like Pokémon. “But our two stores are really board-game focused; we do puzzles, games, things for your family, things for the kids,” said Ackerman.

They’re the sort of gifts people give for Christmas and Hanukkah and use to stay occupied while staying at home now that “we’ve all finished everything good on Netflix,” he said.

“If back in March you told me, hey, pick one month you’re allowed to be open this year and be closed the other 11, it would be from now until January 1. Typically we see two to three times our daily sales this time of year because people are shopping for their family, for their friends.”

While customers can still buy online or arrange a curbside pickup, the store’s strength lies with its in-store service, he said. “What really sets us apart from Amazon or even Toys ‘R’ Us is our ability to make a recommendation.”

Asked about business closures during a news conference Monday, Finance Minister and Deputy Prime Minister Chrystia Freeland pointed to supports for small businesses: a new rent subsidy paid directly to tenants — with extra funds for those impacted by new lockdown measures — as well as the extension of the wage subsidy program.

“This is a victory for small business owners who are struggling right now to pay the rent and cover bills, and especially for those who are required to close their doors or significantly restrict their operations because of a public health order,” she said.

“All of us know now that there is light at the end of the tunnel with safe and effective vaccines on the way. It would be so tragic for any viable business … to have made its way through most of the pandemic and then to falter just now as the end is in sight.”

If retailers miss out on four weeks in late November and early December, they’re done. We’re already estimating one in seven small businesses will permanently close as a result of COVID-19.– Dan Kelly, Canadian Federation of Independent Business

“Unlike March and April lockdowns, this is happening for retailers in their busiest season, at the time where they make all of their money. If retailers miss out on four weeks in late November [and] early December, they’re done. We can see the number of business closures skyrocket. We’re already estimating one in seven small businesses will permanently close as a result of COVID-19.”

“That number could even go higher in places like Manitoba, Toronto and Peel, where there are broad retail lockdowns now once again.”

Ackerman remains optimistic his business won’t become a COVID-closure statistic, but stresses that “the power is in our hands as consumers” to make the extra effort required to call a local shop for a curbside purchase or seek out a local business’s e-commerce site.

“You can go to Costco and buy presents there, or you can choose a more expensive way, a less convenient way, but a better way to support your neighbourhood.” 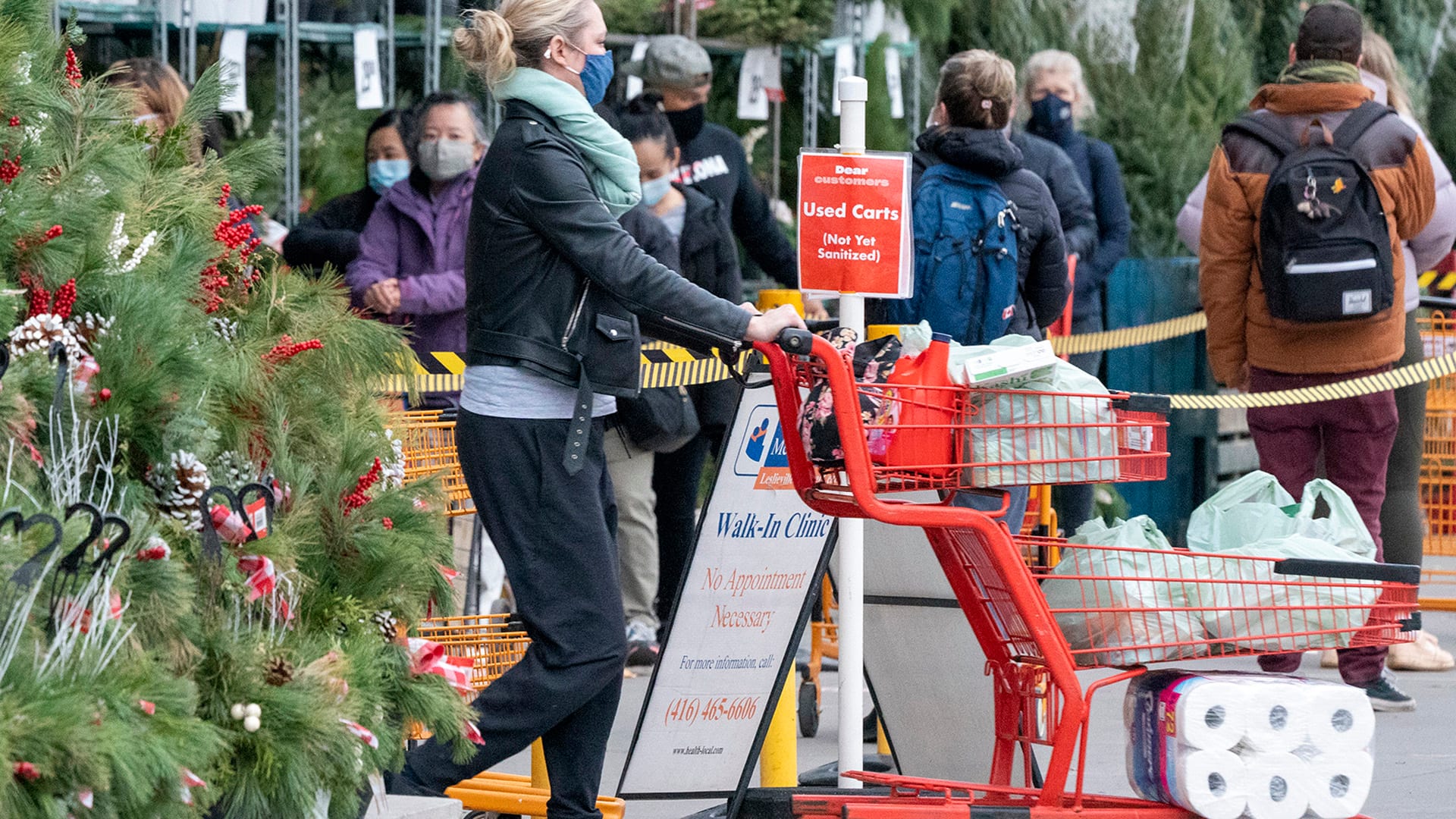 Two COVID-19 hotspots in Ontario, Toronto and Peel Region, have new lockdown restrictions, which should limit in-store shopping to essential items only. But big box stores that sell groceries are using that loophole to their advantage, while small businesses are out of luck. 2:04