A dog laid to rest with care some 7,000 years ago, the now-fossilized bones adorned with a necklace of elk teeth.

Near Lake Baikal in southern Siberia, the bodies of dogs were given proper burials by the humans who loved them.

The remains are part of an ongoing effort to track the historic ties between man and beast, and dig deeper into the genetic source of the modern domestic dog.

“Everybody wants to know the answer to this question,” said Robert Losey, a University of Alberta anthropologist, who is part of an ongoing effort to map the genome of prehistoric canines.

“We need these steps to happen first before we can come up with a reasonable answer, a reasonable explanation of where dogs came from.”

Having already completed one of the most comprehensive genetic studies of prehistoric dogs to date, Losey and an international team of more than 50 researchers have turned their attention to the DNA of wolves from the end of the last ice age about 11,500 years ago.

Dogs were the first domestic animals, but little is known about their genetic history.

The oldest dog burial uncovered dates back about 14,000 years, but species emerged long before then.

A now extinct species of grey wolf likely gave rise to modern canines. However no one knows exactly where or when that happened.

Some think dogs arose from the Americas, while others have suggested dogs were domesticated twice, once each in Asia and Europe, though details are murky.

“No one has really come up with a long-standing answer that convinces people for more than a year or two until new data comes out,” Losey said.

“The best way to do this is to get this genetic diversity plotted out. And then we can answer this question that’s been lingering since Darwin’s time.”

Losey said mapping wolf DNA will help them “narrow things down” on the dog mystery.

Researchers currently know “almost nothing” about wolf diversity during the ice age, he said.

“If we do know what their genetic variation was during the ice age, then we would be able to say, ‘OK, this group of wolves here probably gave rise to dogs.’ But we don’t really have a clue about that.”

Losey’s job is to find DNA samples that have been unearthed from across Siberia for the project. Intact DNA samples that old are rare, but he has already found some promising specimens for the study. 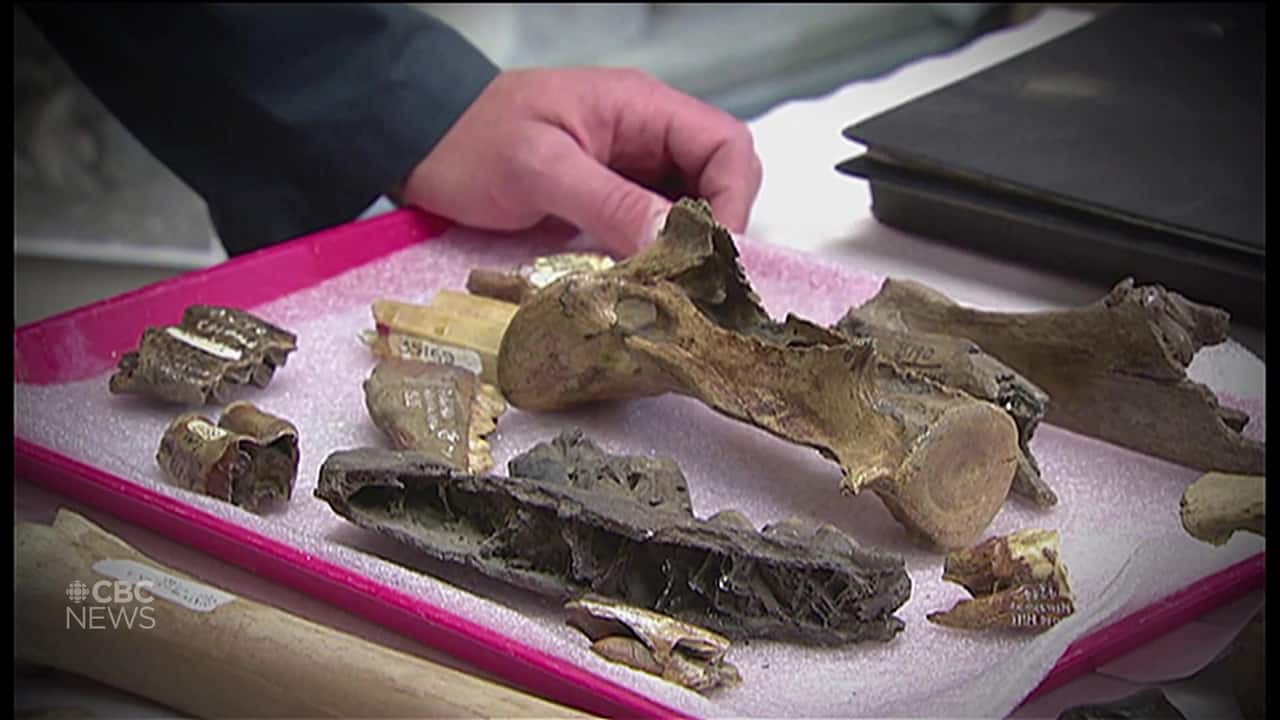 Researchers are mapping the DNA of wolves from the ice age in a bid to pinpoint the origin of the world’s first dogs. 2:28

His “favourite” is that of a wolf interred 50 kilometres from the location where a dog adorned with an elk-tooth necklace was buried near Lake Baikal in southern Siberia.

The well-preserved wolf in question was given a ceremonial burial near Irkutsk, Russia, around 8,000 years ago.

“It’s not actually in the ice age, it’s into the Holocene, but it’s still a very early specimen,” Losey said. “We know it’s a large adult male animal over 100 pounds. A big, big wolf.”

The remains are mystifying. The wolf was buried at a site that soon after became a large human-burial ground.

“There was some kind of reverence or honouring, respecting that animal when it died; it was given a burial,” Losey said.

“Then, in the 200 yards or so around that wolf skeleton, there are over 100 people buried. It was like they opened the cemetery for use for human burials.”

Losey and his colleagues have sequenced the genomes of 27 ancient dogs.

The researchers relied on genetic material recovered from fossilized remains, sifting through more than 2,000 specimens from Europe, Siberia, and the Near East, dating back nearly 11,000 years.

They also compiled 17 sets of human genomes from people living in roughly the same places and times as the dogs they had sampled.

The study, published in October, shows that the diaspora of dogs since prehistoric times mirrors that of humans.

The way in which we feel about dogs is not unique and it has a very deep history.– Robert Losey, anthropologist

Just as human ancestry changed, following mass migration events or the discovery of new trade routes, the lineage of dogs was also altered.

“It shows us that, at many points in the past, the really distant past,” (up to 9,000 years ago), “that we really didn’t have human migration events. We really had these multi-species groups that were moving into different parts of the continent.

“You had people that were coming with their dogs. You can see that if you look through time.”

In almost every analysis, the human and dog history matched up.

Losey said the best example from the research was the movement of agricultural peoples into Europe about 5,000 years ago.

When the first farmers migrated from what is now eastern Turkey, they brought dogs along.

“Previously, Europe was all occupied by foraging peoples, people hunting, gathering, fishing and so on. And then agriculture begins to develop in the Near East so people have sheep and goats, they have domesticated plants — and they have dogs. As agriculture spreads, so do people’s dogs.”

The study showed that, even 11 millennia ago, dogs had been domesticated long enough to produce five separate genetic lineages.

Losey said understanding the history of dogs sheds light on our own ancestors. Even thousands of years ago, dogs had already earned an important place in human societies.

“All of the foundations for our relationship with dogs emerged thousands of years ago,” Losey said. “The way in which we feel about dogs is not unique and it has a very deep history.”