Their practice facility is still under construction. The players and staff are on the hunt for temporary housing in Tampa.

As the NBA’s only team playing outside of its market — and country — this season, the Toronto Raptors have numerous hurdles to clear.

But team president Masai Ujiri said if there’s a unique trait about Toronto, it’s his roster’s ability to come together in the face of big challenges.

He expects nothing less in this bizarre campaign.

“Listen, this is not an easy task here,” Ujiri said on a Zoom video conference call Saturday. “There’s a lot of sacrifices to it. I know the whole world is sacrificing now and we are coming into a game and we’re working at a job that we love.

“When we decide this is something that we are going to do, we all want to do it together. I’m proud of this organization, honestly, to make this jump.” 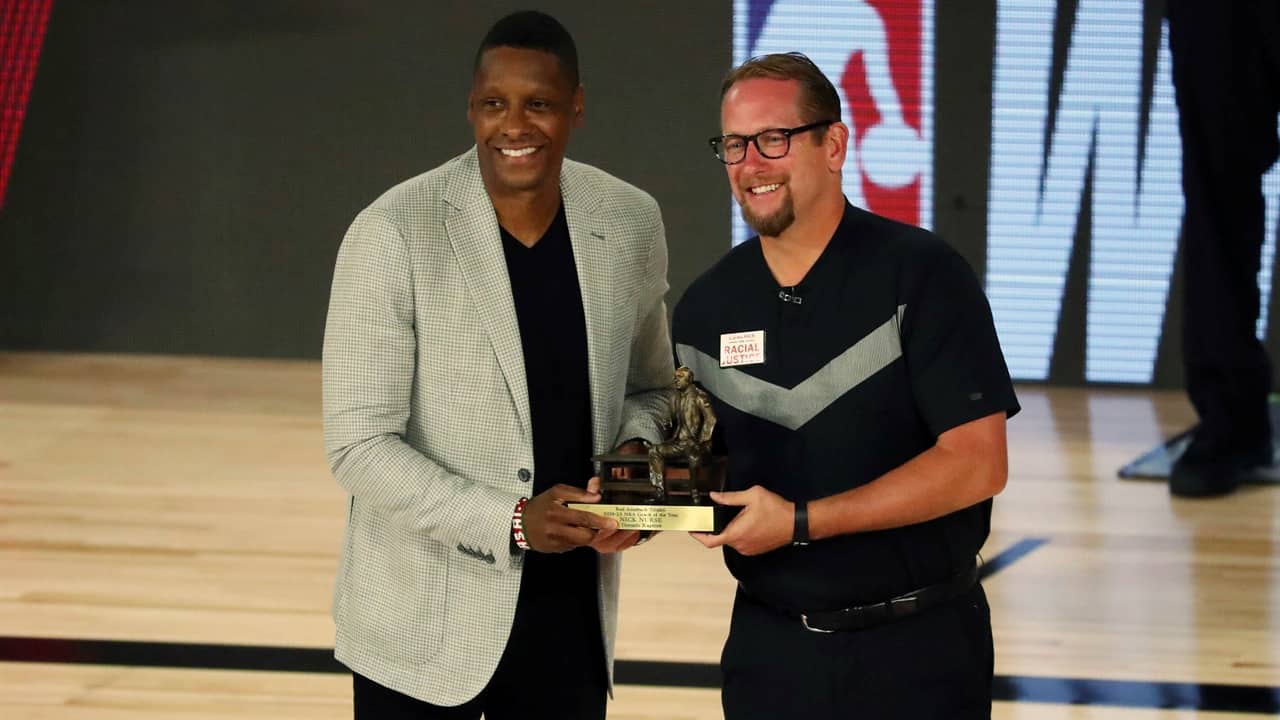 Toronto Raptors president Masai Ujiri discusses how his team is adjusting to life in their new environment. 3:06

The Raptors begin team practices Sunday in Tampa, where they’ll play their “home” games at Amalie Arena at least for part of the season due to Canada’s travel restrictions around COVID-19.

Ujiri spoke to the media for nearly 40 minutes Saturday, touching on everything from free agency and front-office contracts, to keeping the Black Lives Matter momentum going, and the 13th anniversary of Nelson Mandela’s death.

The Raptors learned less than three weeks ago they wouldn’t be permitted to play out of Scotiabank Arena. The last-minute location change has meant rushing to build a practice court in a hotel ballroom and finding the players and staff housing.

Supporting players, staff is No. 1

Replicating the comforts of Toronto’s OVO Centre practice facility won’t be easy, but Ujiri said if the team’s reaction to the bubble’s ballroom courts during the NBA’s summer restart is any indication, the team will adapt.

“I remember walking into the ballroom in the bubble almost the same time as Kyle [Lowry] and Fred [VanVleet]. I’ll never forget that image in my head. Right away they dribbled the ball and just got to it,” Ujiri said. “These guys are hoopers. There was no complaint, there was nothing, all they wanted to do was play. That’s how basketball players are, they see that hoop, they see that wooden floor and they just want to play.”

Ujiri, who is with the team in Florida and was also in the Walt Disney World “bubble” after the resumption of play, said priority No. 1 is supporting the players and staff in relocating.

“As the leader of the organization you try as hard as you can to make your staff, your players, everybody feel as comfortable as you can,” he said. “That’s why you always want to be in the environment that they are in too so that you are experiencing it with them.”

The global pandemic will determine whether the Raptors will be home before the end of the season.

Whether fans will be allowed at Amalie Arena for the 18 home games scheduled so far — the league has released only the first half of the season schedule — is still a question mark. Florida had over 10,000 new COVID-19 cases on Friday, and recently surpassed the one-million mark in total cases.

“We’re in the process of working all these things [out], and I don’t have definite answer for you, but the health and safety protocols are going to be important to us,” said Ujiri, who thanked the Orlando Magic for allowing the Raptors to play within the same market.

WATCH | Ujiri on the loss of free agents Ibaka, Gasol: Uncertainty around where they’d play pushed the renegotiation of staff contracts to the backburner, but Ujiri said GM Bobby Webster’s new contract is virtually a done deal.

There remains roster uncertainly around the future of Terence Davis, who faces seven charges, including assault and harassment after allegedly striking his girlfriend. Davis, who is with the team in Tampa, appears in court Dec. 11, a day before the Raptors tip off the pre-season at Charlotte.

Ujiri said the team must respect the process of the players’ association and the league’s investigation.

The Raptors revamped their front court in free agency after losing Serge Ibaka and Marc Gasol. With so much riding on the 2021 off-season and free agency, Ujiri said that limited “term and years” the Raptors could offer their former big men.

“Marc and Serge were incredible for our organization, and all of us have the same exact feelings about them,” he said. “Hard to see, but sometimes we have to move on from these things.”

The Raptors added Aron Baynes, a “guy that you don’t like on the other team and you love on your team,” Ujiri said, and Alex Len to fill the void.

The NBA’s developmental G League is also in limbo, and when — or if — it does tip off this season, Raptors 905, which runs out of Mississauga, Ont., faces the same travel restrictions as its parent club. That doesn’t mean they won’t figure out a way to play.

“I will say this, whatever the G League is doing, the Toronto Raptors and 905 will participate,” Ujiri said.

A CBC “kid reporter” posed the Zoom call’s final question to Ujiri, asking how young fans can follow the team while they’re not playing at Toronto’s Scotiabank Arena.

“We’re here! We’re on TV! You can see us — we’re not going anywhere,” Ujiri said to the young reporter. “We’re right here with you guys. And we’ll be back. We’ll be back soon enough. We’re going to give it our all, we’re going to try and play our best … this goes fast. A couple days ago we were in the bubble. We’re right here now.”