Pascal Siakam wants to rediscover his love for the game.

The Toronto Raptors forward struggled mightily in the NBA bubble near Orlando, Fla., when teams reconvened after the league’s three-month COVID-19 suspension earlier this year. He stressed about the pandemic, worried about family, and had a difficult time compartmentalizing his life and focusing on basketball when he needed to.

And he said when he looks back at footage of those games, he doesn’t recognize himself.

The 26-year-old from Cameroon has always played with joy. He saw none at Walt Disney World.

Siakam was having a career season before the global pandemic shut down the league, earning all-star honours for the first time. In the playoffs, though, he averaged 17 points and 7.5 rebounds while shooting 39.6 per cent from the field and just 18.9 per cent from three-point range. He had 13 points and five turnovers the Raptors’ Game 7 loss to Boston in the conference semifinals.

He worked with a strength and conditioning coach, chef and nutritionist in the brief off-season after his disappointment in his bubble play. 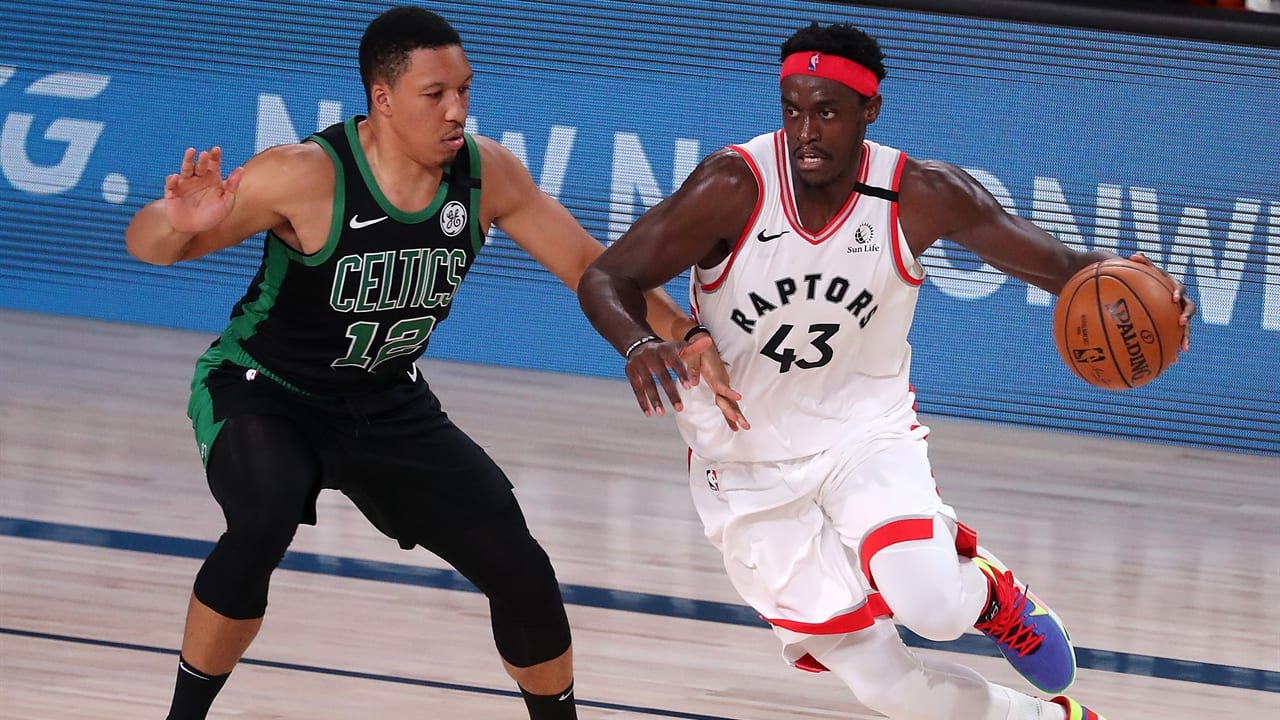 Despite his struggles in the bubble and his team not achieving their ultimate goal, Toronto Raptors all-star Pascal Siakam says he’s happy with the progress he’s made during the off-season and is excited for the future. 3:33

The night Toronto was eliminated, veteran guard Kyle Lowry recalled the painful days after the team was swept by Washington in 2015. He said he read every word printed about him — “Good, bad, evil, terrible, awesome” — and used it as motivation. He suggested Siakam do something similar.

But everyone deals with things differently, Siakam said.

Siakam sounded testy Thursday when a reporter suggested winning the 2019 NBA title was a surprise.

“What do you mean surprisingly? What does that even mean?” he scoffed.

The reporter went on to explain that Golden State had been favoured, and wondered if the Raptors get back to their 2019 form?

“We didn’t have the result that we wanted last year. For every good team when you go out there and don’t get the thing that you wanted to get, you go back to the drawing board, trying hard to get back to that level,” Siakam said.

Jevohn Shepherd talks with some of the biggest names in Canadian basketball about how the culture of the sport has changed over the past two decades, and if this is only the beginning of developing NBA stars. 7:18

The Raptors arrived in their temporary home in Tampa, Fla., on Monday, just a couple of weeks after learning they wouldn’t be permitted to play their home games, at least for the start of the season, at Scotiabank Arena.

Siakam said he still has to find a home in Tampa — the team is currently in a hotel.

“I like Florida. It’s cool. If I had to choose, I’d definitely be somewhere warm. So Florida was definitely a no-brainer,” he said. “Then again, we had to move everything, figure out practice facility, so much stuff to figure out.

“But nothing has been normal for a long time. We’re all learning. There’s nothing we can do about it. For me, I feel like my whole life has been travelling and being different places.”

Raptors newcomer Alex Len is similarly well-travelled. The Ukrainian big man has made NBA stops in Phoenix, Atlanta and Sacramento in his seven years, and had expected to re-sign during free agency with the Kings before receiving interest from the Raptors.

“It was not about the money, just the opportunity to play for a top-notch, great organization,” Len said, pointing out that in his seven seasons he’s never played for a winning team.

“It was just an amazing opportunity for me going forward, playing in the playoffs, being a part of a winning culture.”

Len praised the success the Raptors have had with international players, mentioning Siakam’s growth, plus Toronto’s reputation for player development.

“You see a lot of guys who came through here, international players and just flourishing. Even [Fred] VanVleet came in, nobody knew about the guy and you see three or four years later, he’s an all-star type player. So, everybody knows about the player development in Toronto, that’s for sure.”