The Toronto Raptors selected Flynn with the 29th pick in Wednesday night’s NBA draft, adding another small point guard with a strong defensive presence to their backcourt.

“I think it’s going to be great for me honestly, as a young guy coming in the league, with two guys who have won a championship, who have put up great numbers, there’s not much bad you can say about those two guys,” Flynn said. “I think it will be great for me to be around them every day and continue to learn.”

The six-foot-one, 185-pound guard led San Diego State to a 30-2 record and a No. 6 national ranking. He was also the Mountain West conference player and defensive player of the year. 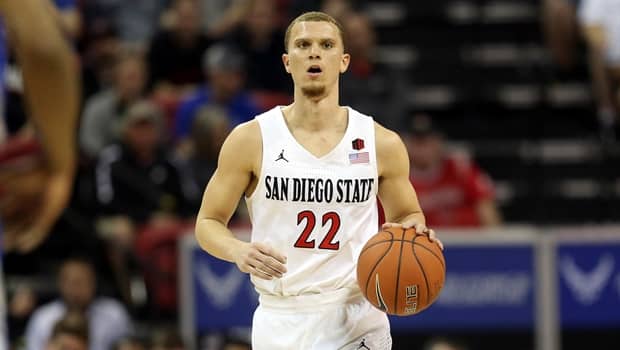 Flynn said he’s watched the Raptors and “how well they play,” and has paid particular attention to VanVleet and Lowry.

“They’re super savvy,” he said. “Kyle Lowry’s great at getting you in foul trouble, just keeping you on your toes, he knows what plays to make, he’s going to come up in big moments, he does all the little things.”

He’s inspired by VanVleet, who went undrafted but has worked himself into being one of this year’s most coveted free agents.

“He blew up and just continued to get better. He’s six foot, six-one, right around there, guys like that get (overlooked) so seeing him being able to win a championship and put up great numbers in the finals, it’s definitely inspirational for a guy like me,” Flynn said.

The Raptors spoke to Flynn early in the pandemic, and then went to see him two weeks ago in Las Vegas, a trip that sealed the deal.

“He’s a guy we really liked, and can come in and . . . develop under the leadership of Kyle and Fred,” Raptors GM Bobby Webster said. “Those are two guys for him to learn under.”

Webster said Flynn’s a modern NBA point guard, who has a complete game on the offensive end, plus defends at a high level.

The 22-year-old Flynn played two seasons at Washington State before transferring to SDSU. He averaged a team-high 17.6 points on 44 per cent shooting and 37.3 per cent shooting from three-point range, plus 5.1 assists through 32 games for the Aztecs.

Flynn, wearing a charcoal suit for the virtual draft, celebrated the night at his hometown in Tacoma, Wash., sharing a huge sectional couch with his parents and six older siblings.

Webster said it’s too soon to compare the newcomer to Lowry and VanVleet.

“Those guys are incredibly accomplished. I think as you guys will meet Malachi, he’s a serious kid. He’s professional. He’s about the hard work. He’s about winning,” Webster said. “So I think those will be the natural comparisons.”

The Raptors took Nevada guard Jalen Harris with the 59th pick. The 22-year-old Texan was a late bloomer after breaking his back in high school. He was excellent at Nevada last season, however, averaging 21.7 points, 6.5 rebounds, 3.9 assists and 1.1 steals.

This year’s draft was held virtually due to the pandemic and, originally scheduled for June, ended the longest pre-draft period in history. Because of the Canadian government’s border restrictions, the Raptors had to do much of their research online.

“It was tough,” Webster said of how Wednesday night unfolded. “Every pick would come in, and there would be some gasps and a little bit of disbelief. But you know, all along, Malachi was up there. And that’s who we wanted.”