Provincial officials say they are making changes to visitor policies at long-term care facilities in some areas of the province, as Ontario reported 554 new cases of COVID-19 on Tuesday.

Ottawa’s number is the highest daily count the city has seen since the start of the pandemic.

At his daily news conference Tuesday, Premier Doug Ford said that changes are coming to long-term care visiting rules in areas with high community spread of COVID-19. Officials indicated Ottawa, Peel and Toronto would fall under that umbrella, but did not clearly state any other regions.

As of Oct. 5, Ford said, visitors to long-term care homes in these areas will be restricted to staff, essential visitors and essential caregivers only.

Up to two individuals can be essential caregivers, the province says.

Ford also said the province is investing $540 million into the long-term care sector, which will go toward helping facilities with containment measures, staffing supports, renovations for infection control, and getting personal protective equipment (PPE).

The province is ensuring that every long-term care home in the province has a two-month supply of PPE, Ford said.

Ontario is currently reporting outbreaks in 46 long-term care homes. There were 78 confirmed active cases in residents on Tuesday, which marks an increase of 14.71 per cent. 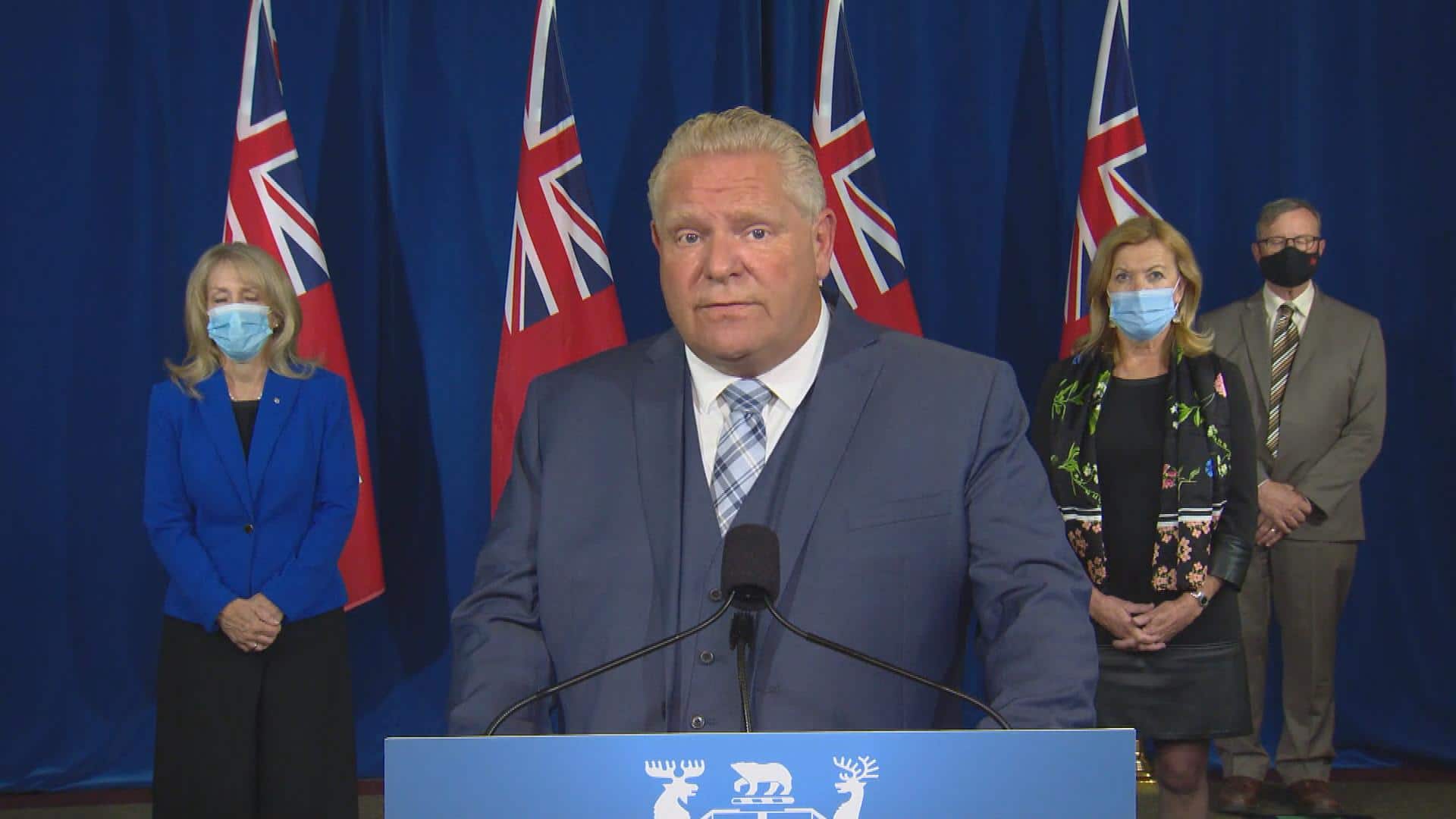 Health Minister Christine Elliott said in a tweet that 62 per cent of the new cases were found in people under the age of 40.

The province is reporting four new deaths, for a total of 2,844. A CBC count from public health units across the province, which contains more up to date figures, puts the real number at 2,880.

Hospitalizations rose by nine to 137, with 30 people now in ICU. Sixteen people are on a ventilator, the province says.

The province also marked 323 cases as resolved on Tuesday.

Ford has promised to take additional action to address a recent surge in COVID-19 cases.

Ontario reported an additional 700 cases of coronavirus on Monday, the most on a single day since the outbreak began in late January.

Ford says the province is experiencing a second wave of the virus and has said nothing is off the table to address the increase.

Meanwhile, Toronto’s top doctor is warning that it’s time for people in the city to stop allowing social bubbles, and to now limit interactions with anyone outside their immediate household or essential supports.

When asked Tuesday if the idea of social bubbles in Toronto was now shot, Dr. David Williams, the province’s medical officer of health, did not provide a straight answer.

Williams said the idea “is still one we value,” but added that questions remain over if people are maintaining them.

“We’ve seen a casualness and a movement away from that … it’s become very much less disciplined,” Williams said.

When asked how people should be preparing to celebrate Thanksgiving in a couple of weeks, Williams again did not clearly answer the question.

He said the province “may be asking” people to limit the number of people at a gathering, while also mentioning guidelines to ensure people cook their turkeys properly.

Ontario is also reporting 64 new COVID-19 cases related to schools, including at least 37 among students.

Those bring the number of schools with a reported case to 250 out of Ontario’s 4,828 publicly-funded schools.

Still have questions about COVID-19? These CBC News stories will help.

Will Ontario be able to track down everyone who came in contact with those who have COVID-19?

Is another lockdown coming in Ontario? What do we know about the Ford government’s fall plan?

What’s the latest on where I should get tested?

It’s confusing, but here’s an explainer complete with a flow chart

What’s the most recent guidance on mask use?

Who is getting COVID-19?