The fireball that lit up the sky across the Prairies on Monday morning was a small piece of a comet that burned up in the atmosphere, researchers at the University of Alberta say.

“Using two observation sites, we were able to calculate both its trajectory and velocity, which tell us about the origin of the meteor and reveal that it was a piece of a comet,” Patrick Hill, post-doctoral fellow in the Department of Earth and Atmospheric Sciences, said in a news release Thursday.

“This chunk was largely made of dust and ice, burning up immediately without leaving anything to find on the ground — but instead giving us a spectacular flash.”

The flash, captured by dozens of doorbell cameras and dashcams, occurred at 6:23 a.m. local time as the debris streaked through the sky to a final point on its trajectory 120 kilometres north of Edmonton, the researchers said.

The flash was visible throughout Alberta and parts of Saskatchewan due to the unusually high altitude of the fireball, they said. 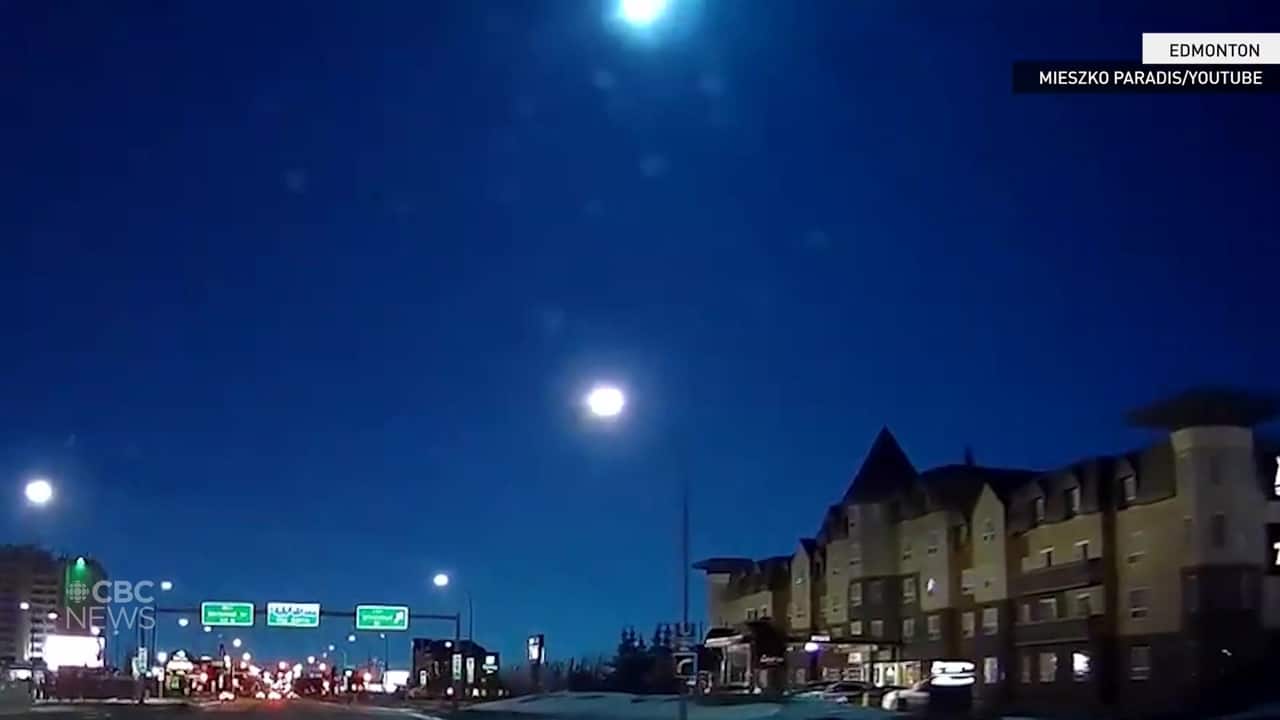 A fireball buzzed over the Prairies on Monday, temporarily piercing the dark of the early morning sky with a flash of blinding blue light. 0:48

The chunk, likely only tens of centimetres across in size, was travelling at more than 220,000 km/h when it entered the atmosphere, they said.

“This incredible speed and the orbit of the fireball tell us that the object came at us from way out at the edge of the solar system — telling us it was a comet, rather than a relatively slower rock coming from the asteroid belt,” Chris Herd, curator of the University of Alberta Meteorite Collection and science professor, said in the release.

“Comets are made up of dust and ice and are weaker than rocky objects, and hitting our atmosphere would have been like hitting a brick wall for something travelling at this speed,” Herd said.

‘This is an incredible mystery to have solved’

While rocky objects usually burn up between 15 to 20 kilometres above the ground, Monday’s fireball occurred at an altitude of 46 kilometres allowing the flash to be seen across a wide area.

“All meteoroids — objects that become meteors once they enter Earth’s atmosphere — enter at the same altitude and then start to burn up with friction,” Hill said.

“Sturdier, rocky meteoroids can sometimes survive to make it to the ground, but because this was going so fast and was made of weaker material, it flashed out much higher in the atmosphere and was visible from much farther away.”

The research team calculated the trajectory of the fireball by using dark-sky images captured at the Hesje Observatory at the Augustana Miquelon Lake Research Station and at Lakeland College’s observation station in Vermilion, Alta., the release said.

“This is an incredible mystery to have solved,” Herd said. “We’re thrilled that we caught it on two of our cameras, which could give everyone who saw this amazing fireball a solution.”