Pablo Piatti scored in the 89th minute to lift Toronto FC to a 1-0 win over Atlanta United on Sunday night, extending its undefeated MLS run to nine games.

Substitute Richie Laryea made the play, teasing a defender before sending in a cross to Piatti, who flicked a header past Brad Guzan and in off the post for his fourth goal of the season.

It marked Toronto’s seventh 1-0 win of the season and 10th victory overall by a one-goal margin.

Scoring chances had been few and far between at Pratt and Whitney Stadium at Rentschler Field. Despite coming into the game 19 points below Toronto in the standings, Atlanta proved to be a tough nut to crack.

After a quiet first half, Atlanta (5-10-4) showed more teeth in attack when it brought on designated players Ezequiel Barco and Marcelino Moreno at halftime. Atlanta’s lone shot on target came in the 68th minute with goalkeeper Quentin Westberg forced to make a smart save off a downward header from substitute Erick Torres.

Atlanta, which ranks 23rd in the league in goal-scoring, is winless in four games (0-1-3) during which it has scored just once.

TFC had won five straight matches prior to a 1-1 midweek tie with the New York Red Bulls. 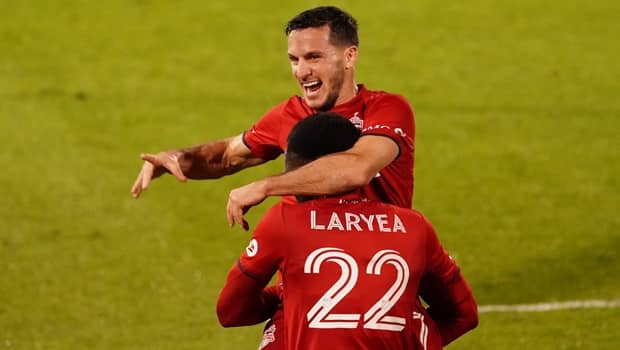 Atlanta was coming off a 1-1 midweek tie with Inter Miami and had won just one of its previous five games (1-2-2). The Five Stripes came into the game in 11th place in the East, one place below the playoff line.

Toronto captain Michael Bradley, who missed the last nine games with a knee injury, came on in the 20th minute to replace Jonathan Osorio, who was feeling tightness. It marked only Bradley’s second substitute appearance in 201 career MLS regular-season matches.

The game was the fifth in 16 days for both teams.

Barco had missed the last seven games through injury. Moreno, an Argentine midfielder signed on Sept. 22, played 61 minutes in his Oct. 10 debut — a 1-0 loss to the Red Bulls — but did not figure against Miami.

There were dangers signs early, with an Atlanta giveaway leading to an Alejandro Pozuelo shot that was on target but lacked pace in the third minute. The Spaniard had another chance five minutes later but his shot went straight at Guzan.

At the other end, Mexican winger Jurgen Damm tested the left side of the Toronto defence.

Omar Gonzalez’s header off a Toronto corner in the 40th minute when straight at Guzan. Seconds later, Bradley found Piatti whose hard shot was parried away by Guzan.

Pozuelo’s swerving shot was off target in the 52nd minute.

The last meeting between the two teams was in the Eastern Conference final in October 2019 when Toronto prevailed 2-1 in Mercedes-Benz Stadium thanks to a 78th-minute winner by DeLeon.

Guzan was the only returnee from that playoff game in Atlanta’s starting 11 Sunday, Toronto had seven of its starters from that game in its opening lineup.

Toronto was slated to charter home after the game to spend two days with family, under quarantine, before returning to East Hartford to prepare for a game next Saturday in Philadelphia. TFC has four regular-season games remaining.