Alberta’s race against coronavirus variants in the coming months depends on the public’s ability to follow public health rules, but some experts fear a continued lack of consequences for some protesting essential measures could cripple the province’s pandemic response.

Justice Minister Kaycee Madu and municipal officials like Mayor Naheed Nenshi told the public: The time for education is over in November 2020.

Yet there are weekly examples of some Albertans defying public health rules by marching unmasked through malls, worshipping at over-capacity church services and walking out on mandatory hotel quarantine. All without any apparent consequences, apart from a handful of tickets.

Some experts told CBC News that allowing these demonstrations to continue is dangerous. It can erode faith that these measures are necessary, and discourage compliance — which, in turn, hampers the province’s ability to fight the pandemic.

Especially, as more transmissible COVID-19 variants threaten the gains Alberta has made to bring down case numbers in recent weeks.

“If the enforcement is simply going to be something symbolic or a token … but doesn’t actually prevent a future such transgressions or deter a group or people from doing this again, then that’s not going to be effective,” said Dr. Tehseen Ladha, an assistant professor in pediatrics at the University of Alberta.

“That sends a message to the community that these rules aren’t important, that perhaps we are safe without following these rules and we’re not.”

Ladha said a third pandemic wave is imminent. The threat of COVID-19 mutations and variants, the race to vaccinate the public and contain the spread depend on public will to follow health restrictions.

But, from what she’s seen, enforcement across the province doesn’t have enough teeth to nab repeat offenders — as well as those posing high-risk to public health.

Freedom protestors marched maskless through Chinook Centre mall over the long weekend, escorted by police. A video showed one officer shaking a protestors hand, leaning in close to speak to the man directly in his ear.

The mall’s management, in a statement, said it didn’t condone the protest. Police said the lack of physical distance, the leaning in, was all part of a negotiation that saw protestors peacefully leave the mall.

In some cases, like the Grace Life Community Church, sanctions in December, closure orders in January and tickets were ignored. Up until last weekend large, over-capacity services continued inside of the Parkland County church.

“The danger of a situation like that being allowed to go on unregulated for such a long period of time, even more than one service … when you have potentially hundreds of people in a church unmasked and not necessarily distanced, talking and singing, those are examples of what we call super spreader events,” Ladha said. 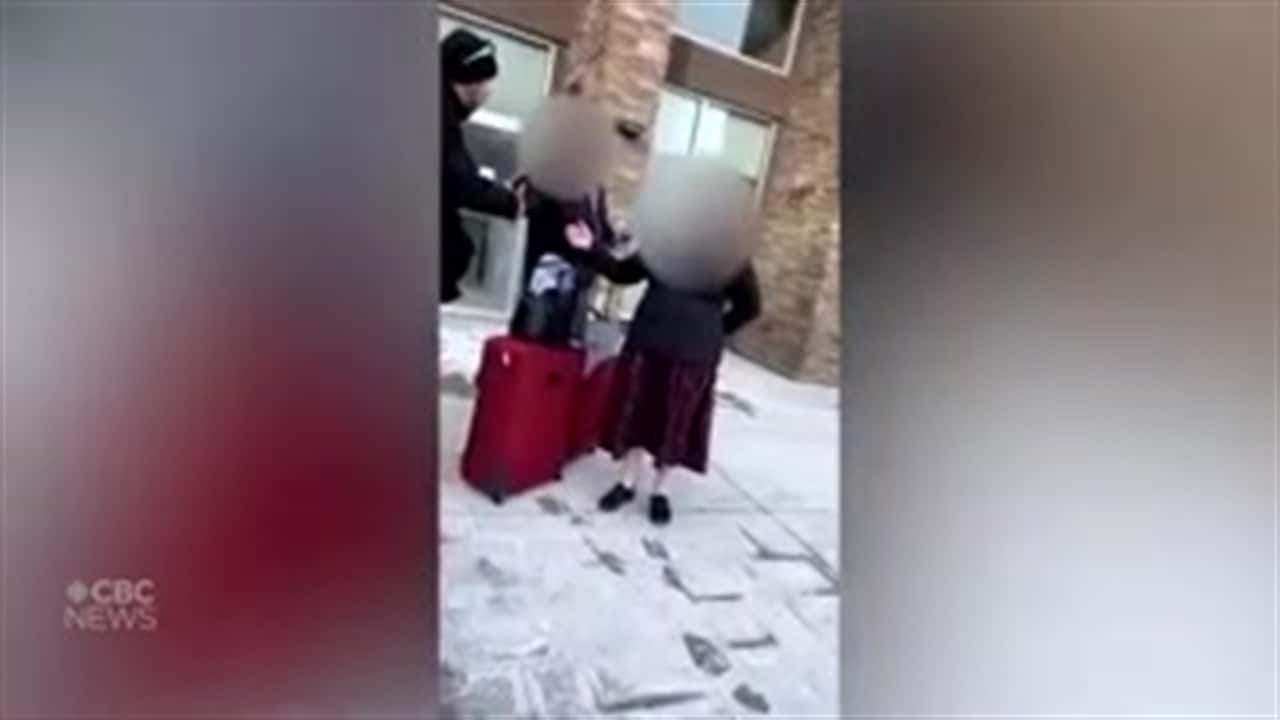 Early in February, a small group of protestors coached a couple out of mandatory hotel quarantine over the phone in Calgary, telling them to simply walk out. Police were present as the couple loaded their suitcases into a white van, driving by the officers and their cruiser without incident as protestors cheered.

The Calgary Police Service confirmed there is an ongoing investigation into the hotel incident, but no summons were issued.

“Please don’t take the perceived appearance of lack of enforcement, as a reflection of our intent to ticket those who flout the law,” read a statement issued by Calgary Police Service. “We will make every effort to play our part in enforcement.” 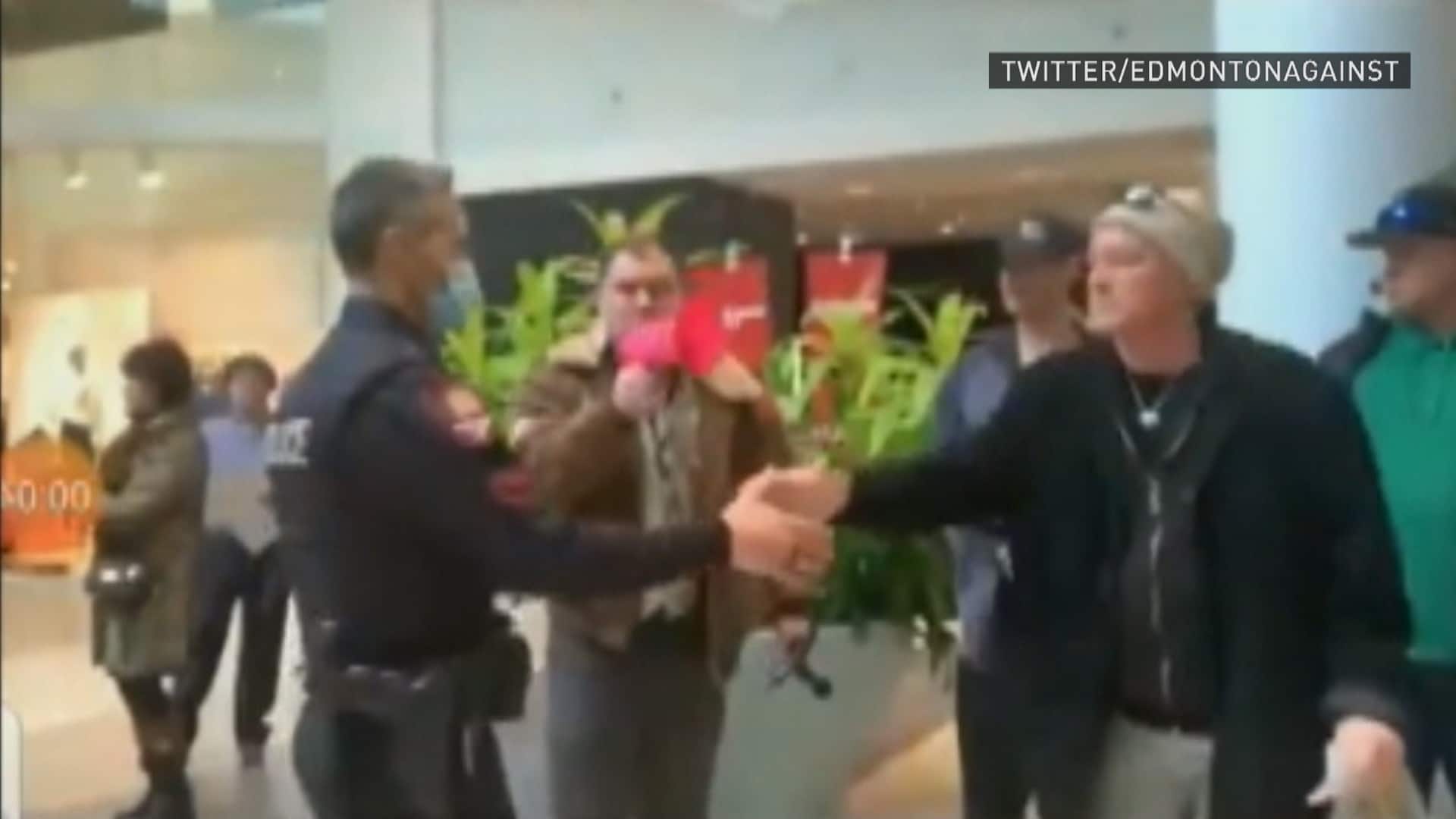 Calgary police said a video showing an officer shaking the hand of an anti-mask protester captured the end of a peaceful negotiation. They are committed to investigating the full scope of the protest, although no tickets were issued on the day. 3:12

As for public health enforcement, Hinshaw defers to the expertise of police.

“There are many cases when that first step does result in better partnership with those individuals, of course when that fails it has always been supported to take the steps that are necessary,” Hinshaw said.

“Those decisions are made by the independent officers in Alberta Health Services and law enforcement officers to enforce in the ways they believe appropriate.”

People tend to put trust in health officials, and are more skeptical of politicians, according to Fazel’s research. Alberta, he said, has had its fair share of politicians questioning the need for lockdowns, some even defying them.

This muddies the waters.

“When we do public health messaging, you want to increase the risk perception of COVID-19 such that people do not panic, but they are fearful enough of it,” Fazel said.

“And when you have mixed messages, when people say one thing, but they do another thing … for somebody who is actually following the recommendations, it’s a big blow to them personally.”

Some are risking bad behaviour because they have weighed the risk of getting caught, and paying a fine. And then, there are groups who think the current rules aren’t legally valid and are actively pursuing constitutional challenges.

While the current public health acts may impede on freedoms, Hardcastle said a public health emergency may supersede those rights.

But it’s for the courts to decide.

Hardcastle said law enforcement has an incredibly fine line to walk when it comes to enforcement strategies. In some instances, enforcement can come across as heavy-handed, while other examples, like these ongoing protests, could be seen by the public as a failure to enforce.

“These very public examples of defiance, particularly those people who are actively encouraging others to defy the laws, I don’t think we can let that go on,” Hardcastle said.