The popular singer of O Canada at the Vancouver Canucks hockey games says he knew he might lose his job for standing up against what he describes as the “tyranny” of COVID-19 restrictions.

Mark Donnelly sang the anthem at an event called the Christmas Freedom Rally in Vancouver on Saturday, where hundreds of people protested restrictions imposed by B.C.’s provincial health officer.

Donnelly told the crowd, many of whom weren’t wearing masks or physically distancing, that he decided to sing because he questions the “draconian lockdown protocols.”

“What was originally sold as 15-day hunkering down sprint for the common good has turned into a 10-month marathon from hell, where the finish line is constantly being moved further into the distance,” he said.

He said he doesn’t think health officials have done a cost-benefit analysis looking at the harms of the restrictions compared with preventing the spread of COVID-19.

“As someone known for singing our great national anthem, I’m standing up against what I feel is tyranny, plain and simple,” he said to applause and cheers from the crowd.

Donnelly said his firing is censorship by an institution that he’s followed for 50 years and been publicly associated with since 2001.

“Sports figures, entertainers, politicians, et cetera, can stand for anything as long as it supports the narrative. You can support rioting, looting, destruction of livelihoods and reputation, but take a position against the narrative and you are worthy of exile or worse.”

Donnelly said he hasn’t had direct contact with Aquilini or the Canucks and if he is no longer with the team, a phone call would have been a more respectful way to find out his reasons for taking part in the rally.

He had hoped the ownership and management of the Canucks would have had the “courage to support the freedom to express [a] science-based position that is for the greater good of the country,” he said.

On Saturday, Canucks COO Trent Carroll said in a statement that the organization hoped that people understood that Donnelly was not representing the team with his views.

“We encourage everyone to wear a mask and to follow the provincial health orders. They are in place to help everyone in B.C. to stop COVID-19 from spreading in our province.”

After listening to speeches on Saturday at the Vancouver Art Gallery, the protesters then took to the streets in a march.

She said mass arrests or ticketing could escalate an already tense situation.

“This position does not automatically guarantee anyone special privileges at a protest. The bottom line is people who are contravening the public health order, they could be issued a ticket. Officers are using discretion with each situation that arises.”

B.C. health officer Dr. Bonnie Henry said last month that she has “no time for people who believe that wearing a mask somehow makes them ill or is a sign of lack of freedom.”

Instead, she said wearing a mask is about respect for those who are suffering through the pandemic together. 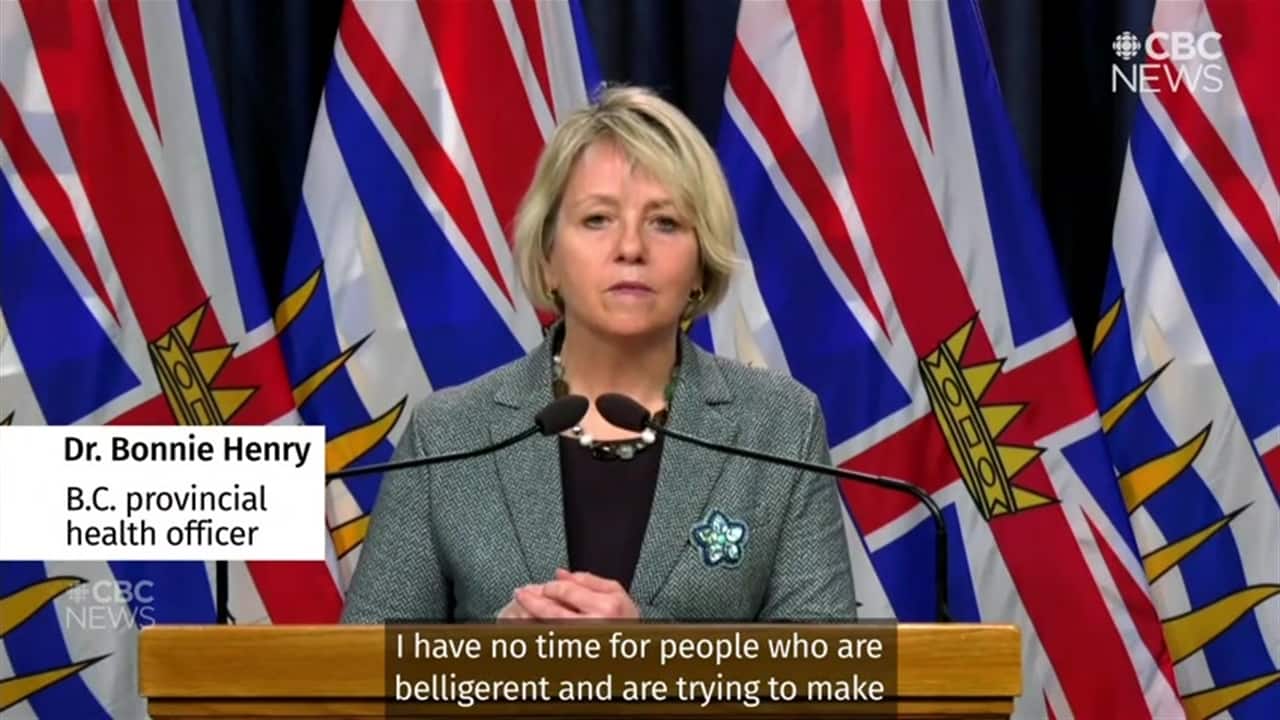