His doomed crusade to overturn the U.S. election result crossed a milestone following electoral college meetings Monday that formally selected Joe Biden as the next president.

Not in a century and a half, since the post-Civil War era, has a defeated presidential candidate continued to challenge the results past those electoral college meetings.

That’s where Trump now finds himself. He has persisted in peddling the idea he can still win even after losing Monday in the formal electoral votes.

He not only denied the electoral college reality in a flurry of defiant tweets: Trump’s campaign also convinced groups of Republicans to organize their own parallel meetings in various swing states and declare him the winner.

It’s part of a no-hope effort to persuade the U.S. Congress to call the election result erroneous and to vote to overturn it.

“This is off the charts,” said Alexander Keyssar, a professor at Harvard University’s Kennedy School of Government and author of a book on the history of the electoral college.

Keyssar said there have often been arguments about elections, and recounts, and even court fights like the one in 2000 between George W. Bush and Al Gore.

There was also a protest from a few Democrats who delayed, by a couple of hours, congressional certification of Bush’s win in Ohio in 2004.

But what’s novel, he said, is the losing candidate insisting on fighting after 538 voters of the electoral college formalize the results across the country.

That threshold was breached Monday.

Trump allies suggested they intended to keep the struggle going until a final showdown: when members of Congress meet on Jan. 6 at 1 p.m.ET to complete the final step in the selection of the president. 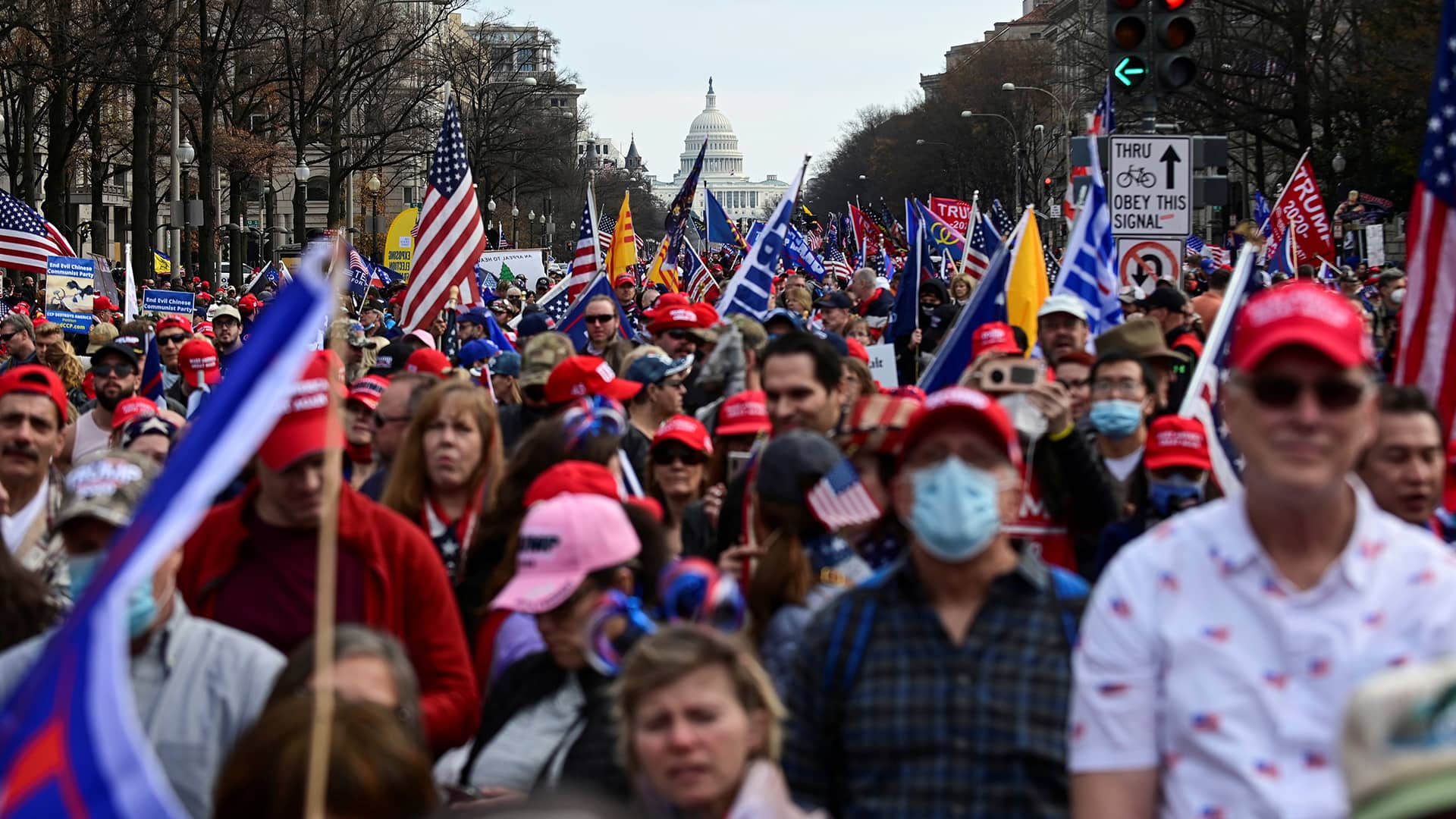 The congressional numbers simply aren’t there for him: For Trump to get the required simple majority in both houses of Congress to nullify certain states’ votes, he would need a string of unprecedented and, frankly, unfathomable developments.

For starters, the Democratic-controlled House of Representatives would have to agree to it. It’s highly unlikely he would even get the tiny Republican Senate majority to go along, given that several Senate Republicans have already recognized or even congratulated Biden on his win. Both chambers would need to nullify the results in at least three states, strip Biden of at least 37 electoral votes to keep him under the 270 majority, and then to force what’s called a contingent election in which each state delegation in Congress gets a vote.

There’s no sign Trump has the required support even within his own party — as a growing number of Republican lawmakers declared Monday, either bluntly or tentatively, that it’s over and Biden has won.

In state capitals, a number of top state-level Republicans have also made clear they won’t help Trump fight the result through their own legislatures.

The author of a two-year old paper that previewed how mail-in ballots could prompt legal feuds and chaos said this is it for Trump.

Edward Foley said that after dozens of court losses, and after Monday’s 306-232 loss in the electoral college, Trump can try whatever he wants with Congress.

“It’s still not going to affect the result,” said Foley, director of Ohio State University’s election-law program and author of different books on the electoral college and disputed elections.

But he said the prolonged feud can still damage the country.

At least four people were stabbed and one was shot last weekend during election-related street confrontations between opponents and supporters of the president in Washington, D.C., and Washington State.

In Arizona, the meeting took place in an undisclosed location.

In Michigan, Chris Cracchiolo accepted a police escort to the event in the state legislature; police had urged lawmakers to avoid the building because of credible threats of violence.

“I wouldn’t have believed it,” Cracchiolo said in an interview, referring to the tension surrounding the vote.

“So many things over the last four years have shocked me. … So many things [where] I just shake my head and say, ‘I’ve never seen this before.'”

Cracchiolo, a sales representative for three decades for AT&T, is now a volunteer with the state Democratic Party. At a meeting this past summer, he was selected by members in his area to be one of Michigan’s 16 electors.

He said he felt a bit nervous during the three-hour drive Monday from his home in northern Michigan to Lansing, the state capital.

Ultimately, though, he saw very few pro-Trump protesters on the way into the legislature; after the meeting, he waved off the offer of a police escort and walked back, unsupervised, to the parking lot.

He said he’s hopeful American politics will get back to a calmer place after the pandemic. He said the incoming president, Biden, is well-suited to that nation-soothing task.

Yet events elsewhere on the Michigan legislature grounds suggested dreams of national unity may have to wait a while.

A group of Michigan Republicans arrived for a planned meeting to choose a competing slate of Trump electors and were told to leave by a police officer.

At the Trump campaign’s request, such unofficial electoral college meetings were held by Republicans in different states, in Arizona, Pennsylvania, Georgia and elsewhere.

“We’re going to send those [competing lists] up to Congress,” Miller said.

Meanwhile, the campaign will keep fighting in court, arguing that states failed to follow election laws, and hope that some court victories persuade Congress to appoint Trump in its Jan. 6 votes.

The Trump campaign has lost dozens of court cases so far.

In Pennsylvania, Marian Moskowitz arrived for her meeting at an undisclosed location.

As a member of the electoral college she knew the plan was to meet at the Forum auditorium in the state capital of Harrisburg.

But the site was kept secret from the public for security precautions. Moskowitz, an early Biden supporter, got a call from the party last month inviting her to be an elector.

“It was just so overwhelming. So humbling and exciting. All these emotions go through you,” she said, expressing pride in being able to cast a vote for the first female vice-president, and first Black vice-president, Kamala Harris.

She pulled up to a parking garage and a shuttle transported her to the meeting location where 20 Pennsylvanians voted for Biden.

“I am concerned. I think we can see now with this president how vulnerable our democracy truly is. That one person can change the way we function.”

Biden, for his part, saluted the resiliency of the U.S. electoral system.

In a speech Monday night, he said there’s now evidence that nothing — not even a pandemic, or an abuse of power — can extinguish American democracy.