Members of the hockey world are mourning the death of Alex Trebek, the legendary Jeopardy! game show host.

A handful of National Hockey League teams, players, and even commissioner Gary Bettman released statements and tributes in light of Trebek’s death. The Sudbury, Ont., native died at home Sunday morning while surrounded by loved ones.

“Alex was a true and much beloved Canadian icon, and a very special member of the Ottawa Senators family,” Melnyk said. 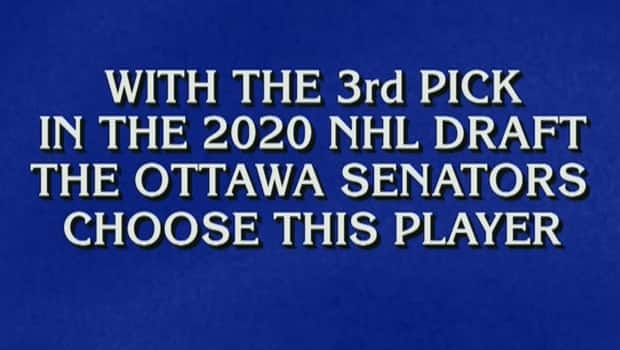 Alex Trebek, the host of ‘Jeopardy!’ and University of Ottawa graduate, announces that the Senators selected Tim Stuetzle as the 3rd overall pick of the 2020 NHL draft. 0:58

Trebek announced the Senators’ third overall draft choice, Tim Stuetzle, this past October in a recorded video message from the Jeopardy! set.

“I am deeply sorry to hear about the death of Alex Trebek. I was looking forward to meet the person who drafted me,” the German teenager wrote. “He shared this unforgettable moment with me and I am very thankful for that. With my deepest condolences REST IN PEACE MR.TREBEK.”

NHL Commissioner Gary Bettman on the passing of Alex Trebek. <a href=”https://t.co/w3fPlDBLdu”>pic.twitter.com/w3fPlDBLdu</a>

Commissioner Gary Bettman said he considered Trebek a “passionate fan” and a “true friend” of the NHL.

“He always said ‘yes’ when hockey called,” Bettman wrote in a statement. “We will miss him and send our condolences to his family and millions of friends and fans.”

The Montreal Canadiens, Trebek’s favourite team growing up, posted their respects on Twitter in both English and French.

“We’re saddened to learn of the passing of Canadian legend and noted hockey fan Alex Trebek. Rest in peace Mr. Trebek,” the organization said through its Twitter account.

Alex Trebek was a fighter, a gentleman, and a legend. Just like many fans, I also enjoyed watching jeopardy growing up. I’m happy I got to meet the man. Sending love to Alex’s family. RIP🙏🏿❤️ <a href=”https://t.co/kNsv3VNzQw”>pic.twitter.com/kNsv3VNzQw</a>

New Jersey Devils defenceman P.K. Subban posted a video of him meeting Trebek, where the host lamented his departure from the Canadiens. Subban was traded from the Canadiens to the Nashville Predators in June 2016.

“Alex Trebek was a fighter, a gentleman, and a legend. Just like many fans, I also enjoyed watching [Jeopardy!] growing up. I’m happy I got to meet the man. Sending love to Alex’s family. RIP.” Subban tweeted.

The Tampa Bay Lightning, the Florida Panthers, the Los Angeles Kings, as well as both Hockey Canada and USA Hockey expressed condolences to Trebek on Twitter.