It’s Bev Priestman’s first week on the job as head coach of the Canadian women’s soccer team and she’s already jumping in with both feet.

With the Tokyo Olympics nine months on the horizon, there’s really no other way.

Between the Rubik’s cube schedule of virtual one-on-one meetings with players and staff, to watching more than a handful of matches, Priestman has barely had time to let the news of last week’s appointment sink in. If anything, she says, she’s even more excited to get going.

“Initially, it’s to understand a little bit,” she told CBC Sports of her most-immediate priorities. “It’s been two and a half years since I left Canada. To understand where [the players] are and merge that with where I feel the group can go and ultimately get us focused short term on this Olympic Games.”

In Priestman’s hire, Canada Soccer went with a coach with strong ties to the national program. The 34-year-old native of Consett, England, returns after spending the last two seasons as an assistant with the Lionesses under Phil Neville. Prior to that, she spent five years serving as director of Canada’s EXCEL developmental program as well as head coach of the women’s under-17 and under-20 teams. She also served as an assistant with John Herdman at the 2015 FIFA Women’s World Cup and the 2016 Rio Olympics, where the team won its second-straight Olympic bronze medal.

WATCH | Canada’s new coach Bev Priestman has her eyes set on the podium in Tokyo: 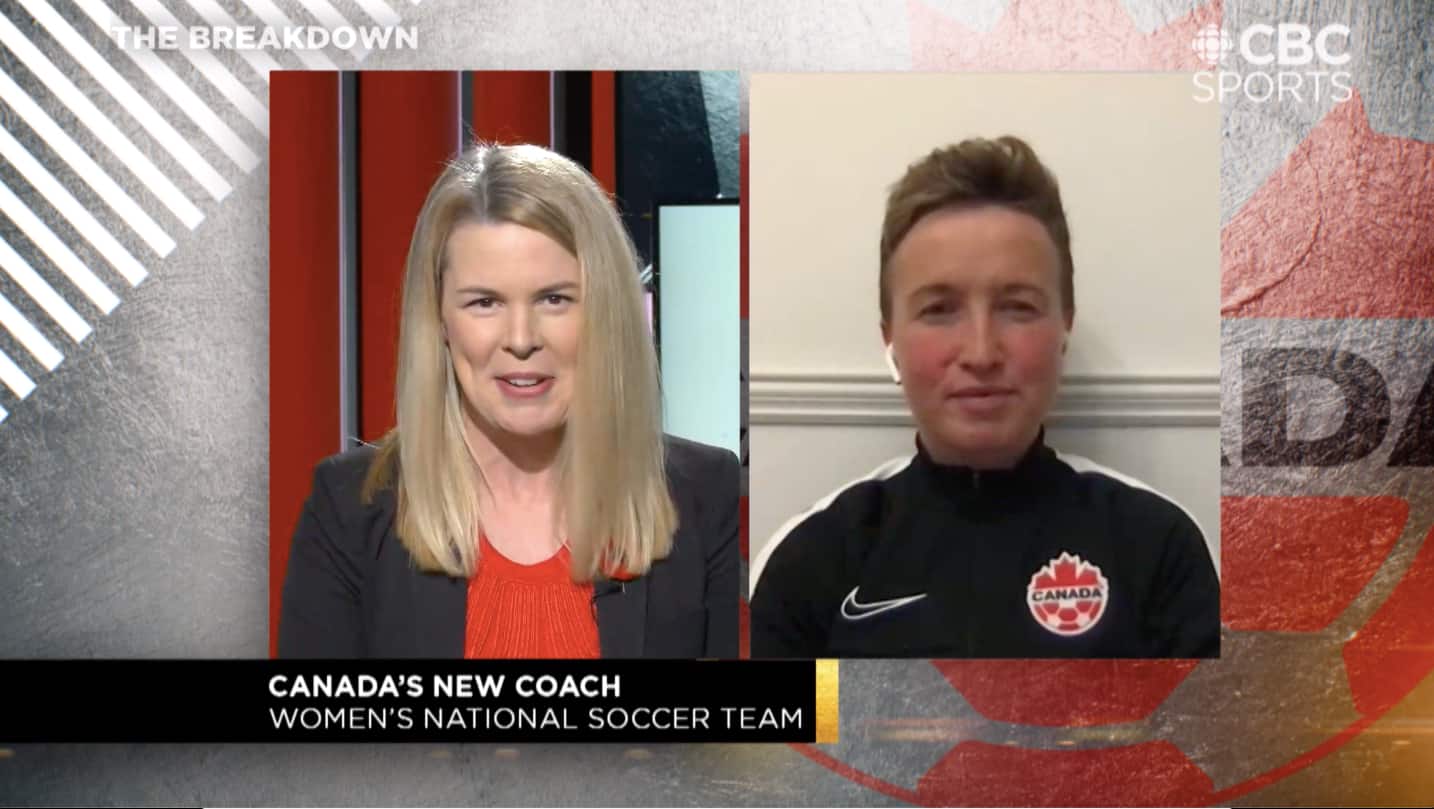 It’s no secret the Olympics have been this team’s signature tournament. And while the Canadians made history by winning bronze medals in back-to-back Games in 2012 and 2016, just being on the podium isn’t good enough anymore, Canadian winger Janine Beckie told this reporter in September.

“Definitely it’s gold. It’s No. 1. We’ve made history going back-to-back podiums. And that’s become not good enough in our minds” Beckie said of the team’s objective for Tokyo.

“All of us have that deep dream to be world champions and we believe we have the quality and talent to do it.”

“To get anyone excited – and some of our players have two bronze medals already – you have to change the colour of the medal. You’ve got a really experienced group merged with the hungry, young group. You put those together and you’ve got a key ingredient for success. The key now is getting them crystal clear on what we’re going after. Really simplifying things, we can’t do everything in nine months.

“We’ll give it a real good crack, that’s for sure.”

Preparations for Tokyo and beyond

Along with the ominous Tokyo deadline on the calendar, there is the reality that some tough roster decisions have to be made. Only 18 players (plus four alternates) can be named to the Olympic squad. Canada has a “long list” of 35 players that will be submitted to FIFA in December and the team will be chosen from that list.

“I’m realistic in the sense that there’s definitely a group of players on the radar, as well just outside of that,” Priestman said. “It’s being clear about what’s for now, what’s for the next nine months and then what’s for moving toward 2023 and 2024. It’s about getting that blend right.”

That also goes for her support staff, who have yet to be named. There is a current group of staff that she says she’s had a great relationship with in the past, singling out former Canadian international Rhian Wilkinson.

Wilkinson, who has vaulted up the coaching ranks and was also believed to be in the running for the head coaching job, was Priestman’s assistant for a period of time. The two-time bronze medallist with 181 caps to her credit has done a lot of legwork while the team was without a coach after Kenneth Heiner-Møller stepped down to rejoin the Danish Football Association as head of coach education.

Of the current staff, Priestman said she first needs to know where they want to be and marry that with what she needs around her to succeed, but that “they understand what it means to be Canadian, they’ve experienced some massive highs with that group and some massive lows, and I think you can’t buy that experience. It’s not a case of taking what I’ve got in England and dumping that in Canada. It’s working with that group that’s in place.”

Due to the COVID-19 pandemic, Priestman won’t get to see the core group of players together in a training environment anytime soon. Earlier in October, Canada Soccer cancelled a planned camp in England on the advice of federal public health officials.

With the current reality, Priestman says you have to find ways to adapt, but one thing she’s realized during her time in England is the role the players’ professional teams play.

“We only have the players together for a short amount of time, so having our best players in the best leagues is really important,” she said. “How you work with the player in their own environment, work with their coaches and then when you do come together as a group, just being really clear about what it is we’re going after.”

She’s had the opportunity to take in some of her European-based players in person and on television. She’s been in London this week to watch Jessie Fleming’s Chelsea defeat Shelina Zadorsky’s Tottenham 2-0 and, this past weekend, she caught Beckie’s 3-1 goal to seal Manchester City’s FA Cup win.

“[Beckie] got on the pitch for a short period of time, made the absolute most of that moment, delivered when it counted and I was absolutely thrilled to see her score with such a tough finish.”

For the moment, Priestman is navigating the early days of her tenure from Warrington, England, a town midway between Liverpool and Manchester. Plans are in the works to move back to Canada with wife Emma and two-year-old son Jack in early 2021.

As for where she’ll be based?

“I love my skiing, so Vancouver is high on the list.”