Newfoundland and Labrador’s top doctor announced 50 new confirmed cases of COVID-19 Friday, in a whirlwind week that has brought metro St. John’s to a standstill.

Schools and non-essential businesses in the capital and surrounding municipalities were closed Thursday to regain control of this week’s spiralling outbreak, forcing nearly half the province’s population into its second lockdown since last March.

While Friday’s report was exactly half of the 100 cases announced on Thursday, Health Minister John Haggie cautioned that the drop doesn’t indicate the province is out of the woods.

“Simply because today’s numbers are lower than yesterday’s does not mean that anything could be or should be read into that,” he said in Friday’s briefing.

Virus popping up in central region

While the sources of infection for the Central Health cases haven’t yet been identified, the province’s chief medical officer of health, Dr. Janice Fitzgerald, warned that the virus is likely on the move, showing up in communities far from the capital.

She reiterated the province’s new protocol, which encourages anyone with a single symptom of COVID-19 to book a test.

“As we expected, we are starting to find cases outside of the metro area, spreading through the Avalon and beyond,” she said. “So no matter where you live in Newfoundland and Labrador, you need to get tested, even if you have one symptom.” 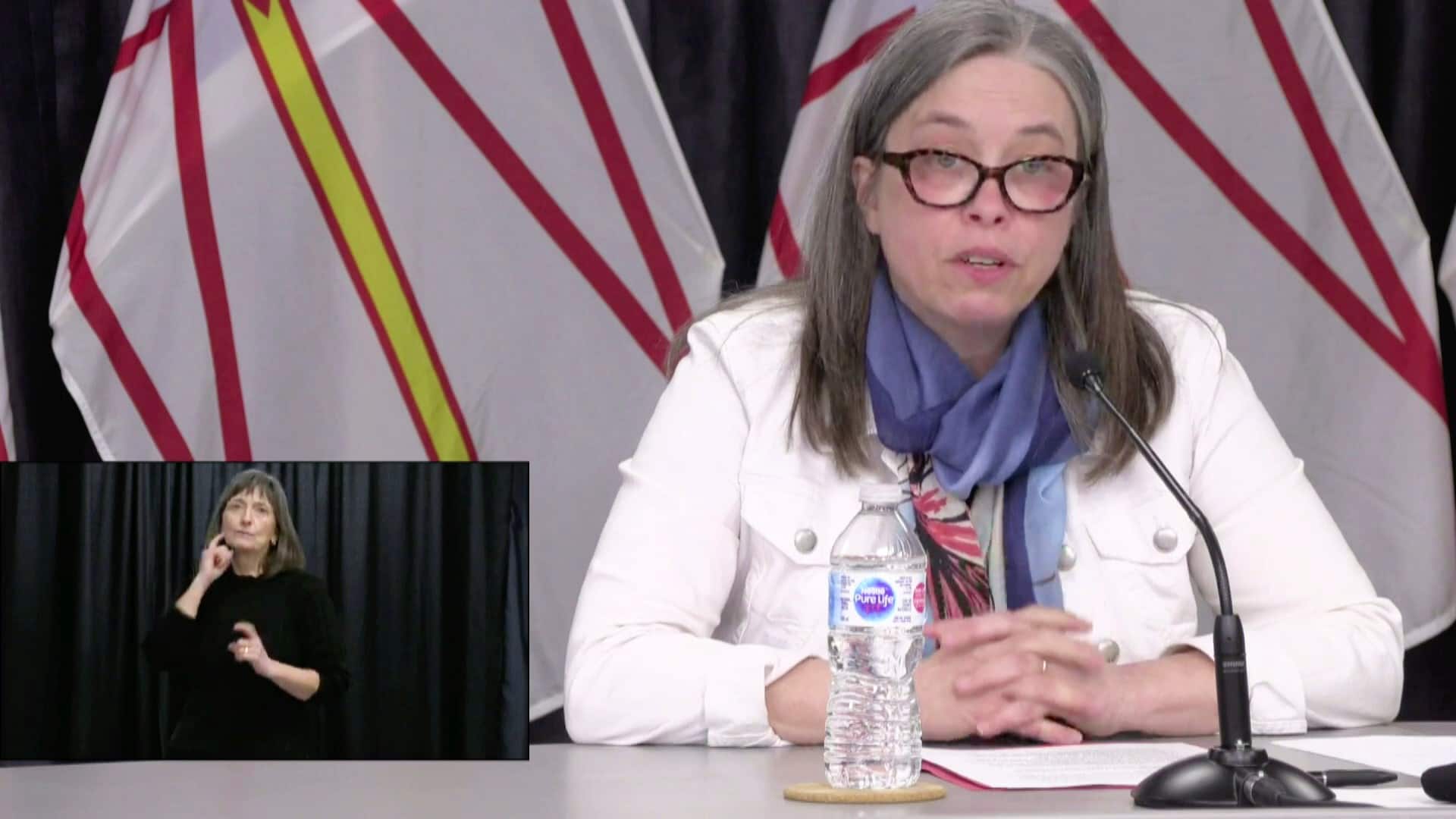 Dr. Janice FItzgerald says she hopes new long-term care rules will not have to last long 7:05

All but three of the 50 new cases are in the Eastern Health region, with the remaining cases under Central Health’s jurisdiction.

Nobody is in hospital due to the virus as of Friday.

Twenty of those cases are children or teenagers.

“There are significant and growing numbers of families and businesses that have been potentially exposed to COVID,” Fitzgerald said, repeating that those in the St. John’s area shouldn’t travel to other parts of the province, except for emergencies, such as caring for a family member.

She estimates thousands in the metro area are in isolation.

Most of the cases announced this week have been under the age of 20.

Earlier Friday, Dr. Theresa Tam, Canada’s chief public health officer, spoke on the outbreak in metro St. John’s, and underscored what Fitzgerald has said: That the large number of infected young people could pose a risk to others.

“If you had a younger person whose family members work in health care, and that health-care worker goes into a [long-term-care] facility or hospital or high-risk setting, spread can occur in those settings where severe outcomes can occur,” Tam said.

Watch the Government of Newfoundland and Labrador stream here:

While long-term care residents are high on the priority list for vaccinations, most have only received the first of two doses, Haggie said.

Fitzgerald further restricted visitation rules for long-term care homes in the metro St. John’s region. As of Friday, only those visitors “who are deemed essential for the health and care of the residents” may enter retirement homes.

“I hope these measures will be short-lived to minimize the negative consequences,” she said.

Meanwhile, the province has suspended drivers’ exams out of its Mount Pearl location for two weeks and largely closed both its metro-area provincial and Supreme Court buildings to the public.

All Supreme Court matters for next week will be rescheduled, with provincial court only attending to in-custody hearings for the next four weeks, and conducting as much of its business virtually as possible.

Testing has sped up dramatically this week, with 1,667 people tested for the virus on Thursday, a two-fold increase from Wednesday. Some 1,560 people have been tested in the past 24 hours, Fitzgerald said.

Negative results can be found online, she said, while public health will call to notify of positive results.

Haggie said 811 staffing will increase by 90 per cent by next week to handle the influx of calls for tests.

However, staffing at a number of public bodies has been affected due to isolation orders, including at election polls and within municipalities. An estimated 300 health-care workers are in quarantine, with 233 of those in Eastern Health.

The outbreak’s spiralling is occurring simultaneously with political tumult. On Thursday, in-person voting in 18 districts on the Avalon Peninsula was postponed as Elections NL staff dropped out, citing COVID-19 concerns or complications. The chief electoral officer defended that move Friday amid questions about its legality.

Despite the curtailed workforce, Fitzgerald extended thanks to test centre and contact tracing staffers.

“There is a huge team of people behind me. There is no way I could get up every day and do what I do without them,” she said. “What Eastern Health has been able to do in the past week is nothing short of phenomenal.”

Fitzgerald says public health is expecting more cases in the coming days, due in part to sporting events, including the NFL Superbowl, last weekend, since it often takes symptoms a week to develop.

“We really can’t read anything into these numbers right now,” she said. “We have widespread community transmission, which has not changed since yesterday.”

A briefing is expected for Saturday.