Myanmar’s army is hunting for seven well-known supporters of protests against this month’s coup, and they face charges over comments on social media that threaten national stability, the army said on Saturday.

Among those named was Min Ko Naing, a one-time leader of bloodily suppressed protests in 1988, who has made calls supporting the street demonstrations and a civil disobedience campaign.

All seven are opponents of the Feb. 1 coup in which the military took over and elected leader Aung San Suu Kyi was detained. The majority are also supporters of her National League for Democracy party.

The announcement came on the eighth day of protests across the Southeast Asian country against the coup, which halted an unsteady transition to democracy that began in 2011 and roused fears of a return to an earlier era of repression.

WATCH | Thousands take to the streets to protest Myanmar’s coup: 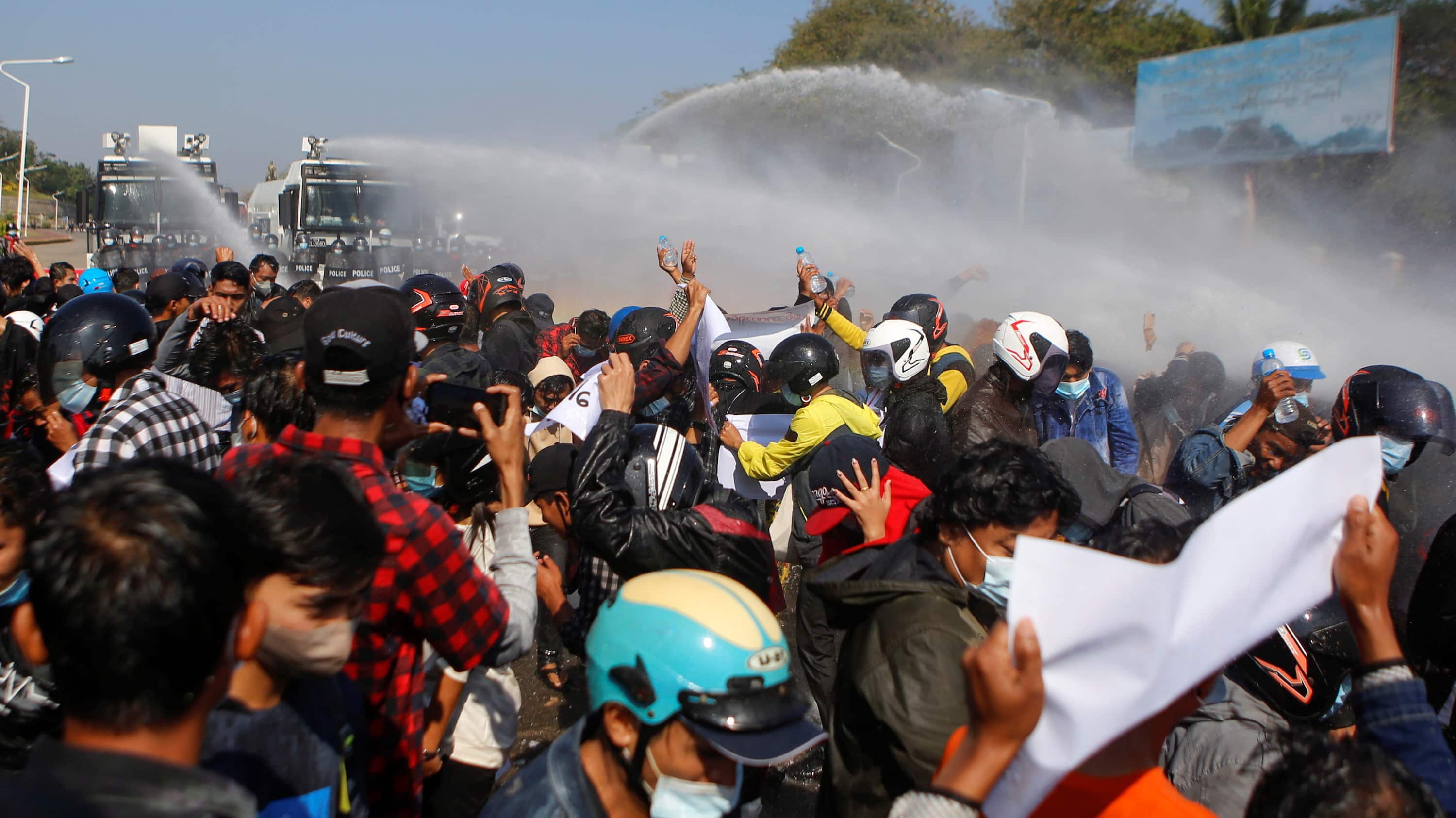 Myanmar police fired water cannons into pro-democracy crowds in at least three different cities as protests continue against the military’s seizure of power on Feb. 1. 0:46

People should inform the police if they spot any of the seven people named and will be punished if they shelter them, the army’s True News information team said in a statement on its Facebook page on Saturday.

It said cases had been filed under Section 505 (b) of the penal code, which was often used by previous juntas and imposes a sentence of up to two years for comments that could cause alarm or “threaten tranquility.”

“I am so proud to have a warrant issued along with Min Ko Naing. Catch me if you can,” said one of those named, NLD lobbyist Ei Pencilo, on her Facebook page, which has over 1.6 million followers.

The United Nations human rights office said on Friday more than 350 people have been arrested in Myanmar since the coup.

Journalist Shwe Yee Win, who had reported on opposition to the coup in the western town of Pathein, was taken away by police and soldiers on Thursday and has not been heard from since, her TimeAyeyar news website and her mother said.

“I am really worried,” said Thein Thein, now looking after her daughter’s one-year-old child. “Her son is in trouble now since she was breastfeeding him. She didn’t even get chance to put on her shoes before they took her.”

The government did not respond to requests for comment.

Families left in the dark

Anger in Myanmar has been fuelled by videos showing more arrests of government critics, including a doctor who was part of the civil disobedience movement. Some arrests have taken place during the hours of darkness.

“Family members are left with no knowledge of the charges, location, or condition of their loved ones. These are not isolated incidents, and nighttime raids are targeting dissenting voices,” it said in a statement.

The army said it had seized power because of alleged fraud in a November election that Suu Kyi’s NLD won in a landslide. The electoral commission had dismissed the army’s complaints.

Suu Kyi, for decades the standard bearer of the fight for democracy in Myanmar, faces charges of illegally importing and using six walkie-talkie radios.

NLD press officer Kyi Toe said on Facebook that she was healthy under house arrest in the capital Naypyitaw.

The 47-member UN Human Rights Council adopted a resolution on Friday calling on Myanmar to release Suu Kyi and other detainees and to refrain from using violence on protesters. 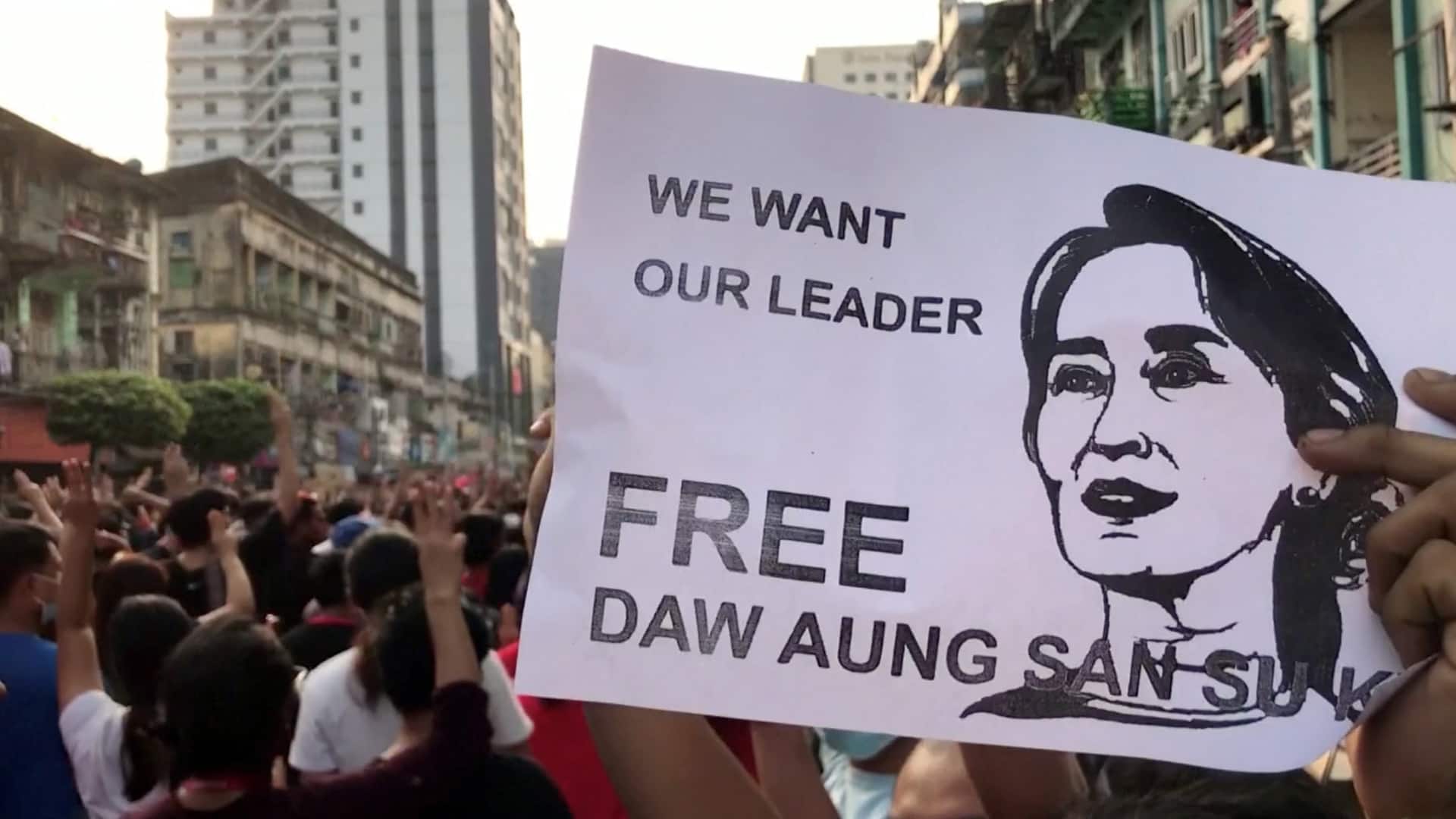 Protesters chanted for the release of detained leader Aung San Suu Kyi on Saturday as Myanmar’s military sought to quash the unrest by blocking internet access. 1:11

The United States this week began imposing sanctions on the ruling generals and some businesses linked to them.

Airline staff, health workers, engineers and school teachers were among groups that joined the protest marches on Saturday and that have rallied to a civil disobedience campaign that has shut down a swath of government business.