“If you’d asked me a couple years ago, I would not have in my wildest dreams imagined that this was the situation we’d find ourselves in,” Brig.-Gen. William Fletcher said in an interview from Edmonton.

Brig.-Gen. Fletcher, who is in charge of all army troops from Thunder Bay to Vancouver Island and domestic operations on the Prairies, said military pandemic response plans made prior to the arrival of COVID-19 in Canada have put the Armed Forces in good shape.

“We’ve got a saying in the military that a plan never survives contact with the enemy, but it’s a good baseline” to start from, he says.

The military is currently deployed in at least six remote Indigenous communities in Ontario, Manitoba, Saskatchewan and Alberta.

Brig.-Gen. Fletcher said the military is working with provinces to figure out where troops might be needed next, but couldn’t say how many more communities are expected to receive support on the ground.

“If nothing else, we will be very busy monitoring the situation.”

He said troops have been given different tiers of pandemic training depending on their duties.

Indigenous awareness training is also provided and tailored to cultural realities, but not every solider will necessarily have that before going to a First Nation.

Indigenous soldiers have been instrumental in preparing their colleagues to go to reserves, he added.

“They are tremendous even for informally being able to provide some realities to folks who’ve not experienced interactions with a First Nations community.”

In recent days, 55 Armed Forces members on the Shamattawa First Nation in northern Manitoba have built a temporary wall in the community’s school to separate COVID-positive patients by gender.

They’ve also gone door to door in the community, which has seen a severe COVID-19 outbreak, to test residents for the coronavirus that causes the illness and do wellness checks.

“I’ve never seen military up close, so [it’s] exciting at the same time,” said Rusty Redhead, a Shamattawa resident who got tested for COVID-19 in recent days by a military medic, accompanied by soldiers.

Redhead is still waiting for the result of his test.

Military personnel are expected to be in the fly-in community, located 745 kilometres northeast of Winnipeg, until the situation stabilizes.

In Shamattawa, they’re staying in classrooms in the community’s school, but Brig.-Gen. Fletcher said digs may not be so comfy for personnel in other communities. 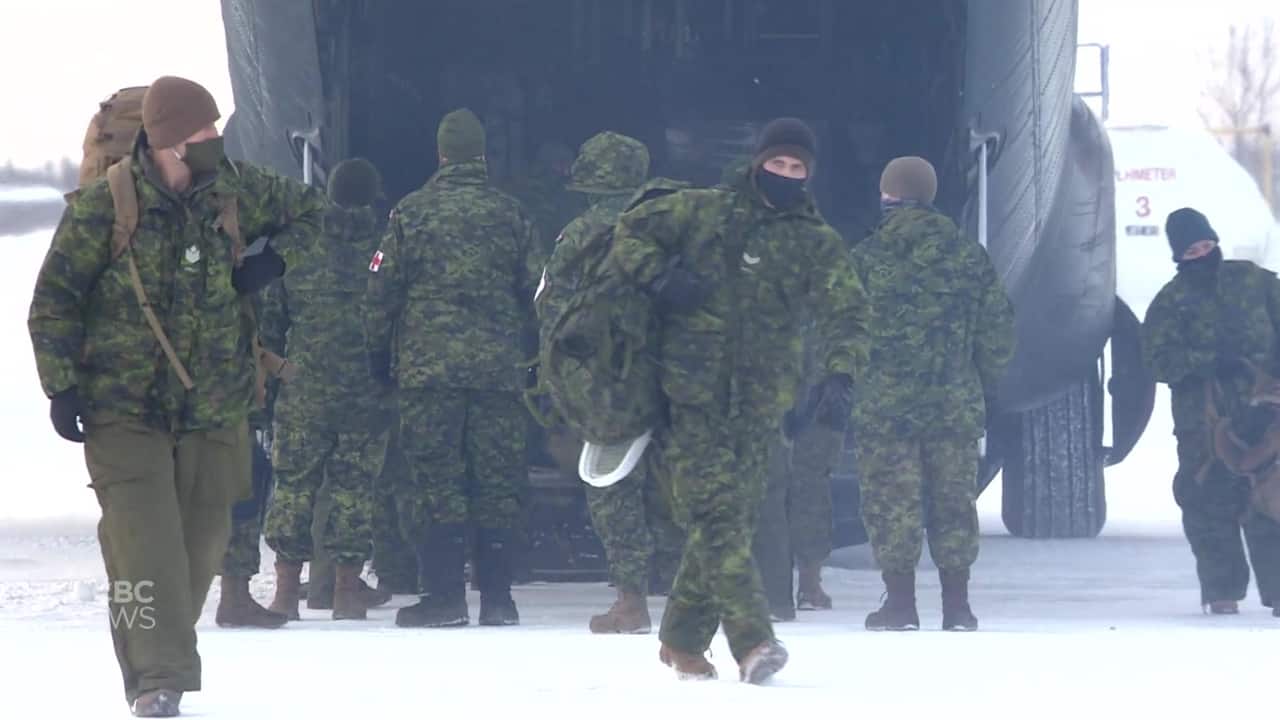 Military troops are preparing to spend Christmas away from their families, helping remote communities fight COVID-19. The CBC’s Austin Grabish has this inside look at the Canadian mission. 2:11

“We are absolutely prepared to go and live in tents, be completely austere, because what we don’t want to do is become a burden on the local economy or local infrastructure.”

While the soldiers are prepared to live in tents if needed, Brig.-Gen. Fletcher said he doesn’t expect the military to set up field hospitals in isolated communities this winter.

“I think if we did it would be very much an extremely dire situation, where we exhausted all other resources at the federal and provincial levels,” he said.

Shamattawa Chief Eric Redhead, who first asked for military support at the end of November, said the help from the Armed Forces is about more than handling the rapid spread of COVID-19.

“I think it’s a big step forward in terms of reconciliation between Canada and the First Nations people, so I’m really, really proud of that.”