Mikaela Shiffrin is a two-time Olympic gold medallist and the most dominant ski racer on the planet. But prior to today, the American star hadn’t won a race since Jan. 26, when she captured a super-G in Bulgaria for her second World Cup win in three days and sixth of the season. At the time, everything pointed to Shiffrin, who was only 24 years old, capturing her fourth consecutive overall title and continuing her march toward breaking Lindsey Vonn’s record for all-time women’s alpine World Cup wins — maybe as soon as this season.

But Shiffrin’s world turned upside down a week later when her father died at the age of 65 after an accident at home in Colorado. Jeff Shiffrin taught his daughter how to ski, and the two remained close even after Mikaela’s career took her to Europe for much of the winter every year. Jeff and his wife, Eileen, would often travel overseas to watch their daughter compete. “My family is heartbroken beyond comprehension about the unexpected passing of my kindhearted, loving, caring, patient, wonderful father,” read a statement on Mikael’s social media accounts after Jeff’s death.

Devastated by the sudden loss of her dad, Mikaela took several weeks off the World Cup circuit and saw her lead in the standings evaporate. She planned to return in March, but the pandemic caused the cancellation of the rest of the season. She wound up second in the overall chase and, for only the second time in the last eight years, didn’t win the overall title in the slalom — the event she has basically owned since the 2012-13 season.

Shiffrin finally made her return in late November — for the second World Cup stop of the season, in Finland. But she admitted to still being gripped by often-overwhelming feelings of anger and grief, and her results reflected that. She placed second and fifth in her first two slaloms and fourth in Saturday’s giant slalom in France. That’s a strong start for most skiers. Just not for Shiffrin.

But today, in another GS on the same hill in France, Shiffrin raced to her first victory of the season — and first since her dad’s death 323 days ago. Now, only two alpine skiers in history have won more World Cup races than Shiffrin. Her 67 wins put her only 15 behind Vonn for the all-time women’s record of 82 and 19 behind Ingemar Stenmark’s all-gender record of 86. Shiffrin is still only 25 years old.

But this one went beyond the record books, and everyone there knew it. One of the first people to congratulate Shiffrin was Federica Brignone, the Italian skier who overtook her for the overall title last season and finished second in today’s race. Frenchwoman Tessa Worley, who was third today, said she “just wanted to hug” Shiffrin and was “so proud and happy for her. I can’t even imagine what she has been through.”

More importantly, Shiffrin’s mom was there to give her a hug. “I definitely didn’t ski alone today,” Shiffrin said. “I had a lot of strength from a lot of people. It’s a bit bittersweet.”

That’s refreshing to hear. Great athletes are often portrayed as islands unto themselves — emotional rocks who perform their best no matter what’s happening in their lives. How many times have you heard a star praised for their ability to “compartmentalize?” But for most of us (and probably many of them too), it doesn’t really work that way. We lose someone and it takes weeks, months, maybe years (maybe never) to feel normal. It takes time. And a lot of help.

Shiffrin continues to be uncommonly honest about her struggles. So we know that today’s win isn’t some tidy ending, like in a sports movie. It doesn’t “complete her comeback” or “give her closure” or something like that. It’s a step on the path to maybe feeling alright one day. And her willingness to let us know that is actually the most inspiring thing about it. 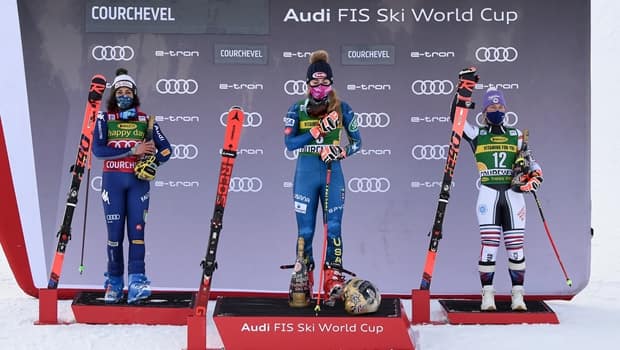 Mikaela Shiffrin captured her first FIS World Cup win of the season as she crossed the line with a 2-run time of 2:18.63 at the Giant Slalom race in Courchevel, France Monday 2:13

Cleveland’s Major League Baseball team is changing its name. After 105 years of calling themselves the Indians, the franchise announced today that it will “begin the process” of choosing a “new, non-Native American based name.” Owner Paul Dolan told The Associated Press that the team will still go by its current name in 2021. It’s considered offensive by some, and last year the team stopped using its Chief Wahoo logo. Last summer, a wave of demands for sports teams to drop their Indigenous names and/or imagery emerged, coinciding with the protest movement against racial injustice that began after the killing of George Floyd. In July, the NFL team in Washington and the CFL team in Edmonton dropped their names. Some have called for Chicago’s NHL team, Kansas City’s NFL team and baseball’s Atlanta team to do the same. Read more about the Cleveland baseball name change here.

A Lim Kim won the final golf major of the year. The South Korean birdied the final three holes to rally for a one-shot victory at the U.S. Women’s Open. Kim started the final round five shots back in chilly Houston, where rain pushed the conclusion of the tournament back to today, and shot four-under to finish at three-under for the event. Canada’s Brooke Henderson finished tied for 44th at 10-over. The only other Canadian in the field, Alena Sharp, didn’t make the cut. Read more about it here.

And in case you missed it…

A few things from the weekend you should know about:

Sarah Fuller made college football history again. Two weeks after becoming the first woman to play for a Power Five conference team when she booted a kickoff for Vanderbilt, Fuller became the first woman to score, making both of her extra-point tries vs. Tennessee on Saturday. Read more about Fuller’s day and watch her kicks here.

A college basketball star collapsed on the court. Keyontae Johnson, a junior forward who led the Florida Gators in scoring with 19.7 points per game heading into Saturday’s contest at Florida State, collapsed as his team came out of a timeout early in the first half. Johnson had just dunked on an alley-oop play right before the timeout. With several of his teammates in tears after he went down, he was taken to hospital and remained in critical but stable condition yesterday. Read more about this scary moment here.

The Columbus Crew won the MLS Cup. Major League Soccer Newcomer of the Year Award winner Lucas Zelarayan scored twice and Columbus overcame the absence of two midfielders who tested positive for the coronavirus to beat the defending-champion Seattle Sounders 3-0 on Saturday night. This is Columbus’ first title since 2008, and it came against a Seattle team that was playing in the championship match for the fourth time in five years (the Sounders fell to 2-2). Read more about the final and watch highlights here.