On a calm day off the shores of Folkestone, a port town in southeast England, the waves slowly lap against the pebble shore. But there is a false sense of peace because of the danger a drastically growing number of migrants are putting themselves in to get here.

More than 8,000 people have arrived on Britain’s shores this year, crossing the English Channel by boat from northern France — four times the number in 2019.

“I think the busiest day, 400 made the crossing,” said Tony Smith, a former head of the U.K. Border Force, which carries out immigration and customs controls.

A large number of the people arriving have travelled from conflict zones such as Syria, Iraq and Yemen. Some travel via Libya to Italy and then on to such countries as France or Germany, while others travel through Turkey to Greece and then on to France.

For some, once they arrive in northern France, the final leg of their journey involves crossing the water that separates it from the United Kingdom.

In previous years, the crossing was often made hiding in the back of trucks that were loaded onto ferries or in shipping containers, but Smith said that method is becoming difficult.

“We’ve introduced a lot more security in the ports. It’s much harder now for illegal or irregular migrants to get on board vessels,” he said, which is why they are using dinghies and kayaks organized by smugglers in France.

The crossing by boat has been deadly this year. In late October, a Kurdish family of five, fleeing Iran, lost their lives when the boat they were in capsized two kilometres off the coast of France. In all, about 10 people died last year making the crossing.

Earlier this year, the government even suggested stopping boats mid-crossing and returning them to France to limit the number of people making it to the U.K.

Reaching Britain is a goal for a number of different reasons, including reuniting with family already there and the belief that the U.K. will offer them a better future. As well, it’s not uncommon for migrants to have at least a basic grasp of the English language. 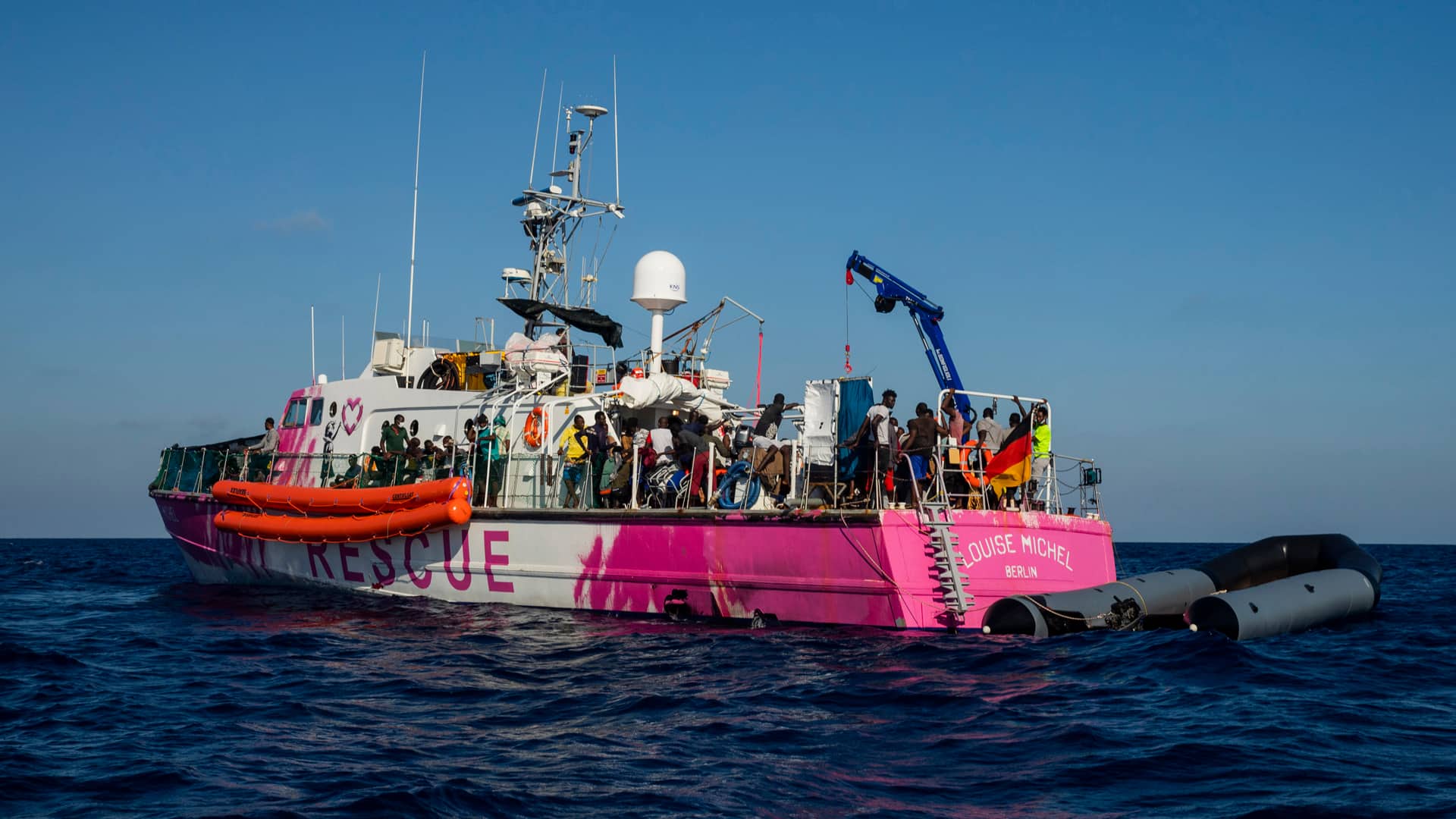 Two agencies of the United Nations called for the “urgent disembarkation” of the Louise Michel, a rescue boat funded by British street artist Banksy, and two other ships carrying a total of more than 400 migrants in the Mediterranean. 3:30

The increased numbers have created issues for housing while the migrants wait for their asylum claims to be processed.

Some are now being housed in former military barracks, including the Napier Barracks in Folkestone, a town of about 46,000 people. The barracks were home to Canadian troops during the First World War, where soldiers were staged before heading off to fight on the Western Front.

Chapman said the situation for the migrants is made worse by tough talk from the government about cracking down on illegal migration. Instead, she would like to focus on providing safe ways for people to claim asylum.

“It adds to the hostile environment and a very unpleasant atmosphere for people, and I think it’s shameful, frankly,” Chapman said, pointing out that protesters regularly harass migrants in the community by videotaping their every move.

To counter that reception, hundreds of people showed up outside the barracks on a Saturday afternoon in October to give the migrants a warm welcome.

With the song We Are Family blaring, supporters waved and cheered at the men through the fence. A group gathered in the compound waved back.

Folkestone resident Liberty Carre made a cardboard sign that read “Welcome” in Kurdish.

“I feel it’s important to welcome people coming to this country, to make them feel safe,” Carre said.

That’s what Peter Carroll says his community has been doing for generations, and he doesn’t see why this current situation is any different.

“Folkestone is an area that is usually supportive of people who have come here in the past,” he said. “Before the First World War, we welcomed 40 to 50 thousand Belgians. It has a long history of supporting refugees.”

But not long after the friendly crowd left, a smaller group of protesters arrived outside the barracks.

One man wearing a red “Make Britain Great Again” hat shouted “go home” at the men, while a woman in the crowd yelled to the media, “These barracks should be housing our homeless veterans, not illegal immigrants.”

When asked for comment, no one in the group would speak directly with CBC News.

In town, that sentiment was echoed by some, though drastically toned down.

“I just feel like we should look after our own first,” said pub owner Steve Barrett. It is a topic that comes up often with customers over a pint, he said, noting that while people feel sorry for the migrants, communities are struggling with COVID-19.

“I think they should be looked after — everyone deserves a home and somewhere to live — but the country is in a bit of a state at the moment.”

“We really need to have an open discussion and acknowledge people’s concerns from both sides,” refugee Ahmad al-Rashid said when asked about the tension over migrants in Folkestone.

He left his wife and children in Syria when he came to Britain in 2015. He said the journey was difficult, and he relied on smugglers to get passage on boats and space to hide in the back of trucks.

At multiple points, al-Rashid said, he feared for his life and was duped by smugglers, but staying in war-torn Syria wasn’t an option for him.

Al-Rashid, whose wife and daughters have now joined him in England, said part of the reason he chose the U.K. was because family reunification happens quickly once refugee status is granted.

“I wanted a place for my children to grow up where I don’t have to worry about them being bombed or shelled or killed or kidnapped — or raped,” he said, referring to his young daughters.