Manuel Feller raced through driving snow to win a World Cup slalom on Saturday in Flachau, Austria after Clement Noel let a first-run lead slip away for the second straight race.

Feller rose from third fastest in the morning to edge Noel by 0.43 seconds in a two-run time of one minute 50.27 seconds and regain the slalom standings lead on a course named for Austrian great Hermann Maier.

Marco Schwarz was third in 1:50.97, trailing his Austria teammate by 0.70, and a single point in the season-long standings.

Erik Read was the lone Canadian in the second run and was 27th of 27 finishers in a time of 1:54.49. However, the Calgarian did earn points for a 10th time this season. 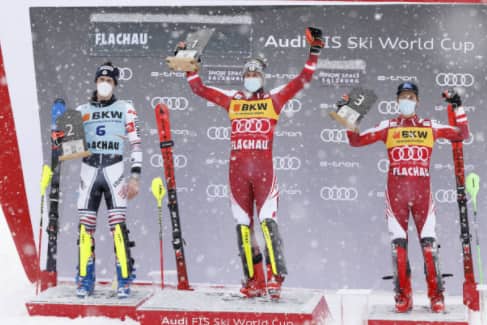 Manuel Feller of Austria crossed the line with a two-run time of 1:50.27 claiming his first career World Cup win at the Flachau, Austria slalom course Saturday 2:44

Feller’s first career win followed six runner-up finishes, including in two slaloms this season and a silver medal at the 2017 world championships.

Noel was a three-time winner last season but got his first podium finish Saturday in his fifth race of this campaign. The Frenchman also wasted a first-run lead last Sunday when Schwarz won at Adelboden, Switzerland.

World Cup overall standings leader Alexis Pinturault placed ninth, rising from 20th fastest in the morning run. He extended his points lead over Aleksander Aamodt Kilde, the defending overall champion, and Marco Odermatt, who do not compete in slalom.

Flachau stepped in to host its first men’s slalom for nine years after two schedule changes this week.

Switzerland’s signature venue Wengen was ruled out on Monday from hosting its storied Lauberhorn meeting this weekend after an outbreak of COVID-19 cases likely caused by British tourists.

Kitzbuhel, which stages its classic Hahnenkamm downhill next Saturday, was then slated to host its own slalom and Wengen’s this weekend. They were then switched to Flachau to give more time for virus tests in Kitzbuhel.

Flachau hosted its traditional women’s night slalom on Tuesday, won by Mikaela Shiffrin, and is a flatter slope than most on the men’s circuit.