Restrictions like the sweeping new set of pandemic control measures that took effect in Manitoba on Friday are a step in the right direction, says Canada’s chief public health officer, but it will take some time before it’s clear how effective they’ve been.

Dr. Theresa Tam said on Friday she’s optimistic that rules like Manitoba’s recent ban on almost all gatherings between households will help slow the spread of COVID-19.

“We’ve seen some increase in measures, and I mention Manitoba just because they did just put in some amazing more-restricted measures,” Tam said at a news conference.

“Of course, that takes a little bit of time for us to see whether it has an impact.

“And I expect that it will, because if you looked at European countries, we know how this virus is spread: through interactions. Once you start limiting them, I expect we will see some of those curves beginning to bend.”

The province’s newest rules also include only allowing stores to sell items deemed essential to those shopping in person, though non-essential items are still available for delivery or curbside pickup.

The latest restrictions came as Manitoba’s top doctor repeated his plea for people to change their behaviour.

“We really need to make that dramatic change, back like in the spring, to just reduce our contacts.” 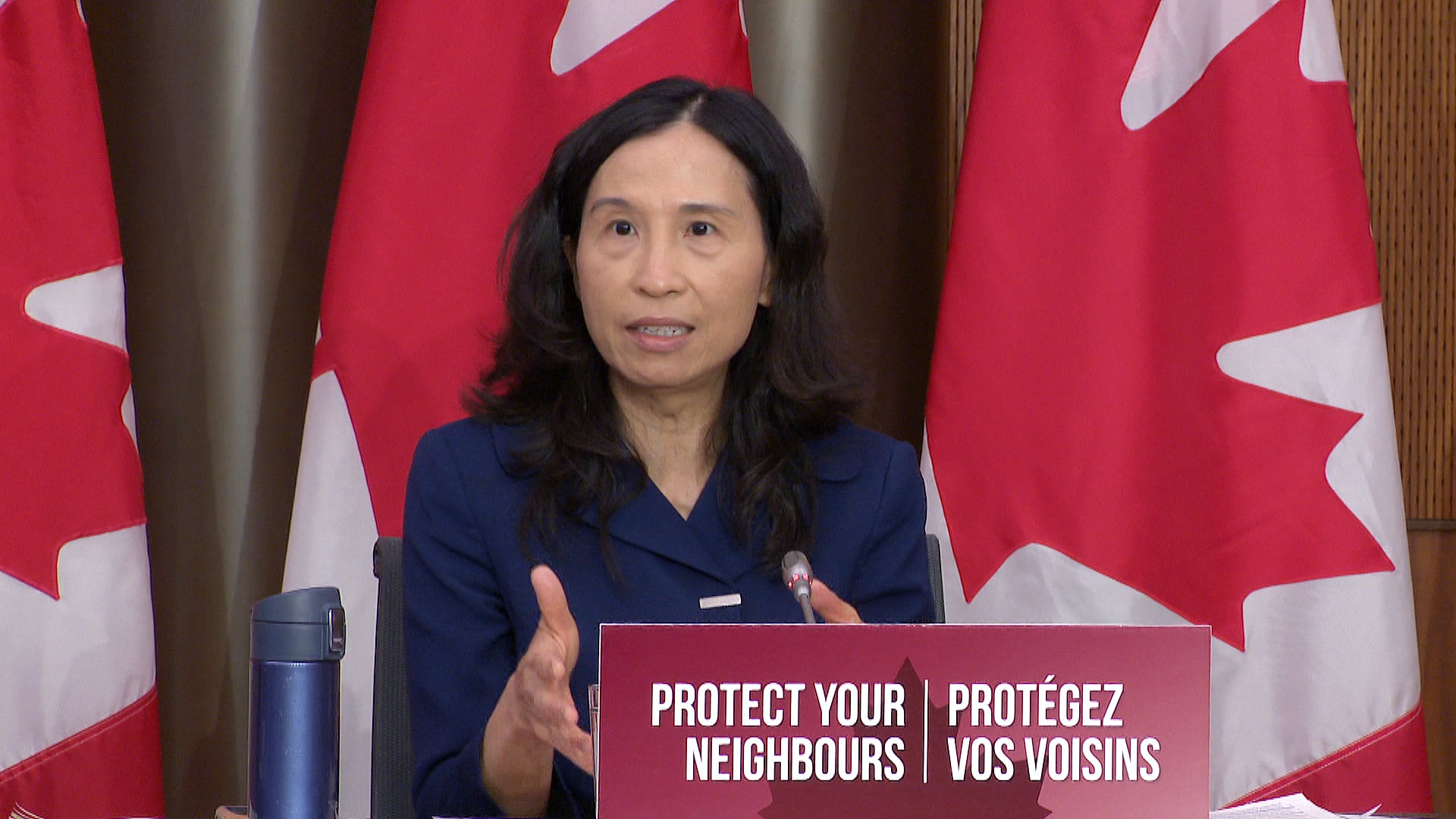 Dr. Theresa Tam, Canada’s chief public health officer, says it will take some time before limits on social gatherings have an effect, but she’s optimistic. 1:19

Roussin said he was surprised that not everyone in Manitoba is following public health advice and orders as closely as they did earlier this year, when the province brought in its first widespread shutdown measures.

“Probably the majority of Manitobans have been on board right from the beginning,” he said.

“But when we have our front-line health-care providers … crying out for help, saying that their hospitals are full or ICUs are getting full, and then we see big box stores packed on the weekend after we went to critical red, it was quite alarming.”

Manitoba continues to have the highest per capita rate of COVID-19 cases in Canada, with another 438 announced on Friday. Nine more COVID-19 deaths were also announced, bringing the province’s total since the start of the pandemic to 207.

Tam’s news conference came after the Public Health Agency of Canada released updated epidemiology and modelling on Friday, which showed the number of new COVID-19 cases and hospitalizations shooting up more sharply in Manitoba than in other provinces.

That national modelling suggests Canada could see 60,000 daily new COVID-19 cases by the end of the year if people increase their contacts with others. It also says that number could be limited to 20,000 a day if Canadians keep the same number of personal contacts they have now.

Roussin said one of the effects public health officials hope to see as a result of the new rules is a lower five-day test-positivity rate. That was 13.7 per cent in Manitoba on Friday — down slightly from a record high of 14.2 per cent rate on Wednesday.

“We don’t have much choice but to have widespread, sweeping restrictions that are just going to decrease everyone’s contacts.”

Roussin said the rules introduced in Manitoba this week need to stay in place until there are clear indications they’re working — a sentiment echoed by Tam.

“We have seen some jurisdictions having put on some brakes,” she said.

“But we can’t release the brakes rapidly, unless we’re absolutely certain that other measures have been put in place to control or limit the spread.”