The 2022 Winter Olympics open exactly one year from this Thursday. If the last two weeks are an indication, Canada’s long-track speed skaters are going to be a force in Beijing.

Despite having very little opportunity to train on a proper oval since the pandemic hit, the Canadian team piled up 11 medals in the two meets that made up the shortened 2021 World Cup season. Two weekends ago, they won five medals — including gold in the women’s team pursuit. This past weekend, they added six more — including another victory by the women’s team pursuit trio of Ivanie Blondin, Isabelle Wiedemann and Valerie Maltais. Laurent Dubreuil captured a silver and two bronze this weekend in individual men’s races, Blondin added a silver in the women’s mass start, and Canada also took silver in the men’s team pursuit.

Up next is the final event of the year: the world championships. They’ll be held Feb. 11-14 at the same oval in the Netherlands that hosted the two World Cups.

Read about how the Canadian team is building on the country’s rich tradition of speed skating success in this story by CBC Sports’ Devin Heroux. And read Devin’s story on how speed skater/cyclist Vincent De Haître plans to compete for Canada at two Olympics in the same year here. 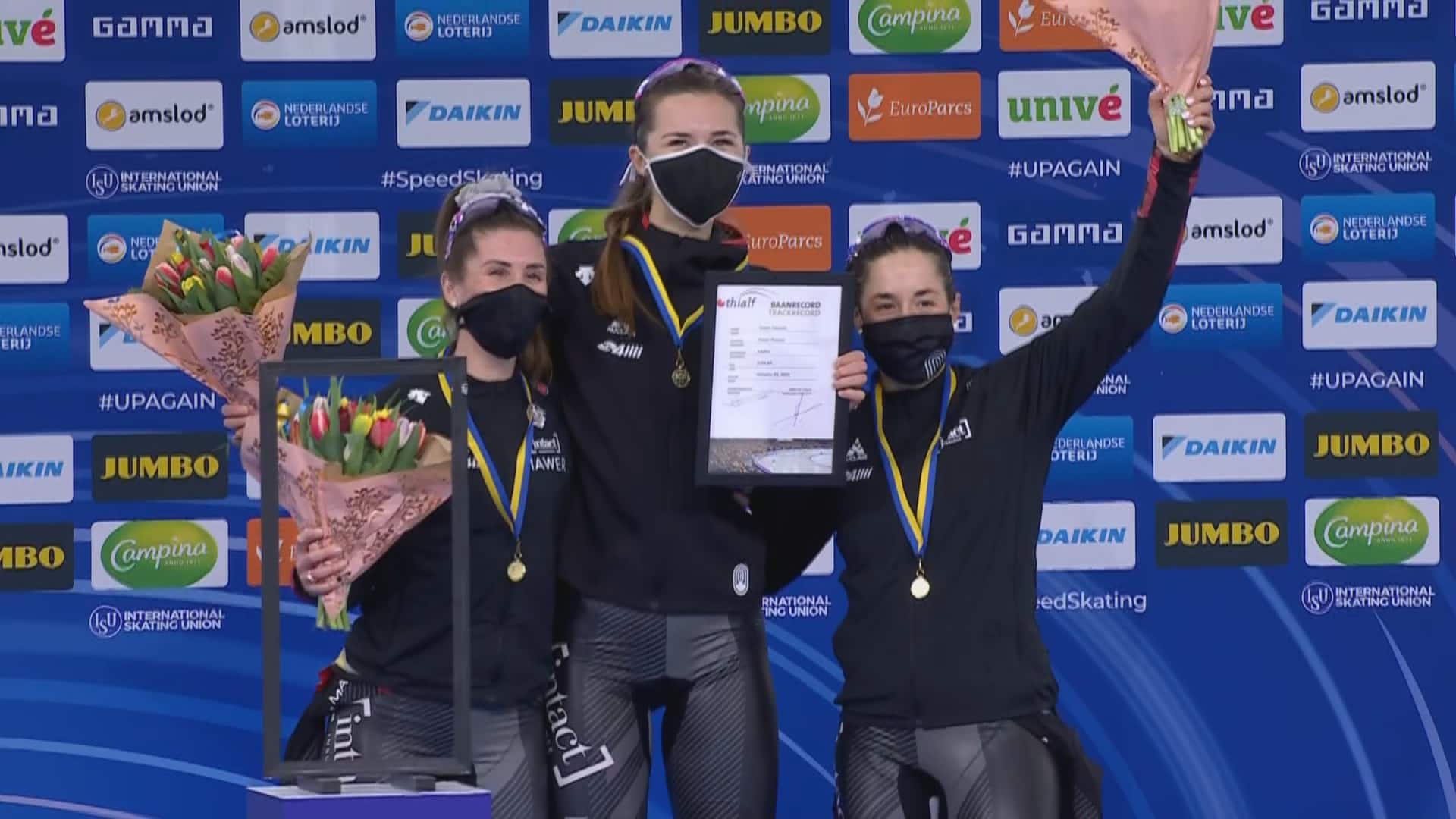 More Canadian winter-sports athletes won medals over the weekend. It wasn’t just the speed skaters. Justin Kripps piloted his four-man bobsleigh to a bronze medal that secured a third-place finish in the season standings. Melissa Lotholz won a bronze in women’s monobob, which will make its Olympic debut in 2022. Alpine skier Marie-Michèle Gagnon ended her five-year podium drought by taking bronze in a World Cup super-G race. And the Winter X Games in Aspen ended yesterday with Canadians taking home six medals from the three-day event. Five of those came in freestyle skiing: Megan Oldham hit the podium twice with a silver in the women’s big air and bronze in slopestyle, Cassie Sharpe and Rachael Karker took silver and bronze, respectively, in the women’s superpipe and Evan McEachran grabbed bronze in the men’s slopestyle. Snowboarder Laurie Blouin won bronze in the women’s slopestyle.

The Rangers cut one of the highest-scoring defencemen in the NHL. And no one picked him up. Tony DeAngelo finished fourth among blue-liners last season with 53 points (including 15 goals) in 68 games. New York signed him to a two-year, $9.6-million US extension in October. But the 25-year-old has been benched or scratched multiple times this season as he continues to rub people the wrong way. DeAngelo has done this both on Twitter (he liked some questionable Trump posts before announcing he was quitting the platform for Parler) and in real life. Following Saturday’s loss to Pittsburgh, he reportedly got into an “altercation” with teammate Alexandar Georgiev. After New York waived DeAngelo the next day, coach David Quinn said the move “isn’t about one incident.” Today, all 30 other teams passed on DeAngelo as he cleared waivers. Read more about his departure from the Rangers here.

Two-time Scotties champ Chelsea Carey is back with a Manitoba rink. She skipped Alberta to the title in 2016 and ’19 and has lived in Calgary for the last six years. But Carey was born and raised in Winnipeg and represented Manitoba at her first Scotties in 2014. She’d also been without a team since hers split up, making her a natural fit for Tracy Fleury’s Manitoba-based rink. Fleury decided she can’t skip her wild-card team at this year’s Scotties, which starts Feb. 19 in Calgary, because she needs to stay home with her seven-month-old daughter, who has a rare form of epilepsy that causes seizures. So Carey will replace her. Read more about the switch and Fleury’s difficult decision in this story by CBC Sports curling reporter Devin Heroux.

And in case you missed it…

A few things from the weekend in pro sports that you should know about:

Connor McDavid and Leon Draisaitl combined for 16 points in two games. The fireworks started Saturday night vs. Toronto when McDavid scored two goals — a coast-to-coast beauty and the OT winner — and added an assist while Draisaitl chipped in a pair of helpers. Then the Oilers duo took it to another level in last night’s 8-5 win over Ottawa. McDavid had a goal and four assists and Draisaitl racked up six assists — just one short of the NHL single-game record. That’s shared by Wayne Gretzky, who had seven assists three times, and a guy named Billy Taylor, who did it once, in March 1947 for Detroit. Almost exactly a year later, after getting traded to Boston and then to the Rangers, Taylor was banned for life by the NHL for betting against the Bruins while he played for them. He was reinstated in 1970, but was too old to play again.

A blockbuster NFL trade went down. Two big-name quarterbacks switched teams as Detroit sent Matthew Stafford to the Los Angeles Rams for Jared Goff, a pair of first-round picks and a third-rounder. The Rams did the deal because they see themselves as Super Bowl contenders and consider Stafford a big upgrade over Goff (debatable). The Lions did it because they’re rebuilding under a new coach (again), Stafford wanted out and that’s a lot of draft picks for a 33-year-old QB who’s mostly been a disappointment since Detroit picked him first overall in 2009. Read more about the trade here.

Patrick Reed’s reputation took another hit. The former Masters champion won the Farmers Insurance Open yesterday by five shots. But during his third round he basically awarded himself a free drop for what he claimed was an embedded ball, even though a TV replay showed it bouncing into the rough (which would make it hard for it to embed). Reed picked up his ball without first checking with rules officials, but they allowed him the drop anyway. The incident upset some other players and fans — many of whom don’t appreciate Reed’s prickly personality and haven’t forgotten he was penalized in December 2019 for improving his lie in a bunker. Read more about Reed’s latest brush with the rules police here.