Genie Bouchard lost her third-round match today to Iga Swiatek. The rising Polish teenager was simply on another level, dominating Bouchard 6-3, 6-2 to reach the round of 16 for the second time in three Grand Slams this year. Swiatek has yet to lose a set at this year’s French Open and could be a tough out for top seed Simona Halep in the next round.

Bouchard, who’s ranked 168th in the world, got a wild-card invitation to Paris, where she benefited from a favourable draw. She knocked off the 788th and 108th-ranked players in the world before meeting her first truly tough opponent in the 54th-ranked Swiatek. Bouchard also faced a pretty easy slate during her recent trip to a final in Istanbul. She beat 33rd-ranked Svetlana Kuznetsova, who’s 35 years old, but didn’t have to face anyone else who’s currently higher than 59th.

Still, this is an encouraging run for Bouchard, who climbed as high as No. 5 in the world in 2014 but had fallen all the way to 224th at the end of last year. She reached the third round of a Slam for the first time in three years and is now up to 140th in the “live” rankings.

The only Canadian left in the French Open singles draws is the youngest one: 18-year-old Leylah Annie Fernandez. Her French Open debut is already a success. Ranked 100th in the world (and climbing), Fernandez has beaten 36th-ranked Magda Linette and 47th-ranked Polona Hercog for her second and third career Slam wins.

But she’s stepping up in class now to face No. 7 seed Petra Kvitova. The 30-year-old Czech was ranked second in the world as recently as January 2019, owns a pair of Wimbledon titles and has banked more than $32 million US in prize money in her career. Clay isn’t her best surface, though: she’s made it to the fourth round of the French Open only once in her last six tries. The Kvitova-Fernandez match is Saturday.

Canada also has two players remaining in the doubles draws. Gabriela Dabrowski and her Latvian teammate Jelena Ostapenko reached the women’s third round today, while Vasek Pospisil and American Jack Sock are into the men’s second round.

WATCH | Genie Bouchard swept out of Franch Open in 3rd round: 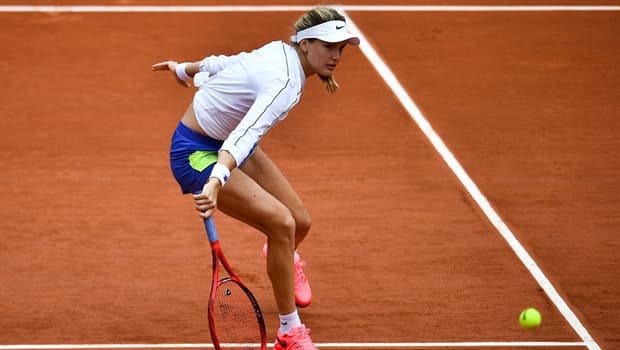 Wild-card entry Eugenie Bouchard of Westmount, Que., fell to 19-year-old Iga Swiatek of Poland 6-3, 6-2 in the third round of the French Open. 2:14

The WNBA Finals tip off tonight. The best-of-five series is a matchup between the top team from the shortened regular season — the Las Vegas Aces — and the second-place squad — the Seattle Storm. Both finished with 18-4 records, but Vegas won their two head-to-head meetings. There’s plenty of star power. The Aces are led by freshly crowned league MVP A’Ja Wilson, while the Storm have 2018 regular-season and Finals MVP Breanna Stewart and 11-time all-star Sue Bird, who turns 40 in a couple of weeks. There are no Canadian players in the series, but Seattle has a guard named Jordin Canada. She averaged 7.9 points this season. Read more about the Finals matchup here.

Kia Nurse is taking a break. Like many WNBA players, the Canadian guard usually heads overseas to keep playing (and making money) during the off-season. Nurse was the MVP of the Australian women’s league a year ago. But this year, she’s decided to take some time off after a trying WNBA season. Nurse hurt her ankle in the first game, then saw her star New York Liberty teammate Sabrina Ionescu lost for the season with her own ankle injury two games later. Forced to carry a weak squad, Nurse shot just 27 per cent and the Liberty finished dead last with a 2-20 record. There was also the frustration of seeing a Kentucky grand jury decline to bring charges against the police who killed Breonna Taylor (WNBA players have centred their protests against police brutality and racial injustice around that case). So instead of Australia, Nurse is working out of her Hamilton, Ont., home as a WNBA and NBA analyst for TSN. Read more about how Nurse is moving on from her toughest season in this piece by CBC Sports’ Myles Dichter.

The second round of the American League playoffs is set. It’s top-seeded Tampa Bay vs. the No. 5 New York Yankees, and No. 2 Oakland vs. No. 6 Houston. Those five-game series will take place in neutral-site bubbles in, respectively, San Diego and Los Angeles’ Dodger Stadium. But first, the National League’s first round needs to wrap up. The top-seeded Dodgers and No. 2 Atlanta are already through. Miami can sweep the Chicago Cubs today, while St. Louis and San Diego play their deciding game tonight. The NL’s second round will be played in Houston and Arlington, Tex.

Doc Rivers wasn’t unemployed long. Just a few days after mutually (if you believe that) parting ways with the Los Angeles Clippers, the big-name head coach was hired by the Philadelphia 76ers. Rivers goes from one underachieving team to another. The Clippers were supposed to be title contenders after landing stars Kawhi Leonard and Paul George last summer, but they lost in the second round to Denver after no-showing Game 7. Rivers took the fall for that. Now he takes over a 76ers team that has failed to get out of the second round despite having two (supposed) superstars in Joel Embiid and Ben Simmons. Read more about Doc’s new gig here.

The Canadian women’s soccer team still doesn’t have a head coach. It’s been without one since Kenneth Heiner-Møller officially left at the end of August. Even though the Olympics are (hopefully) less than 10 months away, the vacancy isn’t as problematic as it may sound. Canada has already qualified, international friendlies are on hold indefinitely because of the pandemic, and most Canadian players are staying sharp with their pro clubs in different parts of the world. So there’s no real rush. But a decision will have to be made soon on who will guide Canada’s quest for a third consecutive Olympic medal. Read about the top candidates in this piece by CBC Sports’ Signa Butler.

As you may have heard, an important person tested positive for COVID-19. We’re talking, of course, about Tennessee Titans rookie cornerback Kristian Fulton. He was a key member of the LSU team that won the college football national championship last season, and he’s helped the Titans to a 3-0 start with a sack and a 44-yard interception return. Tennessee placed Fulton on its reserve/COVID-19 list as it copes with an outbreak that has now resulted in 13 team members testing positive — including seven players. This Sunday’s game against Pittsburgh was postponed, and the NFL announced day that it’ll be played on Oct. 25 instead. There’s also concern that next Sunday’s game vs. Buffalo could be in jeopardy if the virus continues to spread. Read more about the latest on the Titans’ outbreak here.