Kaillie Humphries got some help from a U.S. bobsled legend on her way to making history Saturday.

Humphries is the world women’s bobsled champion for a record fourth time, teaming with Lolo Jones to win the title on a snowy day in Altenberg, Germany. Humphries and Jones finished their four runs over two days in three minutes 48.26 seconds.

And Humphries drove to the title in a sled equipped with runners that were owned by Steven Holcomb, the former world and Olympic champion who died nearly four years ago.

“A big portion of this was for him, too,” Humphries said, talking through her tears moments after winning the title. “This feels great.” 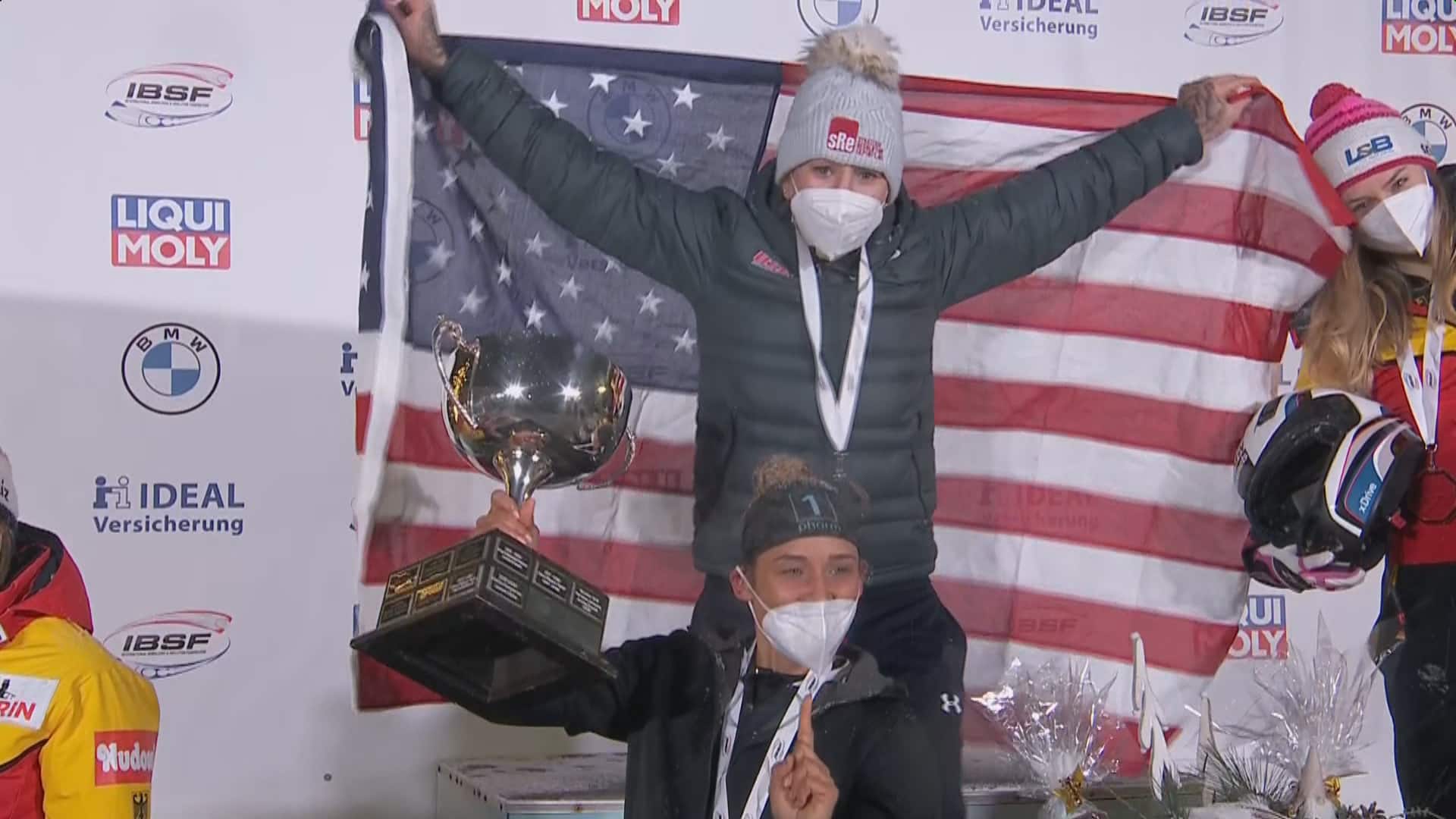 Humphries also won world championships in 2012, 2013 and 2020, along with Olympic gold in 2010 and 2014. The Olympic titles and first two world crowns came while she was racing for Canada. She was released from that national team, began sliding for USA Bobsled in 2019 and is awaiting a citizenship decision that will determine whether she can be part of the U.S. Olympic team next year.

Germany’s Sandra Kiriasis is the only other three-time women’s world champion. And now Humphries stands alone atop that list.

“It is the biggest relief ever,” Humphries said.

Kim Kalicki and Ann-Christin Strack won the silver medal in 3:48.61. Laura Nolte and Deborah Levi of Germany finished third in 3:49.27, followed by the German sled of Stephanie Schneider and Leonie Fiebig in fourth and the U.S. sled of Elana Meyers Taylor and Sylvia Hoffman in fifth. 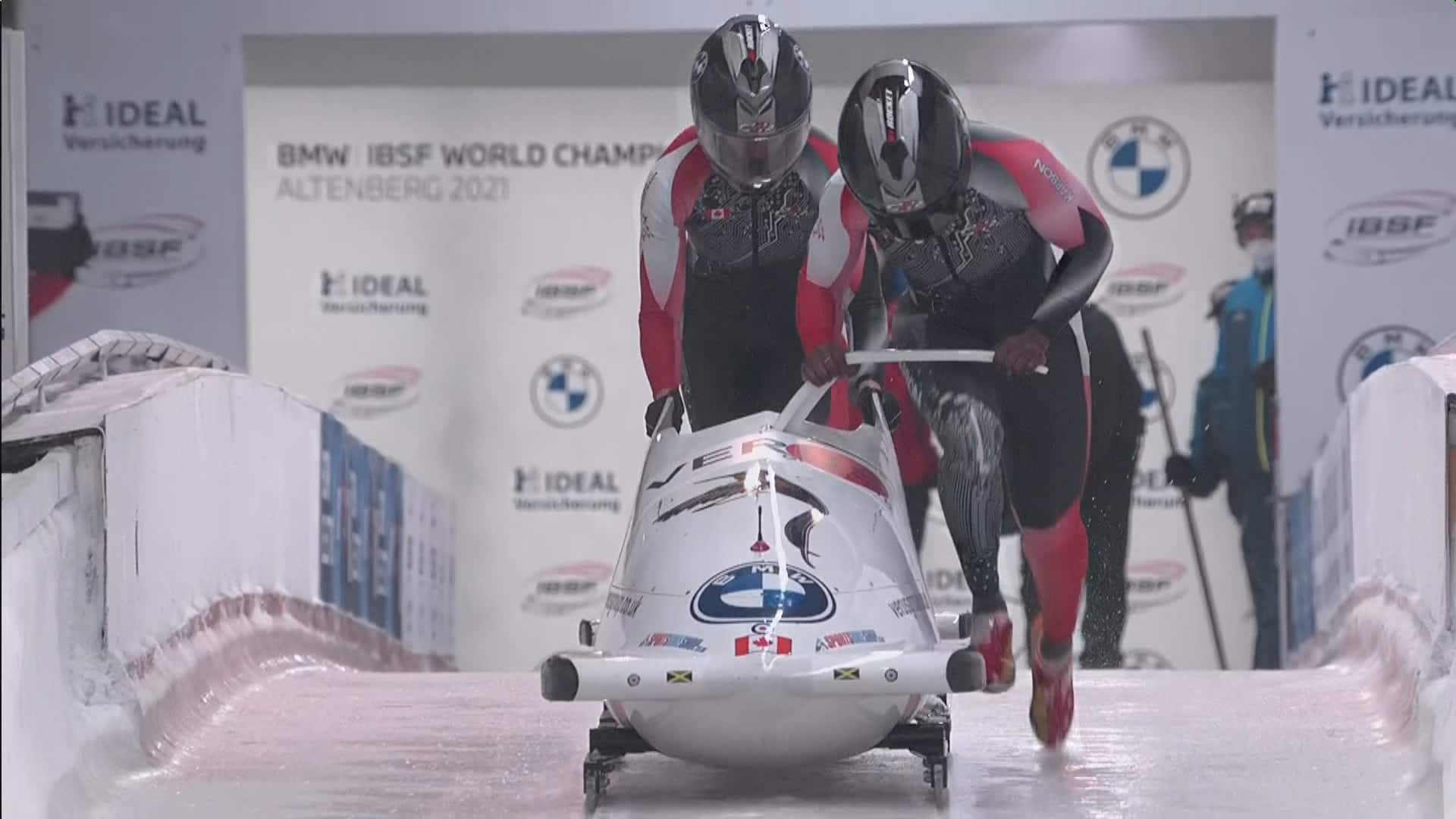 Cynthia Appiah and Erica Voss finished in ninth place Saturday in women’s bobsleigh at the IBSF World Championships claiming the top result for a Canadian sled. 2:33

Jones is now a world champion in two different sports, winning those crowns in three different decades. She’s a two-time indoor women’s hurdles champion, began bobsledding nearly a decade ago and now has by far the biggest victory of her sliding career.

Jones won the world indoor 60-metre hurdles championships in 2008 and 2010. She went to the Olympics as a hurdler in 2008 and 2012 and had a sizable lead in 100-meter hurdles final at the Beijing Games 13 years ago before clipping the next-to-last barrier and stumbling out of medal contention. She also was part of the U.S. bobsled team at the 2014 Pyeongchang Games.

Her focus now is the 2022 Beijing Games, and being part of this world title obviously suggests she can help the U.S. be a serious medal contender there.

“I was the first hurdler to win back-to-back golds indoor so I knew the weight — I had literally been in that those shoes — that she was carrying,” Jones said. “I really just credit Kaillie a lot for just being the vet that she is, holding it all together, staying composed and then just executing. I mean, she deserves this gold medal. She works super hard for it. And she just really killed it.”

Humphries and Jones went into the final heat with a lead of 0.29 seconds over Kalicki and Strack, and the rate of snowfall, which slows sleds down as it begins to coat tracks, was increasing as the final run went along.

Not a problem. Humphries never had any issues in that final run, crossed the finish line, threw her fists into the air then turned around to give Jones a few congratulatory smacks on the helmet.

“To be able to share this moment with her … it just feels really special to know she had faith in me,” Humphries said.

It was the 11th world bobsled title for the U.S.

Holcomb won three of those gold medals, and his presence was still felt this year as well.

“You get that special feeling, like Holcy is still part of this,” U.S. assistant coach Brian Shimer said. “Coming into this and knowing she was running those runners today … pretty special.”

The two-man world championship event started Saturday and Germany’s Francesco Friedrich has already turned it into a runaway. Friedrich and Alexander Schueller had the fastest time in both heats and lead the German sled of Johannes Lochner and Eric Franke by 0.88 seconds — a massive margin in sliding — going into Sunday’s final two runs.

Switzerland’s Michael Vogt and Sandro Michel are third and 0.93 seconds back of Friedrich, who is well on his way to a seventh consecutive world two-man title.

The men’s and women’s skeleton world championships are in Altenberg next weekend, along with the four-man bobsled and women’s monobob events. Humphries will be a favourite for the monobob title.