Jordan Spieth took on a bold tee shot and pulled it off perfectly to set up birdie. He hit a poor 3-wood that went off a tree and back into the fairway that led to another.

Whether it’s good golf or good breaks, it’s making him feel a lot better about his game at the AT&T Pebble Beach Pro-Am. He shot a 5-under 67 at Spyglass Hill on Friday for a one-shot lead over Daniel Berger going into the weekend.

“I like where things are at,” Spieth said, referring to more than his name atop the leaderboard on the weekend for the second straight week.

Winless since his British Open title in 2017 at Royal Birkdale, Spieth wasn’t sure if he was taking baby steps or a giant leap. But one week after relying so much on his wizardry with the wedge and putter, this was a steady diet of keeping the ball inside the tree-lined fairways of Spyglass, reducing stress and making a few putts.

There was a 45-foot birdie putt he holed on the tough par-3 fifth hole. He also missed a few inside 10 feet, and his lone bogey was a three-putt from 7 feet on the par-5 first hole after he made the turn.

WATCH | Spieth takes over lead in Round 2: American Jordan Spieth carded a 5-under 67 to carry a one stroke lead at 12-under par, following the second round of the AT&T Pebble Beach Pro-Am. 0:50

“A little bit improved off last week, which was the goal this week, to just try and feel like I’m getting better each day,” said Spieth, whose tie for fourth in Phoenix was his best result since May 2019. “I haven’t made a ton of longer putts … which is probably a really good sign that I’m keeping the ball in front of me and striking it really nicely.”

Berger shot a 66 at Pebble Beach by going 2-3-2 along the ocean on a day filled will sunshine and a Pacific breeze. He holed 15-foot birdie putts on the par-3 fifth and par-3 seventh holes, and in between chipped in for eagle from about 20 feet on the par-5 sixth.

“I didn’t make a bunch of birdies in the middle of the round and then hung in there and toward the end rattled off a couple and got myself in a good position going into Saturday,” Berger said.

Henrik Norlander had a 70 at Spyglass and was at 10 under, while the group at 9-under 135 included Patrick Cantlay, whose record-tying 62 at Pebble Beach on Thursday was quickly forgotten. His opening tee shot at No. 10 on Spyglass hit a tree and was never found, sending him back to the tee. He opened with a double bogey and eventually got those two shots back until a three-putt bogey on the par-3 third and pars the rest of the way in.

Five-time champion Phil Mickelson won’t be around for the weekend, but he went out in style. Mickelson hit two shots in the ocean on the 18th at Pebble Beach and took a quadruple-bogey 9 for an 80.

Spieth showed his level of trust on the 17th hole, 325 yards with a sharp turn to the left. Instead of laying back with a fairway metal as he often does, he took driver to the front of the green, leaving him a flop shot to 5 feet for birdie. Cantlay in the group behind was too far right, into a bunker about 40 yards short, and made bogey. 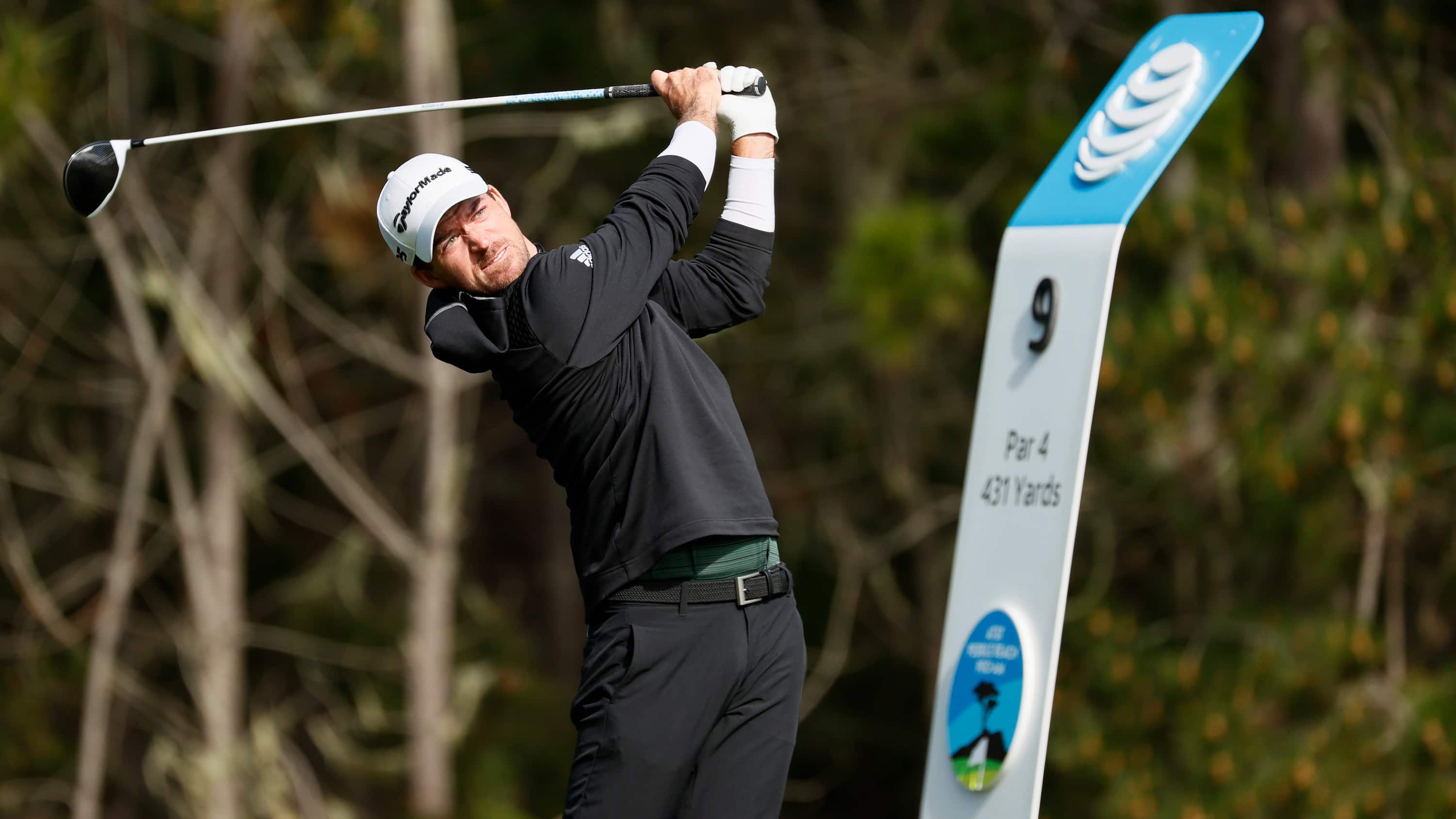 Defending champion Nick Taylor of Abbotsford, B.C., shot a 1-under 71 to sit at 4-under par, making him the lone Canadian to make the cut at the AT&T Pebble Beach Pro-Am. 1:28

Spieth surged into the lead with a gap wedge that got the ridge perfectly on the skinny green at No. 4, and followed that with a 5-iron to 45 feet, a birdie putt helped by Rickie Fowler going first from the same line.

He reached the front of the green on the par-5 seventh with a hybrid for a two-putt birdie, then figured his one miss off the tee would cost him on No. 8.

“I hit the tree off the tee,” he said with a smile. “I toed a 3-wood and it came out in the fairway and I hit a 7-iron that happened to go right of the right pin, below the hole. That was a steal there, for sure.”

Good breaks have been hard to find for Spieth over the last two years. He has seen his share of shots that hit the tree and carom out-of-bounds, or tee shots that bury in the rough instead of sitting up.

“I’ll tell you what, it’s crazy. You go on runs of cards out here,” he said. “You get good ones and then you go on a bad run of cards. I’m now hitting it and kind of thinking it’s going to be a good break again, which is really nice.

“But you don’t rely on that,” he added. “It’s just when it happens, it’s obviously really nice.”

The cut was at 1-under 143 after 36 holes on Pebble Beach and Spyglass. Only two courses are being used this year because the tournament has no amateurs (or spectators) due to COVID-19 restrictions.

Fowler, who played alongside Spieth and defending champion Nick Taylor (at 4-under 140), shot 75 and missed the cut for the second straight week. Fowler has gone just over a year since his last finish in the top 10.