Former FBI Director James Comey on Wednesday defended the bureau’s probe of links between Russia and Donald Trump’s 2016 election campaign against attacks by Republican senators over the secret monitoring of a former campaign aide, and expressed puzzlement over certain statements made by the president and U.S. Attorney General William Barr.

The Senate judiciary committee hearing produced no new disclosures about the FBI investigation, and Democrats accused majority Republicans of politicizing the issue while failing to examine alleged Russian interference in this year’s presidential election.

Senate Republicans say the FBI probe of Trump’s campaign, later handed off to special counsel Robert Mueller, was intended to undermine Trump’s candidacy and presidency, and the panel has been examining the roots of the investigation, known as “Crossfire Hurricane.”

A Justice Department inspector general report did not find evidence of partisan bias and concluded that the investigation was opened for a legitimate reason, but Republican lawmakers have seized on those errors to cast broader doubt on the Russia investigation overall.

Committee chair Sen. Lindsey Graham and other Republicans sought to pin some responsibility on Comey for the errors found in FBI applications for secret court warrants to monitor the communications of Carter Page, who briefly served as a 2016 Trump campaign advisor.

“To me this is a stunning failure of the system to work,” said Graham, a staunch Trump supporter, who took Comey to task for being “completely clueless” about mistakes made in the Foreign Intelligence Surveillance Act (FISA) warrants.

Comey said he accepted responsibility for certifying those warrants given what he said was sloppiness, but it said was one aspect of entire body of investigative work.

“The overall investigation was very important,” said Comey. “The Page slice of it? Much less so.”

Comey said the FISA problems were likely the problem of a process that had grown too diffuse, with information falling through the crack and communication gaps resulting.

He defended the FBI’s decision to launch the counterintelligence investigation into possible ties between Russia and the Trump campaign. Among other reasons, he noted that former campaign manager, Paul Manafort, was working with a man that U.S. officials deemed a Russian intelligence agent, as detailed in a recent Republican-led Senate report.

Comey expressed concern that Barr — who has taken criticism from Democrats and Mueller himself for his comments downplaying the special counsel’s findings — has questioned the predicate of investigating the ties between Russia and Trump associates.

“The notion that the attorney general believes that was an illegitimate endeavour to investigate mystifies me,” he said.

Comey also questioned the decision of Barr’s Justice Department to seek a dismissal of charges against Michael Flynn, despite the fact that Trump’s former national security adviser pleaded guilty on two occasions to lying to the FBI before changing his legal team and withdrawing his plea.

A judge is considering the Justice Department’s request and heard on Tuesday that Flynn’s attorney discussed the case with Trump, a breach of norms.

“It’s deeply concerning because this guy is getting treated in a way that nobody’s been treated before,” Comey said of the Flynn case.

Comey was fired by Trump in May 2017. Republicans have joined Trump in heaping scorn on Comey, but Democrats haven’t embraced him either, angered by his public statements made during the Hillary Clinton email case that they believe contributed to her loss. The saga of the FBI’s role in the 2016 election is the subject of this week’s Showtime miniseries, The Comey Rule.

q16:20The Comey Rule director on doing justice to the real-life political drama of the 2016 U.S. election

Writer and director Billy Ray has a new two-part miniseries adapted from the memoir of former FBI director James Comey. It’s called The Comey Rule and the Washington Post described it as “replaying a nightmare while we’re still having it.” Less than two months away from the 2020 U.S. election, Ray joined Tom Power to talk about the making of the miniseries, which debuts on Showtime on Sept. 27. 16:20

Comey, in questioning from Democrats over a recent report from the New York Times over the state of Trump’s finances, said significant debt could lead to foreign entities having leverage over the president.

“I don’t know whether the Russians have something over President Trump, but it’s difficult to explain his conduct, his statements in any other way. Especially his refusal to criticize Vladimir Putin, even in public.

WATCH l Comey tells CBC News in 2018 of his hard choices during the campaign: 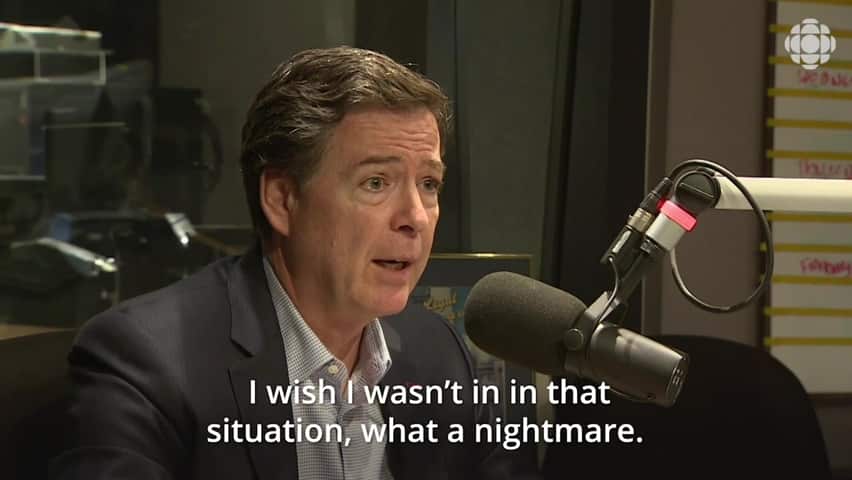 Democrats lamented the backward-looking nature of the hearing on Wednesday, seeking to make the case that the Russia investigation was valid and that the committee’s time could be better spent on other matters.

“Most people think we should be talking about other things, except maybe President Trump,” said Democratic Sen. Amy Klobuchar of Minnesota, while Sen. Patrick Leahy of Vermont described the hearing as a “political errand” for the president.

For their part, several Republicans cited the case of a former FBI lawyer, Kevin Clinesmith, who pleaded guilty in August to doctoring a CIA email submitted with an application so that it said that Page was not an agency source, when in fact, he was.

“I know nothing about Mr. Clinesmith other than what I’ve read,” Comey said.

Republicans also seized on information that national intelligence director John Ratcliffe, a former Texas congressman and Trump loyalist, just declassified even though he said he does not know if it is true. In a letter to Graham, Ratcliffe said that in late July 2016, U.S. intelligence agencies obtained “insight” into Russian spycraft alleging that Clinton, the Democratic presidential candidate, had “approved a campaign plan to stir up a scandal against” Trump.

But Ratcliffe added that American intelligence agencies do “not know the accuracy of this allegation or the extent to which the Russian intelligence analysis may reflect exaggeration or fabrication.”

Comey said the information did not “ring any bells” with him from his time leading the FBI.

“I’ve read Mr. Ratcliffe’s letter, which frankly I have trouble understanding,” he said.

The Mueller investigation found that Russia sought to interfere in the 2016 election to boost Trump’s candidacy but did not establish a criminal conspiracy despite Trump team contacts with assorted Russian invidivuals.

Mueller examined multiple episodes in which Trump sought to stymie the Russia investigation. In his lone appearance giving testimony on Capitol Hill, Mueller said he believed there was enough evidence to charge Trump with obstruction had he not been president.

The Senate panel led by Graham has already heard from Rod Rosenstein and Sally Yates, both former deputy attorneys general, and has scheduled testimony next week from ex-FBI Deputy Director Andrew McCabe, who led the agency for a time after Trump fired Comey.