When the Duke and Duchess of Cambridge visited B.C. in 2016, they were presented with gifts of wraps, blankets and bowties adorned with the distinctive, eye-catching art of the coastal First Nations.

Each piece was created by Vancouver designer Chloë Angus, who was also responsible for every outfit then-premier Christy Clark wore during the royal visit.

Angus is one of the most prominent designers in B.C.’s Indigenous apparel world, with clothing sold on BC Ferries and in major museums and art galleries across the country. She’s frequently featured in magazine pieces highlighting Indigenous-owned fashion houses, has applied for at least one grant meant to support Indigenous artists and advertises her company as co-owned with her Métis husband.

But Angus is not Indigenous, and corporate records show she alone owns her company, Chloë Angus Design, which has been a sole proprietorship since its founding in 2004.

A community of B.C.-based Indigenous clothing designers say they’re fed up with Angus misrepresenting her company, and they’re accusing her of profiting from watering down their cultures to satisfy the “average white lady” that Angus has said is her target audience.

Their concerns raise questions about who has the right to make money from the cultural and artistic traditions of First Nations, Métis and Inuit communities in Canada. The prints Angus uses on her apparel are licensed from Indigenous artists, two of whom told CBC News they have no problem with what she’s doing.

But Haida designer Dorothy Grant, who has been incorporating Haida art into her fashion for more than three decades, has a different perspective.

“There’s a long history of abuse, of theft of everything that belongs to Indigenous people, and this is another format of that,” she told CBC News.

Angus is far from the only non-Indigenous businessperson to make a living from Indigenous art, but a number of designers who spoke with CBC News say her prominence in the fashion industry has galvanized them.

“The outrage that we’re feeling at how far and how extreme she’s stepped into our realm, it definitely united us,” said Haida and Cree designer Erin Brillon of Totem Design House.

In an interview, Angus acknowledged she has faced a lot of criticism in recent months, but says her goal with the Indigenous-inspired Spirit Collection has always been to create better understanding between non-Indigenous Canadians and their Indigenous neighbours.

“It is a very racially motivated time,” she said of the criticism. “I have been an ally in wanting to support Indigenous people and Indigenous businesses since I was a young person.”

In a follow-up email, Angus charged that the “negative campaign against me personally stems from misinformation and fear.”

Angus’s designs are created in collaboration with Indigenous artists, who license their work in exchange for royalties.

Two of the Indigenous artists who’ve collaborated with her, Corrine Hunt and Steve Smith, say they have no complaints about the process. Hunt described Angus as a “gem” in an interview with CBC News, and said she’s seen no evidence of cultural appropriation.

“I know that from a capitalistic standpoint, when you license designs from a person, it’s a business agreement and that’s all above board. But where we look at it, it’s not just about business, it’s about who we are as a people,” Brillon said.

Sisters Aunalee Boyd-Good and Sophia Seward-Good, of Ay Lelum–The Good House of Design, said they’re careful to make sure their work honours ancient laws protecting the arts and culture of their family, traditions that need to be protected for future generations.

“As a Coast Salish design house, we have been turned down by gift shop buyers in our own territory because their floor space was allocated to licensed products, and this needs to change,” the Goods said in a written statement.

“We urge the consumer to identify and support authentic Indigenous makers and businesses first, especially when operating in their unceded territories.”

Creating public awareness of culturally conscious fashion that respects community traditions and supports Indigenous entrepreneurs is one of the main goals of the Indigenous designers and artists interviewed for this story.

They also want Angus to be fully transparent about her company — or better yet, to step aside and stop using Indigenous motifs in her work.

“I think we have to draw the line somewhere,” said Kwaguilth and Squamish designer himikalas, who has created clothing and jewelry for the last 35 years as Pam Baker.

Fashion company is not ‘held jointly’

Attire removed Angus from the list after outcry from commenters, but her name remains on similar lists from publications like Fashion magazine, The Kit and Refinery29.

Angus does not pretend to be Indigenous, describing herself instead as an ally.

But the confusion over ownership of her company is understandable.

Until very recently, the Chloë Angus Design website described the company as “held jointly” by Angus and her Métis husband, executive Gabe Eyers. Public documents available through B.C. Registry Services show Angus’s husband has no ownership in the business.

Shortly after CBC News reached out to Angus to request an interview for this story, her company’s site was updated to say the company is the couple’s “business baby.” It is still described as “over 50% Métis owned” on Angus’s Google business profile.

Angus said she described the company as “held jointly” because she considers it a family business, and said that despite his lack of an ownership stake or official title with the company, her husband often pitches in with everything from loading boxes to writing budgets.

She said the changing descriptions her company’s ownership reflect the “growth” of the business.

“It’s also the personal growth of my husband and his own personal journey and reclaiming his rightful Métis heritage,” Angus said.

But other designers take issue with Angus using her husband’s Métis heritage as an entry point for profiting from the arts and culture of the culturally distinct coastal First Nations.

Vancouver-based Métis designer Evan Ducharme said he would never presume to use elements from another community’s artistic traditions. Even when he incorporates Métis themes into his work, he takes special care to make sure they’re appropriate.

Another sore spot for Angus’s critics is the fact that her company received $10,250 in funding in 2019 from the Canada Council for the Arts “Creating, Knowing and Sharing” program to travel to London Fashion Week.

A spokesperson for the council confirmed the grants are meant to support Canadians who “self-define as First Nations, Inuit or Métis.”

Though the grant was awarded to her company, Chloë Angus Design, Angus says she applied as a group collective. The program’s criteria stipulate that eligible collectives must have two or more members, more than half of whom identify as Indigenous.

A copy of Angus’s application, which she provided to CBC News, defines her collective as Angus and seven artists with whom she has collaborated. None of the artists were included in the team she proposed for the trip to the U.K.; she writes that they have “appointed” her as their representative.

Angus argues that her application wouldn’t have been approved if she didn’t meet the requirements of the program.

“That grant program is incredibly detailed and vetted, so nobody is getting through that who is not honest and transparent and doing the right thing,” she said.

Some of those who spoke with CBC News for this story also point to a number of situations where they believe Angus has asked for or taken opportunities they believe should be reserved for Indigenous designers.

That includes things like keeping a booth at Indigenous Peoples Day in Vancouver, and asking to be included in the 2017 Vancouver Indigenous Fashion Week.

That event’s founder, Joleen Mitton, told CBC News she included one non-Indigenous designer who collaborates with Indigenous artists in 2017 in the spirit of reconciliation. Mitton says she chose to reject Angus after Angus touted her connections to former premier Clark and the royals — neither of which are particularly beloved by the wider Indigenous community.

Angus wrote in an email to CBC News that she believes Mitton’s decision was based on “petty immaturity and personal judgment.”

The origin story that Angus often tells begins with her childhood near Jervis Inlet on the Sunshine Coast, where she felt a close connection to her neighbours in the shíshálh Nation. She says her goal with the Spirit Collection, which began as a collaboration with Haida artist Clarence Mills, was to share the experience with others.

Cultural anthropologist Solen Roth interviewed Angus for her 2013 PhD thesis at UBC, and Angus explained that non-Indigenous women were her target market from the beginning.

“I started thinking about doing this contemporary line that would be … not too bold for the average white lady to wear,” she told Roth.

“Some of the clothing that is being made with Native designs, not a lot of ladies can pull it off. It’s often quite traditional, in heavier wool … and the images on them are very bold. And I can’t wear something like that, even though I have a huge appreciation for this.”

That is infuriating to Kwiaahwah Jones, a curator and tattooist of Haida and Nisga’a descent who created the Haida Now exhibit at the Museum of Vancouver.

“Haida art is so sophisticated. I consider it a form of sacred geometry that our ancestors perfected over a very long time,” Jones said. 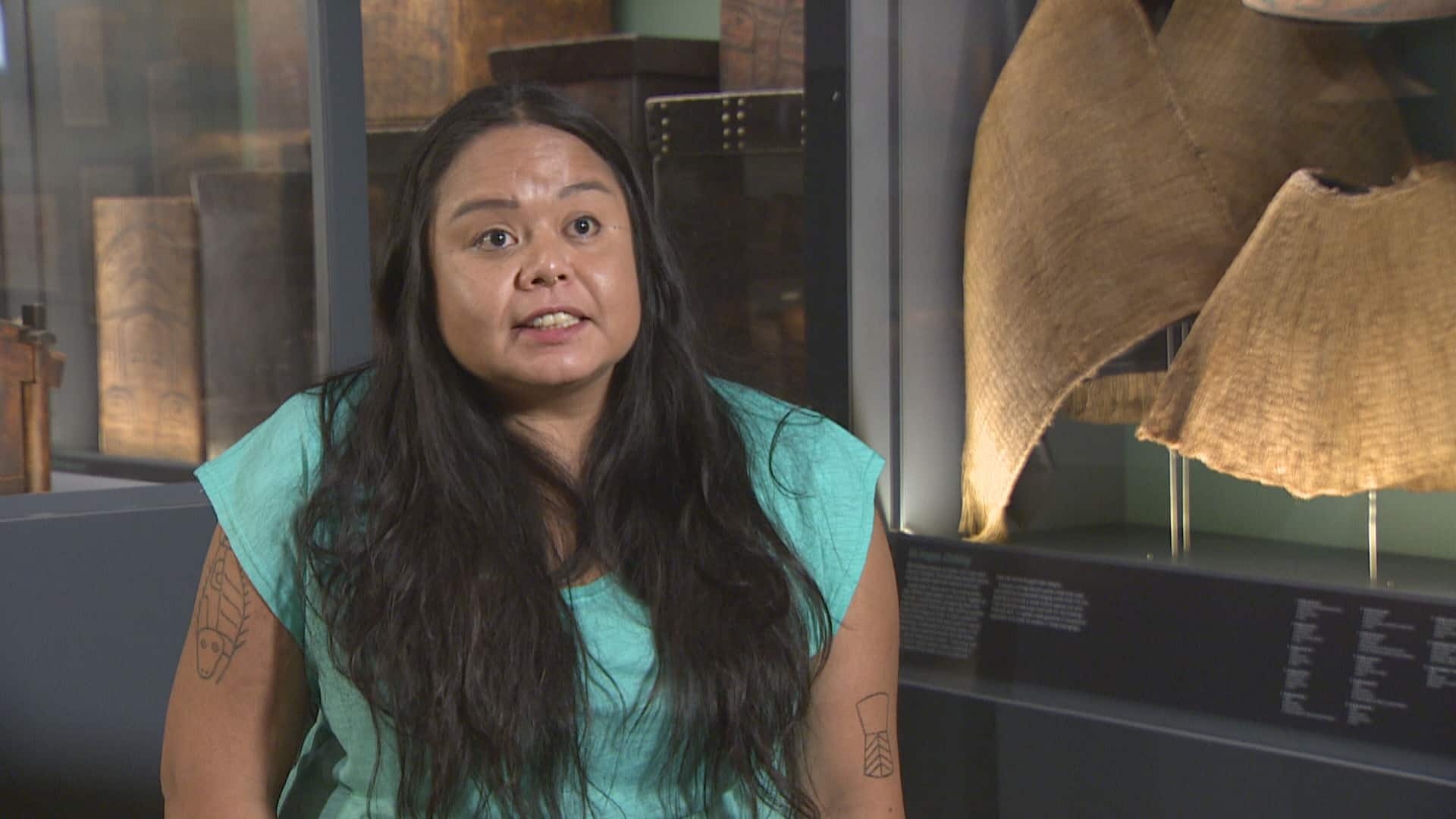 Jones, who is of Haida and Nisga’a descent, says Haida art was developed over thousands of years and should not be dumbed down. 1:06

For established designers like Grant, who has counted many white women among her customers, Angus’s attitude is a personal affront. Grant said her customers are proud to wear her designs because they represent Haida culture and Canada as a whole.

“For somebody to say that they design particularly for white people and that they’re kind of better at it, I find that very offensive and somewhat racist,” Grant said.

Angus stands by her 2013 quote, and denies that she has watered down the art of the Haida and other coastal First Nations for the consumption of white people.

“I know none of the artists that work with me in collaboration on creating the Spirit Collection feel that their work has been watered down. In fact, more than anything, we have brought just more fashion into it,” she said.

‘This has been going on for way too long’

The designers interviewed for this story said they want to see an end to non-Indigenous business people profiting from Indigenous art.

“The bottom line is this has been going on for way too long, and we have to take hold of this and do something about it,” said designer and gallery owner Teresa Walker.

Lou-Ann Neel, a Kwakwaka’wakw artist and head of Indigenous Collections and Repatriation at the Royal B.C. Museum, said she has long argued for a form of community copyright for First Nations art form.

“I want the legislation to be abundantly clear that there are communal rights that are extended into our communities,” Neel said.

Grant points out that Article 11 of the UN Declaration on the Rights of Indigenous Peoples, which became law in B.C. last year, says Indigenous art forms must be protected from exploitation.

As for Angus, she says she has no immediate plans to change the way she works, but she would be open to collaborating with the designers who have criticized her.