As COVID-19 surged across Canada, many operating rooms were idled, freeing up needed space for infected patients and redirecting medical staff and students to care for them. But the unprecedented move came at a cost.

“Learning has essentially ceased for a lot of the surgeons around the world,” Dr. Danny Goel said.

The orthopedic surgeon saw the problem as an opportunity for an idea germinated when he met two video game developers in a Vancouver pub in 2016. They got talking, and PrecisionOS was born.

In the months following that initial conversation, the small team built an elaborate virtual reality trainer, where medical students and surgeons could hone their tactile craft repeatedly and realistically by donning goggles and using simulated scalpels, surgical drills and other tools. All while physically distanced, and practiced on an artificial patient who wouldn’t get hurt if they made a mistake.

The system was unveiled in 2018, and interest has grown over the past year as the pandemic has closed ORs or restricted surgeries. The technology has now been adopted by 22 medical schools and health systems across North America.

“I was amazed at how realistic it was,” said Dr. Peter Ferguson, the head of orthopedic surgery at the University of Toronto’s Temerty Faculty of Medicine, who first tried the goggle-based VR system in his living room.

“I went to our faculty and I said this is something that we really have to get on board with.”

The medical school soon bought a dozen of the made-in-Canada virtual reality systems, allowing surgical residents to practice knee replacements, resetting broken legs, or drilling into bone to install supportive screws, all through a simulated process Dr. Ferguson describes as “a blast.”

He sees the system as an opportunity to reduce risk, even beyond COVID-19. For instance, in hospitals where medical students are taught, studies have shown patients are more likely to experience problems post-surgery.

“That’s a fact,” says the surgeon for the largest health network in Canada. “So if we can decrease that incidence of complications by allowing these individuals to become more competent in this low-stakes environment, it will theoretically improve patient outcomes.”

A big shift for game developers

The two developers behind the complex graphics and VR technology are veterans of Vancouver’s video game industry.

Now they’re focused on mirroring the experience and look of an operating theatre.

“It improves the confidence of surgeons or residents,” O’Connor said. “If they haven’t done a certain technique for many, many months, they can go into the OR in VR and they can train up on that technique again, and then go and operate on that procedure the next day with a higher level of confidence.”

It’s been a big shift for Oliveira to go from designing popular video games to creating detailed simulations for cutting into flesh and bone. The transition, he says, is “blowing my mind. It’s great to be able to transfer some of this technology so it serves a higher purpose.”

It takes up to six months to build a surgical teaching module from scratch. All the visuals are developed in-house and the workflow is identical to building a video game.

However, the team also had to educate themselves about the medical device industry to understand the challenges surgeons face. They attended real surgeries to witness in-person the procedures they would be simulating. And they mine expertise from a group of nearly 100 medical consultants from around the globe. 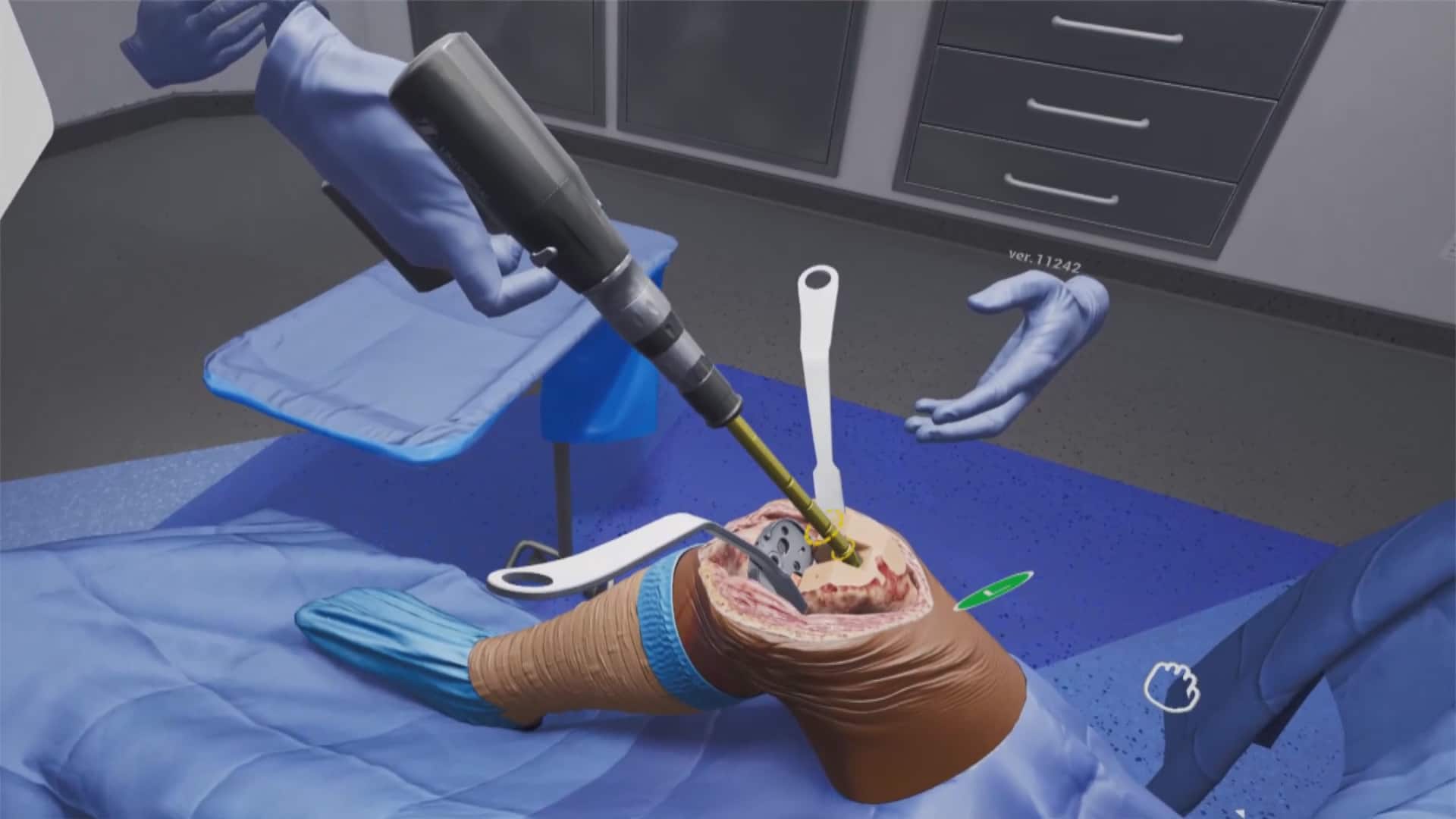 To make the animation as realistic as possible, O’Connor designed a simulation that allows a surgeon to saw, ream or drill at any location or angle inside the virtual patient, and have the effects of that action to the bone and soft tissue displayed in real-time.

PrecisionOS was recognized as Start Up of the Year 2019, an award sponsored by Microsoft, and won the highly competitive Global EdTech and VR awards in 2020, sponsored by Reimagine Education.

Dr. Goel gives part of the credit to the company’s local environment.

“The success of this story is highly contingent on its location,” he said, “Vancouver has really sort of led the charge on game development, film and computer graphics. And I think that marriage between medicine and technology is unique to our city here.”

With some surgeries postponed due to COVID-19, third-year University of Toronto surgical resident Maegan Shields has fewer opportunities to perfect her skills. In an operating room idled by pandemic demands, she slips on the PrecisionOS VR goggles, picks up a set of tool-paddles and does simulated surgery on the hip of a virtual patient.

“It’s a pretty impressive technology,” Dr. Shields said after her first experience doing that procedure in VR. “I think it has a lot of potential, especially right now with all this cutting back on OR time.”

She deftly works around muscle tissue to take aim at a fractured hip. And she’ll do this same process over and over, honing her technique.

“If there’s anything you can do to sort of become a little bit more efficient at knowing the steps,” she said, especially in a “low risk, low stakes environment,” it’s helpful.

Her instructor, Dr. Ferguson, is quick to note the VR technology does not replace the real thing. It’s a less tactile experience, in a profession where touch and feel are integral to locating anatomy and identifying medical issues, for example.

But he adds that it’s much better than any simulation doctors and students previously had. And, during a pandemic, it’s better than the alternative, which would often be to do nothing and risk having a doctor’s surgical skills and confidence atrophy.

“It’s significantly so much more important now that we are able to educate physicians from all over the world on how to perform surgery safely, and do it in a digital way where travel and meeting in labs is just not possible,” Dr. Goel said.

Watch full episodes of The National on CBC Gem, the CBC’s streaming service.