Canada’s hard-hit hospitality industry is asking for more help from government to survive the economic impact of COVID-19. But even as hotel owners are seeking more aid from Ottawa, some workers say they’re not making good use of relief programs already out there.

Hotel workers staged demonstrations in Toronto, Ottawa and Vancouver this week, to draw attention to the plight of an industry that has been hard-hit by the ongoing pandemic.

Hotel bookings are down by 90 per cent in some cases, which has created a drastic drop in demand for workers.

The industry was effectively shut down just as many others were in the early days of the pandemic. The Hotel Association of Canada says most hotels did their best to maintain staffing levels, hoping for a return of paying customers.

Some took advantage of an emergency government program known as the Canada emergency wage susidy, or CEWS, which paid up to 75 per cent of an employee’s salary, as long as they remained on the payroll.

Room attendant Leonora Mulholland lost her job at a downtown Toronto hotel in March when the pandemic struck, but she says her employer eventually brought her back on once CEWS began.

But it didn’t last long. She was laid off again in August.

After 21 years working for the same hotel, she questions why her loyalty wasn’t reciprocated by her employer. 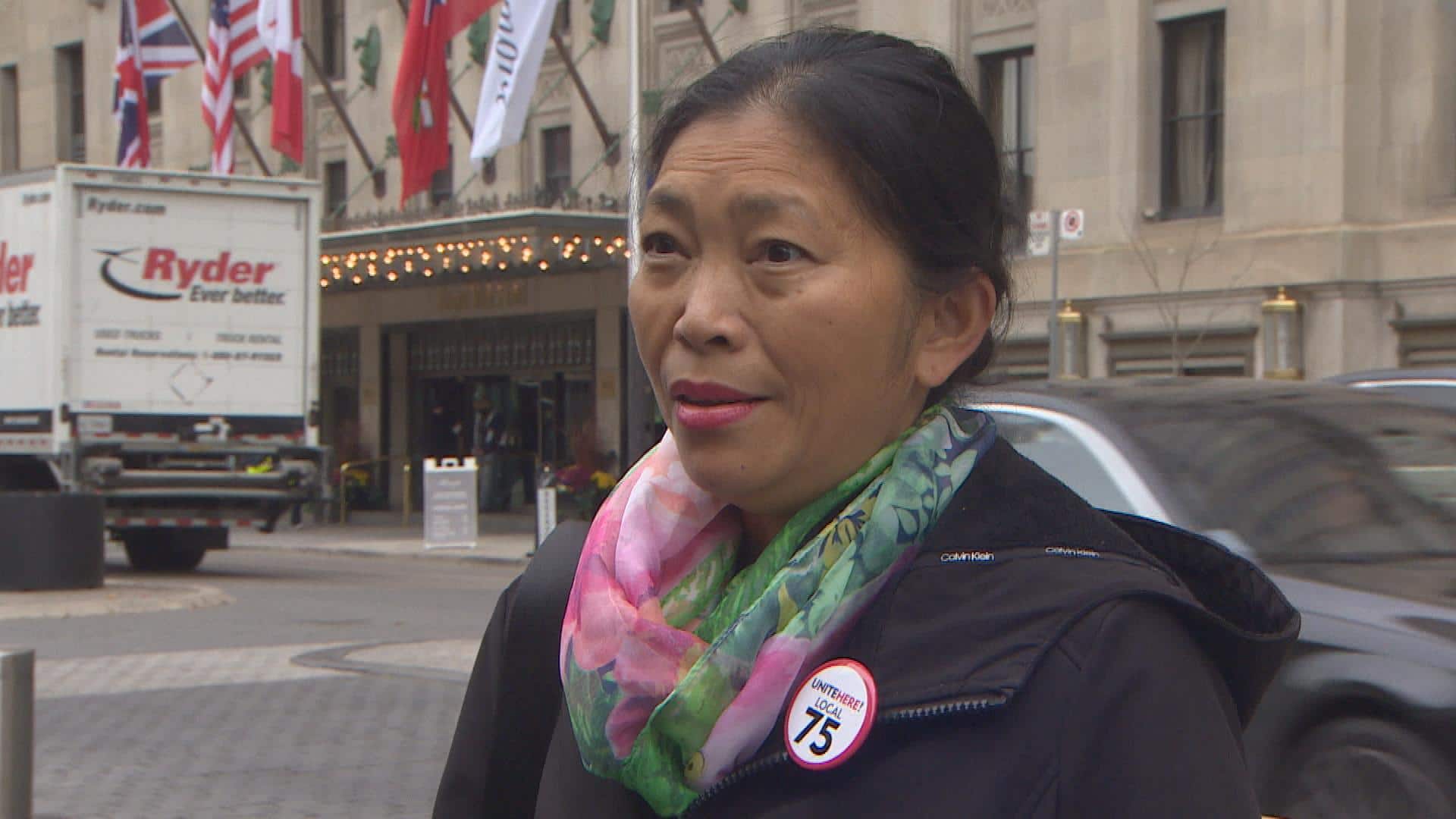 Leonora Mulholland, a laid-off hotel room attendant from Toronto, says the federal government should work with employers so they’re able to benefit from the Canada Emergency Wage Subsidy, and workers are put first. 0:50

Mulholland was one of about two dozen hospitality workers at a physically distanced demonstration in Toronto this week asking the government to step in and force hotels to use the wage subsidy to hire back like her back.

“I feel insecure,” she said. “Who knows what’s going to happen? How long this pandemic is going to be? We don’t know.”

Susie Grynol, president and CEO of the Hotel Association of Canada, says the industry is sympathetic to the plight of workers, but the industry shut itself down in the interest of public health, which is why the sector needs the government to step up with more support so that hotels can survive long enough to keep employing their workers long term.

“It’s put our industry on life support,” she said in an interview. “We missed the summer season. We’re heading into the off season and we’re not projected to recover until next summer, which means we’re not even halfway through this.”

Many hotels took advantage of CEWS, but recent changes mean the government now pays only about two thirds of the payroll costs, leaving hotels with next to no revenue on the hook for paying one third of the salaries for workers they don’t need.

“The changes to the wage subsidy program has meant that we can’t keep on every employee that we had previously,” Grynol said. “That means that some of our inactive workers are now going to be laid off permanently.”

In the recent throne speech, the government gave a vague promise of more help coming for the industry, but was short on details.

Grynol says the industry is asking Ottawa to roll back CEWS to its original terms and help the industry secure access to credit because loans from banks are drying up. And, if possible, they would love some help on fixed cost items such as property taxes.

“We’re hoping that we are going to see some support from government so that we can stabilize and ultimately bring back all of our employees,” she said.

The organizers of this week’s demonstrations say they agree that the industry needs more targeted help, but they’re wary of that help coming as a bailout for hotel operators that may do little to help the rank and file.

“Our concern is that any sector relief that’s provided to the industry would go straight to the pockets of the multimillion dollar corporations or the owners of the hotels,” said Shelli Sareen, secretary treasurer of Unite Here, a labour union representing 300,000 workers across the U.S. and Canada.

A blank cheque without accountability, “won’t benefit our members or the hospitality workers [and] frontline workers that have been most heavily impacted by the pandemic,” Sareen said.

Mulholland knows that the hotels themselves must be feeling the pain as well. But whatever the plan to help the industry is, she hopes the workers on the bottom like her get remembered along with the owners at the top.

“When they apply, the employers should put the workers first,” she said. “Not just apply, get the money, and keep it to themselves.”