Johnny Gaudreau’s overtime goal put an end to a dramatic matchup as the Calgary Flames edged the Vancouver Canucks 4-3 on Monday.

The 27-year-old winger scored 23 seconds into overtime to give Calgary the win (8-6-1) after blowing a 3-2 lead in the final minute of regulation.

Dillon Dube, Milan Lucic and Elias Lindholm all had goals for the Flames in regulation, and Rasmus Andersson notched a pair of assists.

Jacob Markstrom stopped 30-of-33 shots for the Flames, while Canucks goalie Thatcher Demko had 23 saves.

Vancouver held a two-goal lead near the end of the first period but saw the game start to slip away on a series of costly mistakes.

Monday marked the third matchup of a four-game series between the two sides, and the result gave Calgary a pair of wins heading into the final outing on Wednesday. 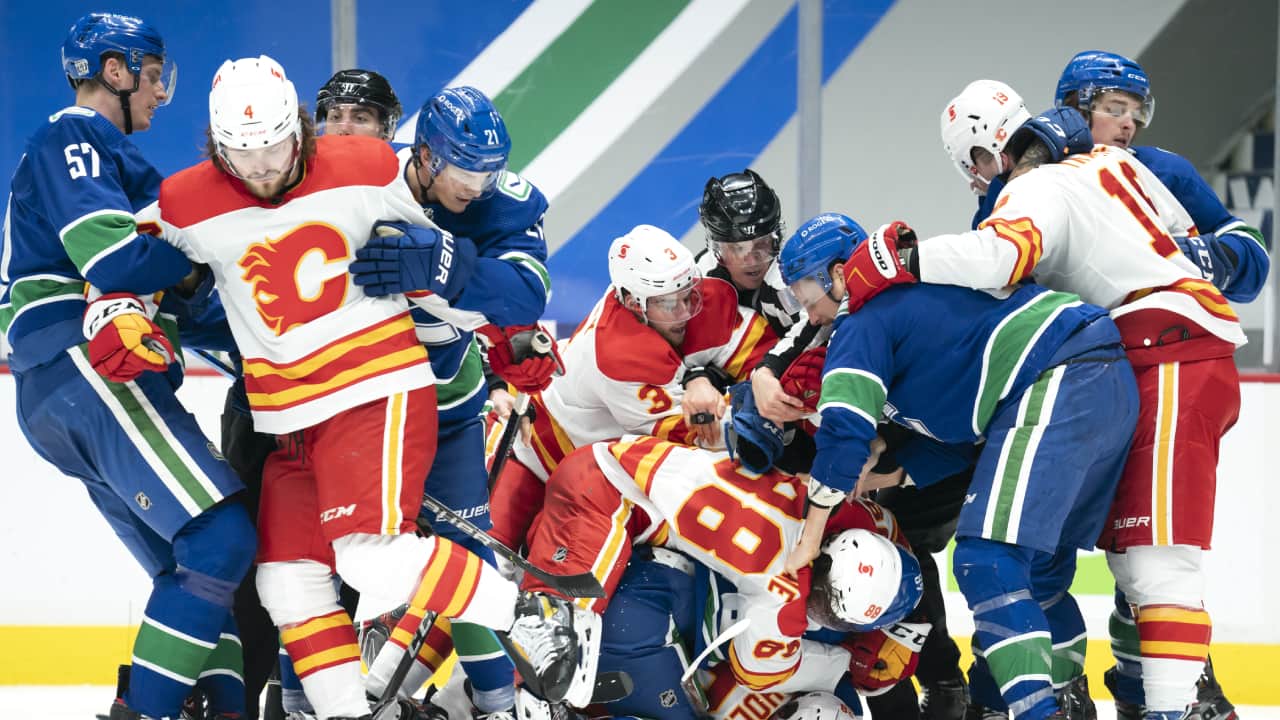 Johnny Gaudreau gave Calgary the 4-3 win after Vancouver sent the game to overtime with a goal in the final minute of the third. 0:53

Twenty-three seconds into extra time, Gaudreau scored with a shot from low in the left-hand circle. Some tense moments followed as officials reviewed the play for potential offside, but the goal was upheld after video review.

Boeser forced overtime in dramatic fashion, sniping a shot past Demko with 30.2 seconds left on the clock.

It was a short-handed tally as Vancouver defenceman Quinn Hughes sat in the box. The Canucks pulled Demko in a desperate bid to salvage the game.

Some sloppy play in the second frame proved to be Vancouver’s undoing on Monday.

Midway through the period, a soft pass from Horvat was picked off along the Calgary blue line. Lindholm got a breakaway as he entered the Canucks zone and blasted a wrist shot past Demko to even the score at 2-2.

The Flames capitalized on another mistake 15:51 into the second when Vancouver defenceman Nate Schmidt put the puck on Dube’s tape instead of clearing it from behind the net. Dube tucked a shot in behind Demko’s skate before the netminder could even register the misstep.

Vancouver had started out strong on Monday, gaining a 1-0 lead on the Canucks’ first shot of the game.

Hughes unleashed a rocket from the blue line and Pearson tipped it in past Markstrom 3:52 into the first period.

The tally came one second after Dube returned to the ice after serving a penalty for hooking.

The Canucks’ second strike was counted as a power-play marker, however.

Gaudreau was booked for interference midway through the first, a call that was met with vocal protests from the Flames bench. Just over a minute into the penalty, Calgary’s Connor Mackey was called for high-sticking, gifting Vancouver with 54 seconds of 5-on-3 hockey.

J.T. Miller sent a crisp pass to Boeser at the goal line and the winger instantly re-directed the puck to Horvat in front of the Calgary net. The Canucks captain hammered a one-timer in past Markstrom to put his side up 2-0.

Vancouver was 1-for-6 with the man advantage on Monday.

Lucic slashed the lead back to one before the first intermission, ripping a shot past Demko from high in the slot with 24 seconds left on the clock.

It was the Vancouver native’s fourth goal of the season.

The dislike between the two sides was evident Monday. Multiple minor skirmishes saw players exchange colourful words and shoves before tensions came to a head in the third with several players jumping into a melee in the Canucks end.

Once officials had separated the players, Tkachuk and Vancouver’s Jake Virtanen were each sent to the box for roughing.