When Dr. Amun Sandhu moved to the United Kingdom a decade ago to study medicine, her superiors predicted her career advancement would be limited.

“You don’t tend to see very many female surgeons,” she said she was told. “You’ll end up being a GP, anyway.”

While Sandhu is now a doctor of acute medicine in East London, the Vancouver native still feels a gender bias.

She recounted times when she has approached patients’ bedsides, flanked by a male nurse or junior colleague, and the patient will speak over her entirely, assuming the man is the doctor.

Lorraine Sunduza, the chief nurse for the East London Trust, has had similar experiences. Originally from Zimbabwe, Zunduza said there have been times when she has assigned tasks to her staff, only to have them question her authority.

Of the people who work for the National Health Service in Britain, 77 per cent are women. But while they make up more than three-quarters of the NHS workforce, women account for less than half of its most senior members, on average, according to a study published last month by the University of Exeter.

This lack of representation makes things more difficult for female health-care workers, said Sandhu — from commanding the respect they deserve to earning reasonable pay to being given the proper equipment to do their jobs.

Medical careers based on ’20th-century model’

The Exeter study, led by professor Ruth Sealy of the university’s business school, included an analysis of more than 3,000 directors across the NHS in England, as well as more than 70 in-depth interviews with board chairs, directors and aspiring executives.

The senior female NHS employees Sealy interviewed reported having overcome workplace inequality and domestic pressures to secure a leadership role. “Women who get to senior positions in leadership have been clinging on with their nails,” she said.

A major factor in determining whether someone in health care can advance to the next rung of the ladder is their ability to get experience in several different areas of medicine, says Sealy.

However, a lack of flexibility from senior decision-makers or an alliance board makes it difficult for women to advance, she adds.

“Medical careers are still based on a … 20th-century model,” said Sealy.

Sandhu said that in her experience, female consultants tend to be more aware of the work-life balance many women in health still navigate today.

When asked to comment on the support available for female staff, a spokesperson for the NHS provided the CBC with an email response, saying the NHS is “offering greater options for flexible working, modern and inclusive recruitment practices and a continued focus on staff health and well-being as set out in the NHS People Plan.”

A gender bias can also be seen in pay. According to a review by the U.K. government this year, the overall NHS gender pay gap is 23 per cent.

Similar numbers can be seen in Canada. In Ontario and British Columbia, female doctors earn 30 per cent and 36 per cent less, respectively, than their male counterparts, according to a report published in the Canadian Medical Association Journal in August.

The gap is slightly smaller in the United States, according to a 2019 report published by medical news site Medscape. The average U.S. male doctor earns 25 per cent more than his female equivalent.

Another way the lack of female leadership affects women in the NHS is that they aren’t always provided appropriate equipment.

In the early stages of the pandemic, Sandhu and fellow health-care workers were “fit-tested” to ensure their personal protective equipment (PPE) was sufficient. The test involved having a fine spray, meant to mimic the virus, misted over their masked faces.

If the PPE was reliable, the wearer wouldn’t be able to smell or taste the spray. But Sandhu and many other female colleagues reported an orange smell and a bitter taste in the back of their throats. In other words, the mask didn’t fit properly.

Sandhu said this demonstrates that female health-care workers weren’t “taken into consideration” with regards to proper PPE, including masks, scrubs and gowns.

Most PPE is based on the sizes and characteristics of male populations from certain countries in Europe and the United States, according to a 2017 report from the U.K.’s Trades Union Congress. That means only three in 10 women in the U.K. have PPE that’s designed for their bodies, the report states.

Sandhu said many of her female colleagues had to use tape to adjust their XXL scrubs, and when surgical caps were in short supply, they re-purposed excess gown material for handkerchiefs to tie around their heads.

“We were told, basically, ‘This is what we have, this is what you’ll need to use,'” said Sandhu.

The quality of supplies has improved greatly since the number of coronavirus cases dropped, Sandhu said, but earlier in the pandemic, the lack of proper PPE left her feeling unprotected.

Sealy said that “when you are in less than a powerful position, it’s much harder to question the way that things are being done, and to question why you don’t have the PPE … and to push when you don’t get what you should be given.”

Women the ‘shock absorbers’ of society

Dr. Roopa Dhatt, a doctor of internal medicine in Washington, D.C., who also serves as the executive director of Women in Global Health, said “there are superhuman expectations on women.”

She calls women the “shock absorbers” of society, saying they continue to work long hours for less pay than men in order to keep their communities moving forward.

Women in Global Health collaborated with the World Health Organization on a 2019 report on female leadership in health, which found that women make up more than 70 per cent of the global health workforce, but only hold one in four leadership positions.

“If we want to really actually make headway in creating not only stronger, more resilient health systems … women need to be in leadership roles. They’ve demonstrated it. They have the expertise. They have the power,” said Dhatt.

But those who have power also know they can be subject to abuse.

British Columbia’s chief medical officer of health, Dr. Bonnie Henry, spoke recently about the importance of addressing gender bias in order to ensure better treatment for the next generation of leaders.

In a panel presentation at the Union of B.C. Municipalities last week, Henry opened up about death threats and other negative comments she has received since the start of the pandemic.

“I sense that people find that [kind of abuse is] OK for a woman who is up-front, more so than some of our male leaders,” Henry said. 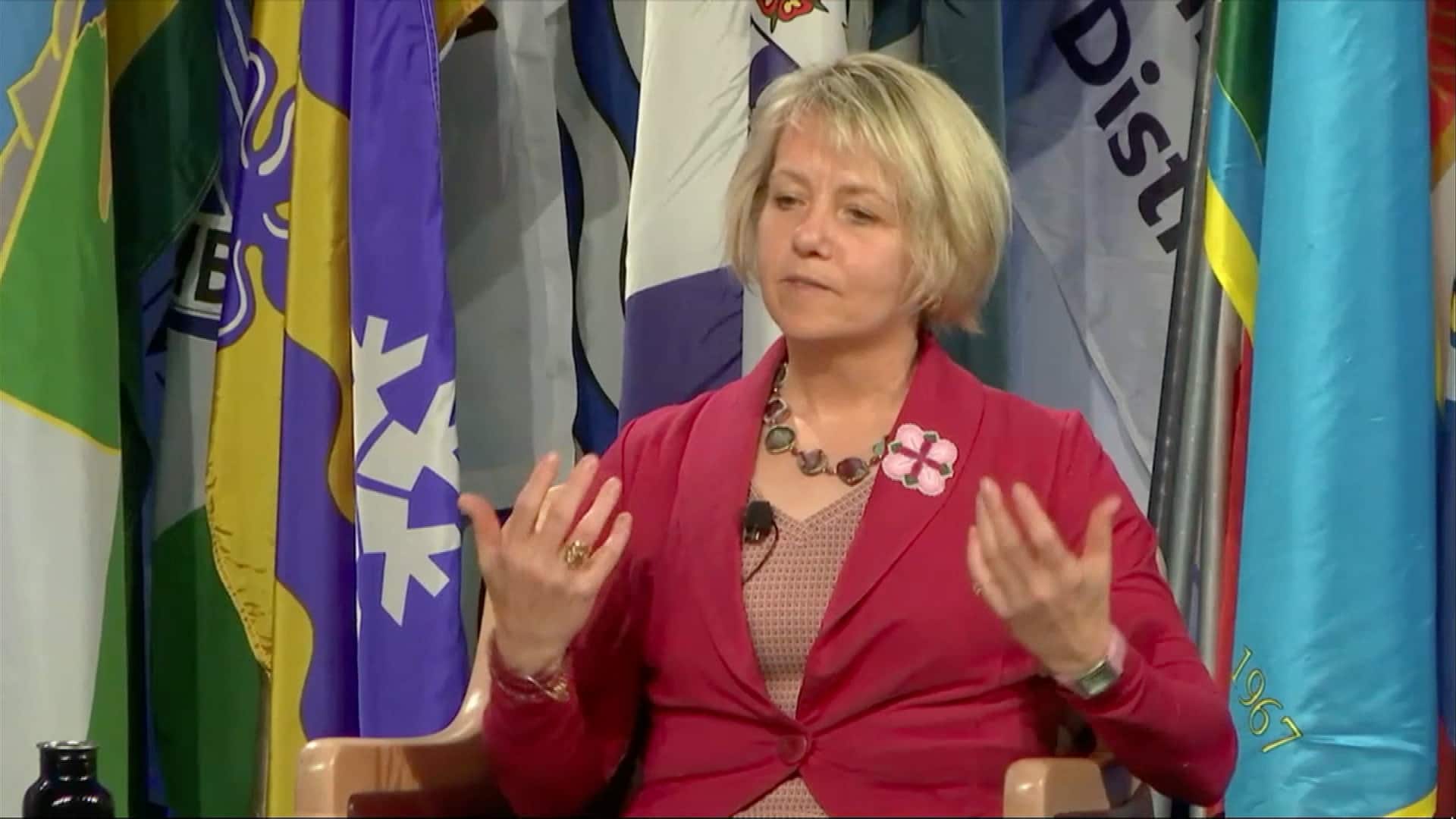 B.C.’s Provincial Health Officer talks about concerns over her safety as she handles the COVID-19 pandemic. 1:31

“The way that they’re conveying their messages is beneficial to female physicians and nurses and women in health care in general,” Sandhu said.