Forge FC lost a heartbreaker to Haiti’s Arcahaie FC in Scotiabank Champions League quarterfinal play Tuesday, conceding a cheap goal on a goalkeeping blunder in regulation time and then losing a penalty shootout.

The win earned Arcahaie a berth in the 2021 CONCACAF Champions League, alongside the confederation’s elite club teams, while moving it into the final four of the CONCACAF League — a 22-team feeder competition that sends six teams to the top-tier CONCACAF tournament.

Forge, the Canadian Premier League champion, has a chance to make the Champions League via a do-or-die play-in match next week.

The game was knotted at 1-1 after regulation time with Forge dominating play. but unable to get the go-ahead goal.

“Obviously this is one that stings,” said Forge coach Bobby Smyrniotis. “We’ve played two games in the last 2 1/2 months. This is the third one,” he added. “So there’s some kind of rhythm that’s not going to be there. And the toughest thing to do in this game is score goals.”

Forge looked in complete control up 1-0 early in the second half but conceded the tying goal in the 59th minute on a mistake by Triston Henry. He delayed playing a back pass from Kwame Awuah and his scuffed clearance attempt deflected in off onrushing Arcahaie forward Kervens Jolicoeur.

“That’s something maybe that’s going to happen once in his career,” Smyrniotis said.

“This one kind of stings but he’s fantastic. He’s goalkeeper of the year in the Canadian Premier League for a reason. It’s unfortunate that this comes at this moment but we’ve got to look past it,” he added. 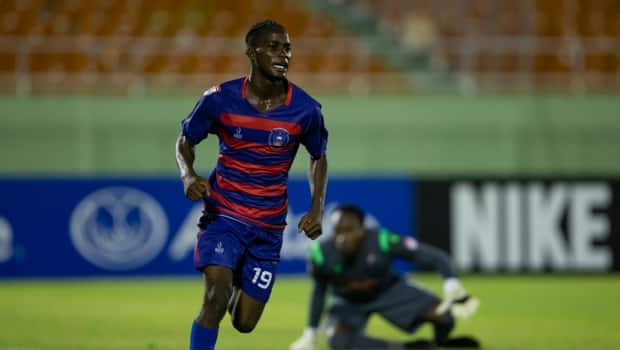 The Hamilton side lost 4-2 in a penalty shootout to Haiti’s Arcahaie in the Concacaf League quarter-finals. 1:33

After the tying goal the game was delayed by a hole in the Arcahaie goal netting, requiring several zip-ties to close the gap.

Krutzen opened the scoring in first-half stoppage time from the penalty spot after David Choiniere was taken down in the box by Hantz Anacius. Romondt dove the right way but Krutzen’s shot found the corner.

Krutzen also converted a penalty — in second-half stoppage-time — to give Forge a 2-1 win over Panama’s Tauro FC in the round of 16.

The 24-year-old Belgian defender rattled a free kick off the Arcahaie crossbar in the 49th minute as Forge tormented the Haitians with set pieces.

Forge will play the Saprissa-Marathon loser next week in the play-in match.

Regulation time ended with Forge driving at the Arcahaie goal but unable to get the go-ahead goal. It was the same for the seven minutes of stoppage time with Arcahaie players going down like bowling-pins, delaying play.

Tuesday’s game went ahead despite one Forge staff member and two Arcahaie players testing positive for COVID-19 ahead of kickoff.

CONCACAF said all three had been isolated. All other players and staff tested negative.

Smyrniotis made two changes to his starting 11 with Johnny Grant returning from suspension to take over from Kadell Thomas and fellow midfielder Paolo Sabak replacing Elimane Cisse.

Forge pressed from the opening kickoff while the Haitians looked to counter-attack. Choiniere almost scored for Forge in the opening minute but couldn’t get a boot to a low ball sent across the front of goal by Grant.

Forge dominated possession but could not translate it into scoring chance. And the Haitian side began to grow more comfortable on the ball as the deadlock continued.

Romondt was called into action twice late in the first half, punching away Forge free kicks. Mo Babouli thought he had scored on the stroke off halftime, heading in another free kick, but was flagged offside.

While Arcahaie was the home side, the game was played in the Dominican capital of Santo Domingo at the more suitable Estadio Olimpico Felix Sanchez.

The Canadian side then returned home, serving the mandated 14-day quarantine. Forge arrived in the Dominican on Nov 21, training in Punta Cana before making the 170-kilometre trip to the capital on Monday.

Arcahaie moved into the round of 16 when Belize’s Verdes FC pulled out of their Oct. 20 preliminary-round match due to positive COVID-19 tests. That match was also scheduled for Santo Domingo.

Forge, thanks to its triumph in the Island Games in Charlottetown during the summer, will also have another chance to qualify for the main CONCACAF club competition when it takes on Toronto FC in final of the Canadian Championship scheduled for the first quarter of 2021.

Forge exited the CONCACAF League in the round of 16 last year, beaten 4-2 on aggregate by Honduras’s Olimpia.