The federal sick leave program that was created to make sure people wouldn’t face financial hardship if they have to miss work due to COVID-19 is facing criticism for not protecting enough people who need it.

The Canada recovery sickness benefit (CRSB) was designed to make it easier for workers to follow public health advice urging people to stay home if they are sick. It provides $450 after taxes per week for up to two weeks.

But critics, workers’ advocates, public health professionals and policy experts say the program is flawed — and that it’s an insufficient replacement for having employers guarantee paid sick leave — which they argue would give low-wage and essential workers the income protection and job security they need to stay home if potentially infected with the coronavirus.

Patty Coates, president of the Ontario Federation of Labour, said provincially mandated paid sick leave is a superior policy because the missed pay is applied automatically to a worker’s paycheque, whereas the CRSB is paid out similar to employment insurance, meaning workers must apply and are paid by the government days or weeks after forgoing income.

“If they are working part of a week, they don’t get paid by the federal paid sick leave benefits for that week. So it leaves them without any income during that time.”

Employment Minister Carla Qualtrough’s office said people applying for the CRSB can expect to receive the benefit in three to five business days if they have set up direct deposit with the CRA. Alternatively, the payment generally arrives within 10 to 12 business days by mail.

“The Government of Canada continues to work at break-neck speed on EI Sickness Benefits and CRSB applications so that workers who need income support get it as quickly as possible,”  Qualtrough’s office said in a statement.

“We will continue working with our partners at all levels of government to ensure workers have access to this support when they need it most.”

Coates said the OFL is calling for seven permanent sick days in Ontario, plus an additional 14 days during a pandemic. The group held a “die-in” rally outside Queen’s Park in Toronto on Wednesday.

NDP Leader Jagmeet Singh, who was instrumental in pressuring the Liberal government to adopt the sickness benefit, says there are problems with the federal program.

“We need to make it more accessible, easier to get access to, and also cover people even better,” Singh said at a press conference on Thursday.

Singh is calling on the Liberals to recall Parliament earlier than scheduled — MPs are set to return on Jan. 25 — for a virtual session to, in part, make those fixes. The Liberals already plan to amend the program through legislation to close a loophole in the benefit that allows returning travellers to receive up to $1,000 for missing work due to quarantine requirements.

Conservative MP Peter Kent, who is also the party’s employment critic, said that loophole is the result of the Liberals rushing legislation through parliament last fall after prorogation. 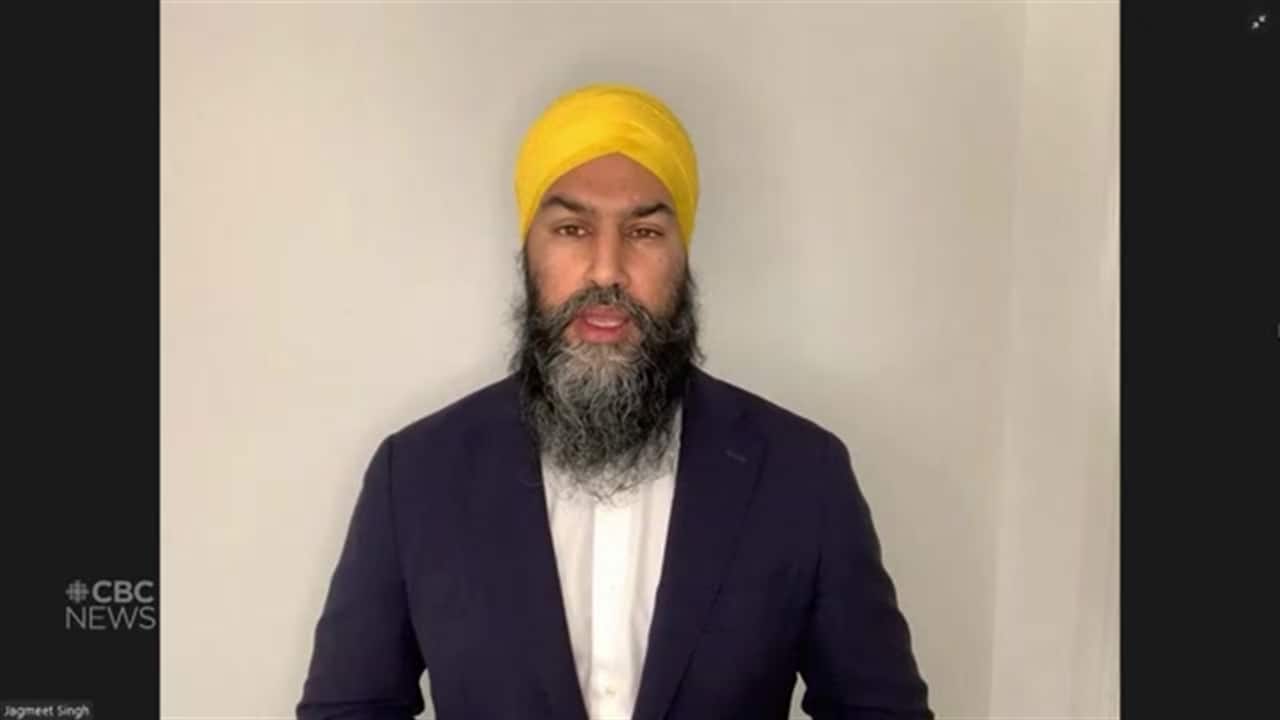 NDP Leader Jagmeet Singh spoke with reporters about the need for paid sick days at a video media briefing. 1:16

No sick leave for over half of Canadian workers

An estimated 58 per cent of Canadian workers don’t have access to paid sick leave through their employers, according to a report by the Decent Work and Health Network. That number rises to 70 per cent among people making less than $25,000 a year.

Only two provinces currently guarantee it — two days in Quebec and one day in Prince Edward Island. The rest offer various numbers of unpaid sick days, while federal employees are entitled to three paid days.

Rechev Browne, who has worked at a grocery store in Toronto for the past decade, said that 10 months into the COVID-19 pandemic, he worries that staying home sick would cost him.

“I wouldn’t be able to pay my rent. I might end up on the street because I might burn through my savings eventually,” said Browne. “Just having that reassurance that I’m going to get paid is like — I’m not putting myself and other people in public at risk … I’m not putting my coworkers at risk.”

There are renewed calls for paid sick leave for low-wage and essential workers who fear losing their jobs or income if they miss shifts because they’re sick or need to be tested for COVID-19. 1:51

The federal government introduced the CRSB as a temporary benefit in September to address the gap. To be eligible, workers must be unable to work at least half of their scheduled shifts because they are sick with COVID-19, because they need to self-isolate due to potential exposure, or if they have an underlying health condition that puts them at heightened risk if they catch the virus.

Qualtrough’s office said the Canada Revenue Agency takes a wide view of those eligibility criteria and that the program is designed to be flexible.

“[The Canada recovery sickness benefit] is an important part of our COVID-19 response to support Canadians and stop the spread of the virus,” Qualtrough’s office said in a statement.

“We did this so that no worker — regardless of where they live in Canada, or who they work for — has to choose between going to work while impacted by COVID-19 and putting food on the table.” 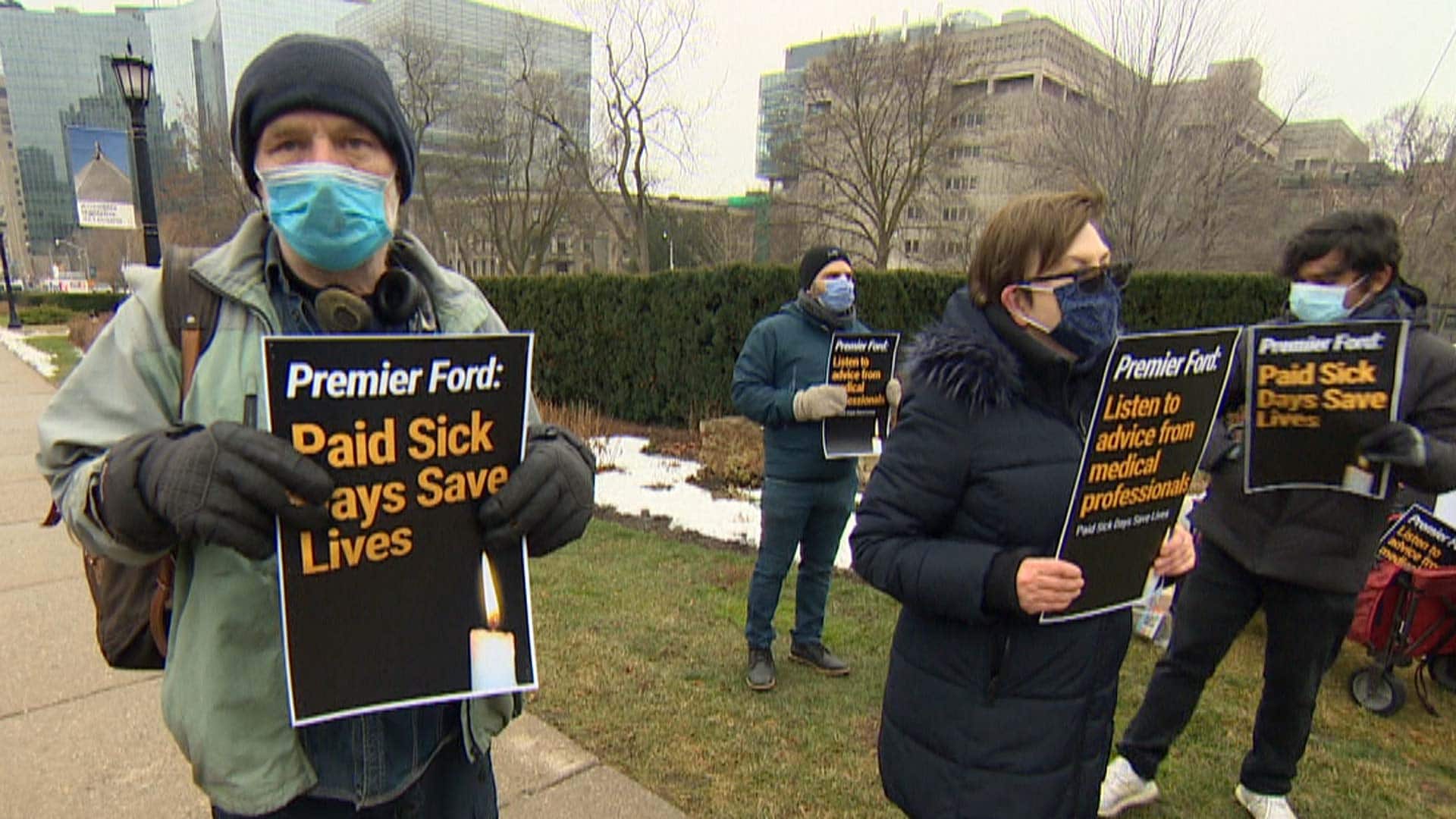 Registered nurse Carolina Jimenez says she and other front-line workers are frustrated over the lack of support from the Ontario government . Jimenez says not having paid sick days is affecting her ability to care for her patients. 0:25

Still, the number of people approved to receive the benefit has fallen from 67,000 in September to 20,000 in the first week of January, even though COVID-19 cases have risen sharply during that time. There is growing evidence that workplaces are key sites of transmission of COVID-19, with outbreaks declared at long-term care homes, food processing facilities and grocery stores, among other places.

Government, not businesses should pay for sick leave: CFIB

Randy Robinson, Ontario director of the left-leaning think tank Canadian Centre for Policy Alternatives, said those who can access the federal benefit promptly will receive less than their normal income.

“The sickness recovery benefit represents a pay cut,” said Robinson. “Kudos to the federal government for taking a run at this … but it’s really the responsibility of the provinces.”

Toronto’s medical officer of health and a group of Toronto and Hamilton-area mayors joined the calls Ontario to take action on paid sick leave this week.

Former Ontario Premier Kathleen Wynne had introduced two paid personal emergency leave days in 2018, but Premier Doug Ford scrapped them soon after taking office. He does not have plans to reinstate them — even after issuing a stay-at-home order that took effect just after midnight Wednesday.

“We aren’t going to duplicate areas of support,” Ford said when he issued the order on Tuesday.

Can COVID-19 lockdowns and stay-at-home orders work without paid sick leave, when some workers can’t afford to stay home if they’re unwell? Matt Galloway discusses the benefit of such a system, and what it would take to implement it, with Peel Medical Officer of Health Dr. Lawrence Loh and employment lawyer Lior Samfiru. 19:48

B.C. Premier John Horgan said last month his government was prepared to fill gaps in the federal program, but he needed more information on possible cracks in the plan.

The Canadian Federation for Independent Business (CFIB), a lobby group, fought against the paid sick days introduced by the Wynne government because it said they would impose exorbitant costs on small firms.

CFIB President Dan Kelly said he agreed that it does make sense to provide sick time as a stopgap measure during a pandemic, but that the government should pay for the days. He said the CRSB is sufficient.

“To impose the costs on small firms at this stage would be really challenging, of course, because most small firms are desperately hanging to say stay on,” said Kelly. “Any additional cost would be absolutely devastating.”