Maybe, just maybe, the thinking went, Novak Djokovic would be just a tad more susceptible to trouble this time around at the Australian Open.

After all, he tore an abdominal muscle in the third round and wasn’t sure he could continue to compete. Entering Sunday, Djokovic ceded five sets in the tournament, the most he ever dropped en route to a major final. And to top it all off, he was facing Daniil Medvedev, owner of a 20-match winning streak.

Yeah, right. We’re talking about Djokovic at Melbourne Park, where his dominance is most certainly intact — nine finals, nine championships. Plus, he’s still gaining on Roger Federer and Rafael Nadal in the Grand Slam standings, now up to 18 overall, two shy of the men’s record those rivals share.

Djokovic used improved serving, along with his usual relentless returning and baseline excellence to grab 11 of 13 games in one stretch and beat Medvedev 7-5, 6-2, 6-2 for a third consecutive Australian Open trophy.

“Definitely, emotionally, the most challenging Grand Slam that I ever had, with everything that was happening — injury, off-the-court stuff, quarantines,” Djokovic said. “A roller-coaster ride.” 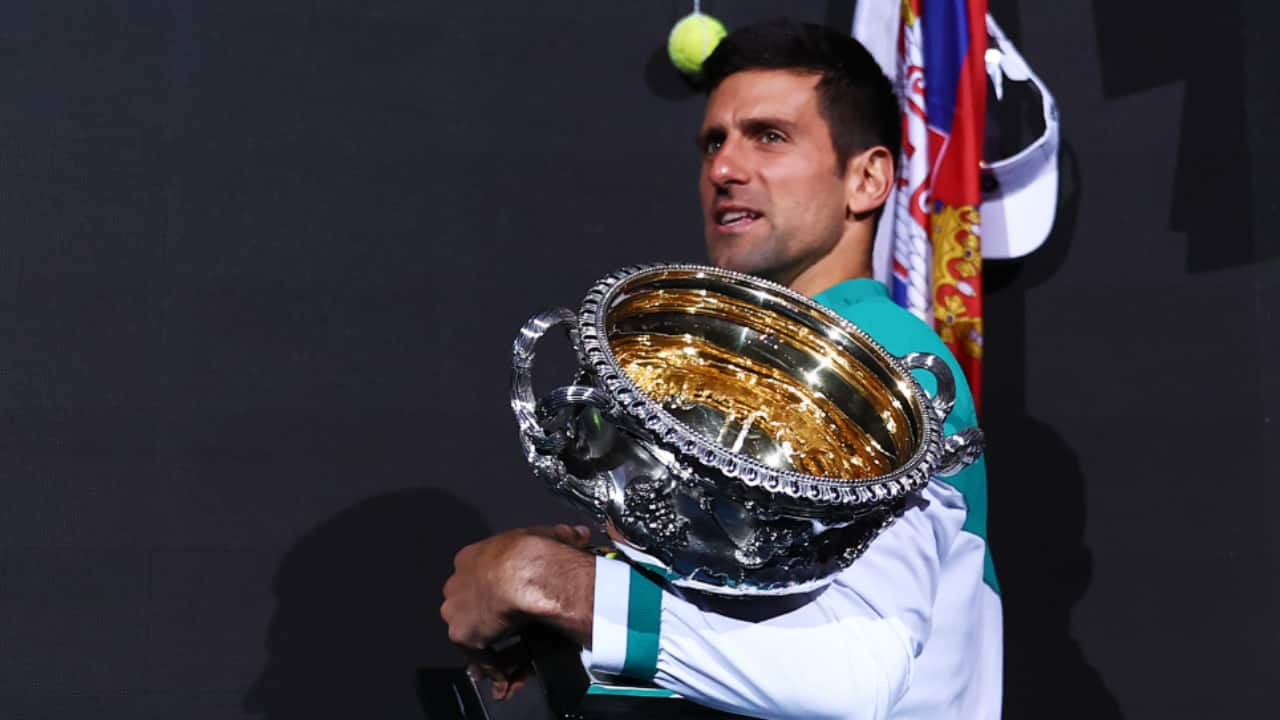 Novak Djokovic extended his Australian Open titles record with a 7-5, 6-2, 6-2 victory over Daniil Medvedev of Russia. 3:21

When the match ended after less than two hours, Djokovic went to the sideline, lifted his white shirt and peeled pieces of beige athletic tape from his stomach.

“I was quite worried,” Djokovic said about the injury. “I did not [think] realistically that I could actually play. I didn’t know until two hours before the fourth-round match.”

Dealing with what he called “bearable” pain, Djokovic improved to a combined 18-0 in semifinals and finals on Melbourne’s hard courts.

“Probably, it’s not your last one,” Medvedev said. “I have no words to say.”

Djokovic, a 33-year-old from Serbia, has won six of the last 10 majors and will stay at No. 1 in the rankings at least through March 8. That will give him 311 weeks there, breaking another mark held by Federer.

His goals now are squarely on Grand Slams, even more than before.

Put Djokovic’s nine triumphs in Australia alongside five at Wimbledon, three at the U.S. Open and one at the French Open. The math looks good for him: He is about a year younger than Nadal and 6 1/2 younger than Federer.

“I do enjoy the success every single time even more,” Djokovic said, “because I know that the longer the time passes, the more difficult it’s going to become.”

The No. 4-seeded Medvedev was appearing in his second Slam final; he was the runner-up to Nadal at the 2019 U.S. Open.

The 25-year-old from Russia had won 12 in a row against Top 10 opponents, but trying to solve Djokovic in Australia is a unique challenge.

“He’s really good [at] reading an opponent’s game,” Medvedev said, “knowing what you will do next, how to beat you.”

As things slipped away, Medvedev bounced his white racket off the blue court, then absolutely destroyed it with a full-on spike. He kept looking up at his coach with palms up as if to ask, “What can I possibly do here?”

It is a familiar sentiment in this stadium: Federer, Nadal, Andy Murray, Stan Wawrinka, Dominic Thiem — all Grand Slam champions, all defeated by Djokovic in semifinals or finals in Melbourne.

On a cool, cloudy evening, an event delayed three weeks because of the coronavirus pandemic closed with an announced attendance of 7,426 in Rod Laver Arena. Spectators were barred for five days earlier in the tournament because of a COVID-19 lockdown, but they eventually were let back in at 50 per cent capacity.

“There are a lot of mixed feelings about what has happened in the last month or so with tennis players coming to Australia,” Djokovic said. “But I think when we draw a line at the end, it was a successful tournament for the organizers.”

Medvedev’s flat, wrap-the-racket-around-his-neck forehand was iffy at first, missing wide, long and into the net in the initial 10 minutes. Djokovic grabbed 13 of the match’s initial 16 points and a quick 3-0 lead. Soon enough, though, it was 3-all, then 5-all.

But that’s when Djokovic stepped up, and Medvedev stepped back. Djokovic held at love, then broke to claim the set when Medvedev slapped a forehand into the net just after someone in the crowd called out during the point.

Djokovic began the second set with a fault into the net, then shook his left arm and flexed his shoulders. That point ended with him missing a backhand into the net, and he glared at his guest box. Another netted backhand gifted Medvedev a break.

Medvedev appeared to have a tiny opening at 4-2 in the third, getting to 15-30 on Djokovic’s serve with a forehand winner and waving to the crowd to make noise. As if viewing that as a personal affront, Djokovic took the next three points and the game, then pointed his right index finger to his temple and gritted his teeth.

Soon it was over.

“Coming to Australia, it always brings that extra dose of confidence to me,” Djokovic said, “because of my record here and because of how I play.”