Matthew Tkachuk and Sean Monahan had a goal and an assist each for Calgary (9-9-1), while Sam Bennett also scored.

Rasmus Andersson added two assists for the Flames, who came in desperate having lost four of five in regulation, and had been outscored a combined 14-3 in three consecutive defeats, including Saturday’s embarrassing 7-1 throttling by Connor McDavid’s Edmonton Oilers.

Michael Hutchinson stopped 30 shots in a surprise start for Toronto (14-4-2).

Both teams announced just before puck drop they would be minus their No. 1 goalies. Frederik Andersen sat out for the Leafs with a lower-body injury, while Jacob Markstrom, who was pulled in his last two starts, didn’t dress for the Flames because of an upper-body ailment.

Toronto, which was looking to secure its best start in franchise history through 20 games and entered play atop the North Division and NHL standings, hosts Calgary again Wednesday back at Scotiabank Arena. 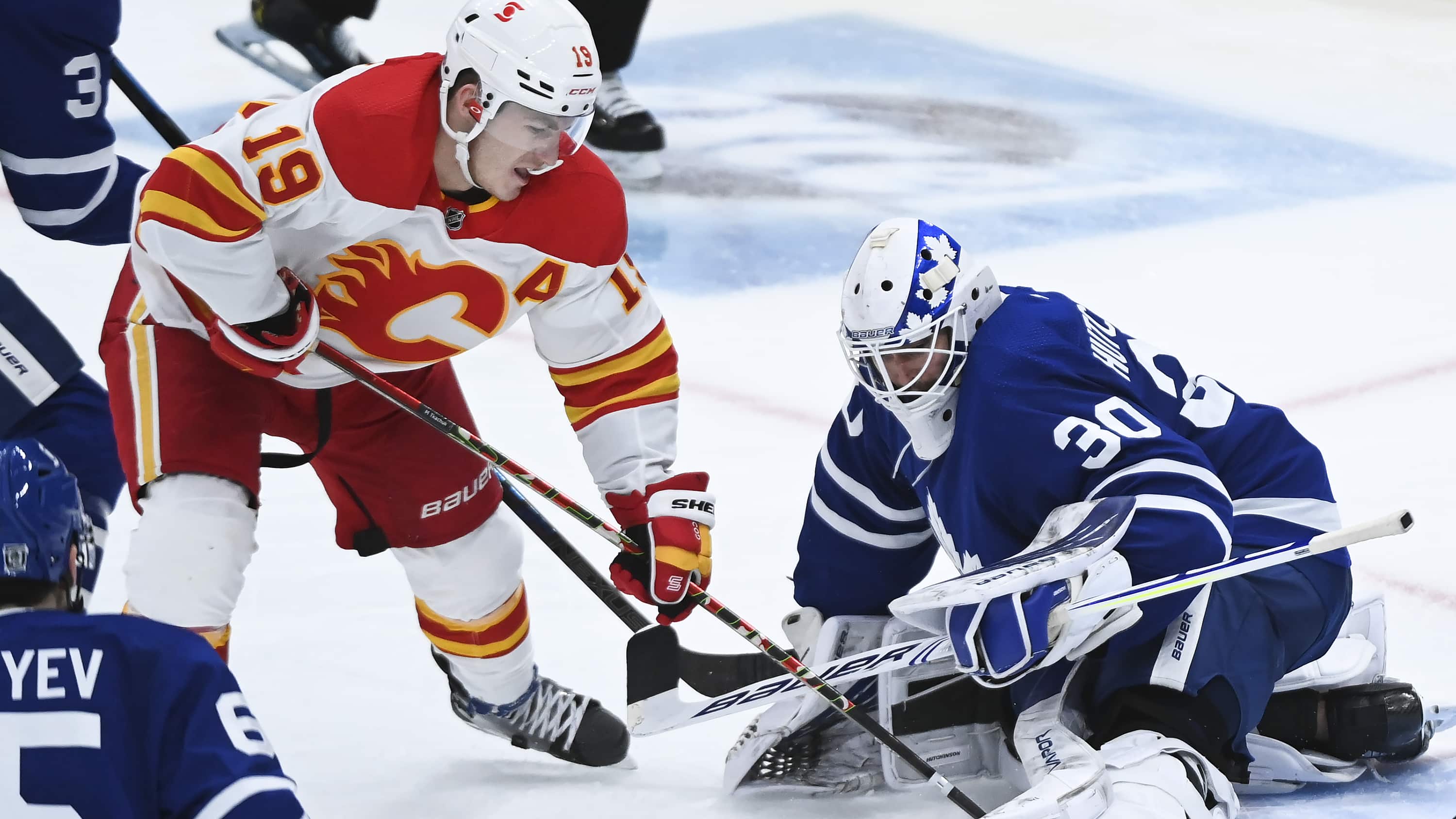 Matthews, who leads the NHL with 18 goals and was named the NHL’s first star of the week, saw his 16-game point streak come to an end — two short of the franchise record held by Darryl Sittler and Ed Olczyk.

Minus top-6 forwards Joe Thornton and Zach Hyman due to injury, Toronto head coach Sheldon Keefe loaded up his first line with the struggling John Tavares joining Matthews and Mitch Marner, but his team looked out of sorts from the get-go against an opponent embarking on a crucial stretch in the schedule.

Down 1-0 through 20 minutes, Toronto had three great chances to tie the game on the penalty kill in the second period, but Rittich stopped Ilya Mikheyev on two breakaways and Jason Spezza on a 2-on-1 rush.

Calgary eventually struck on the power play after Mikheyev’s second miss when Tkachuk tipped Mark Giordano’s point shot past Hutchinson at 9:28 for his sixth goal of the season and the 100th of his NHL career.

The Leafs, who came to life with a 5-on-3 power play in Saturday’s 5-3 victory in Montreal over the Canadiens, got a two-man advantage later in the period for 1:36, but weren’t able to get much through to Rittich.

Inserted into the lineup and onto Toronto’s second line because of the injury absences, Alexander Barabanov rattled Rittich’s crossbar early in the third.

But Monahan, who returned after two games on the shelf with a lower-body injury, banged home his third on a Calgary power play at 3:26 to make it 3-0.

The Leafs started to wake up after that as Keefe mixed up his lines, but it was too little too late for the home side as Rittich picked up the fourth shutout of his NHL career.

Matthews came in off back-to-back four-point performances and had a chance to become the first player in NHL history to open the scoring in five straight games, but Calgary went up 1-0 at 3:55 of the first when Andersson’s point shot hit the stick of Tavares before leaking through Hutchinson for Bennett to tap over the line for his third.

Toronto’s top-ranked power play got two opportunities in the period, with Morgan Rielly coming closest when his shot struck the crossbar before Rittich closed the door on a scramble at the side of his net.

The Flames goaltender had to be sharp again late in the first when he fired out a pad to deny Spezza.

One potential storyline heading into Monday that didn’t have a chance to materialize was a meeting of the minds between Tkachuk and Leafs defenceman Jake Muzzin, who sat out with a broken bone in his face. Muzzin gently flipped the puck at an opponent well-versed in the art of antagonism following the second of Toronto’s two victories in Calgary last month, which sent Tkachuk into a rage.