Deliveries of COVID-19 vaccine doses from two approved vaccine makers — Pfizer-BioNTech and Moderna — are back on track following weeks of reduced shipments, officials from the Public Health Agency of Canada said today.

Fortin said that both companies are on track to meet their targets by delivering a total of six million doses — four million from Pfizer and two million from Moderna — by the end of March.

And an updated delivery timeline released by PHAC says Canada should receive millions more doses than originally anticipated between now and September.

“We’re now coming out of this period of limited supplies. It’s an abundance of supplies for spring and summer, where we can have a significant scaling-up of immunization plans in provinces,” Fortin said.

The federal government has come under intense pressure from opposition politicians and other critics in recent weeks as the country’s vaccine rollout slowed. Pfizer began reducing shipments in January as it retooled its plant in Puurs, Belgium, so that it could expand its manufacturing capacity. Moderna also has cut its shipments in recent weeks.

The delays have caused Canada to fall behind dozens of other countries in measurements of doses administered by population, according to a global vaccine tracking database maintained by University of Oxford researchers.

As of last Saturday, only 2.7 per cent of Canadians had received one shot of a vaccine and less than one per cent had received both doses. 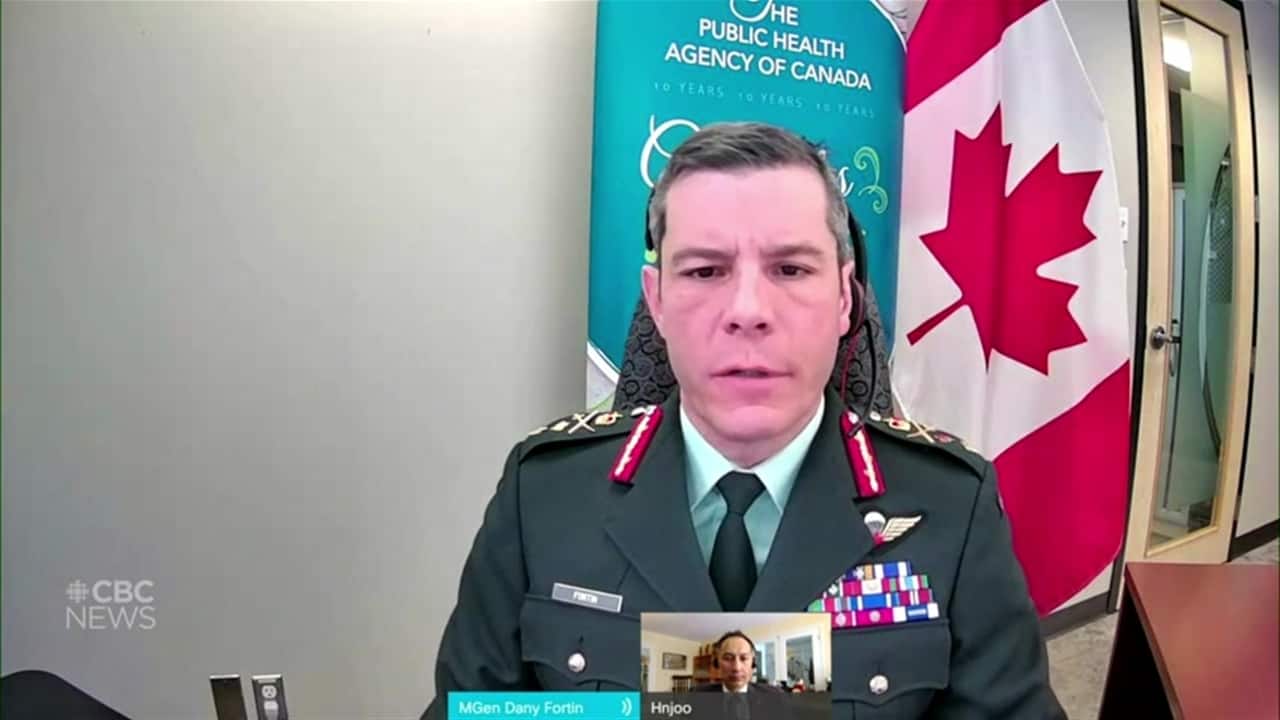 Maj.-Gen. Dany Fortin provides details on the increased supply of COVID-19 vaccines expected to arrive in Canada this spring. 1:48

Pfizer has locked in a delivery schedule for the next six weeks to meet the end-of-March deadline. The company plans to ship 475,000 doses next week and then 444,600 per week next month, according to the federal government’s vaccine distribution tracker.

Moderna, which has delivered 500,000 doses so far, will deliver a reduced shipment of 168,000 doses next week. Negotiations are still underway with Moderna on specific delivery dates for the remaining 1.3 million doses it’s committed to delivering by the end of March, but they are expected to arrive in two shipments, Fortin said.

The territories — which already have administered vaccines to 32.9 per cent of their adult populations — will have enough doses from Moderna’s next two deliveries to vaccinate 75 per cent of adults by the end of March, Fortin said.

Part of that increase is due to Health Canada acknowledging that each vial of the Pfizer vaccine carries six doses, not five. That change means more shots can be squeezed out of each vial — and the company can ship fewer vials and still meet its contractual obligations to send a certain number of doses to its customers.

Arianne Reza, assistant deputy minister at Public Services and Procurement Canada, said today that negotiations led the companies to commit to moving up the delivery of 5.1 million doses — scheduled originally to arrive in the third and fourth quarters of this year — to the second quarter between April and June.

The timeline shows that Canada could have enough doses to vaccinate even more people — 24.5 million — by the end of June. But that calculation is based on an optimistic scenario where three other vaccines currently under review — from AstraZeneca, Johnson & Johnson and Novavax — are approved by Health Canada and delivered on time.

Deputy Chief Public Health Officer Dr. Howard Njoo said preliminary data from provincial and territorial health authorities show that vaccinations in long-term care homes are starting to have a positive effect at preventing disease. He cautioned, however, that more robust data is needed as the vaccine rollout ramps up.

“The early indications are it’s starting to have an impact. The rates of infection and … subsequently the hospitalizations and deaths as a result of COVID-19 exposure and having the disease are starting to go down,” said Njoo.

He also said that federal and provincial health experts are looking at evidence that one shot of the Pfizer-BioNTech vaccine against COVID-19 might be almost as effective as two. Njoo said data presented by two Canadian doctors in the New England Journal of Medicine this week are compelling.

Dr. Danuta Skowronski from the British Columbia Centre for Disease Control and Dr. Gaston De Serres from the Institut national de sante publique du Quebec say data in the U.S. suggest the Pfizer vaccine was 92 per cent effective against COVID-19 two weeks after just one dose.

The doctors suggest that with vaccine doses in scarce supply, more of the most vulnerable could be protected by delaying second doses for now.

Njoo said the doctors recently presented their evidence to a committee of federal and provincial public health officers. He added that PHAC officials are actively discussing the issue with the provinces and territories and with members of the National Advisory Committee on Immunization, which makes recommendations on how vaccinations should be prioritized.