California officials are pinning their hopes on U.S. president-elect Joe Biden as they struggle to obtain coronavirus vaccines to curb a case surge that has packed hospitals and morgues.

Doses of COVID-19 vaccines have been arriving haphazardly as they make their way from the federal government through the state and finally to counties, cities and hospitals.

San Francisco’s public health department said it was likely to run out of vaccine on Thursday, in part because the state pulled back on administering a batch of Moderna shots after several health workers had a bad reaction.

The county health department received 12,000 doses last week but fewer than 2,000 doses this week, although local hospitals had their own supplies. But Mayor London Breed said she was “ready to celebrate” when Biden takes office on Wednesday, believing there will be more support.

Biden on Tuesday led a national memorial observance on the eve of his inauguration to honour the more than 400,000 Americans who have died in the raging global COVID-19 pandemic.

Los Angeles County, the country’s most populous with 10 million residents and a COVID-19 epicentre, had enough vaccine to “get through this week,” with an uncertain future supply, Dr. Barbara Ferrer, the county’s public health director, said Tuesday.

Yet, she went on: “Tomorrow, the new federal administration takes over, and we expect our situation to improve greatly.”

Faith in Biden’s promise to ramp up resources for vaccinations comes as California faces an unprecedented demand for mass vaccinations that shows no immediate sign of easing, although there are hopeful indicators that a much-feared surge-atop-a-surge from unsafe New Year’s Eve gatherings won’t be as bad as previously estimated.

Only a couple of weeks ago, it was feared some hospitals in Los Angeles and other hard-hit areas might have to begin rationing care as they ran out of surge capacity that was tapped when regular beds were filled.

But statewide hospitalizations are down 8.5 per cent over 14 days, with the number of intensive care patients also easing. Hospitals that had been seeing 3,500 new patients each day are now seeing 2,500 to 2,900 daily admissions — still distressingly high, but “quite a significant reduction,” state Health and Human Services Secretary Dr. Mark Ghaly said.

The statewide positivity for the virus fell below 10 per cent for the first time in weeks, and each infected individual is now infecting less than one other person — a recipe for an eventual decline in cases.

“These are rays of hope shining through,” said Ghaly, who also said he’s hoping things improve with the new Biden administration.

Even so, California this week surpassed three million COVID-19 cases since the pandemic began last January. Nearly 34,000 people have died, including more than 6,700 people in the last two weeks.

California officials, as everywhere throughout the country, are pinning their hopes on mass inoculations to provide “herd immunity” to populations and finally beat the virus, allowing them to reopen an economy battered by stay-at-home safety measures.

So far 3.2 million doses have been shipped to California and 1.5 million have been administered, Ghaly said.

The delay may be because some of the remaining doses have not actually arrived in the state yet, and some have been earmarked for those needing second doses or for the mass vaccination sites, he said.

Even with the lagging supply, California in the last week greatly expanded both the number of people cleared to get a vaccine and its capacity for administering shots. Last week, Gov. Gavin Newsom announced people 65 and older would be eligible for shots, which until then were mainly confined to health-care workers and vulnerable seniors in nursing care.

Ontario and Quebec, which recently imposed tougher measures aimed at slowing the spread of the novel virus, saw decreases in new numbers on Tuesday, with 1,386 new COVID-19 cases in Quebec and 1,913 in Ontario (although health officials cautioned that a technical issue in Toronto likely caused an undercount of cases). But even with lower numbers, hospital capacity remained a concern in both provinces.

Public health officials in New Brunswick, meanwhile, reported 31 new cases of COVID-19 on Tuesday and one additional death from the disease.

“We have never been in a situation like this since pandemic began,” Premier Blaine Higgs said Tuesday. “I cannot stress enough that this is a critical moment…. Stay home as much as you possibly can and avoid interacting with people outside your household bubble.”

Chief Medical Officer of Health Dr. Jennifer Russell said the death of a person in their 80s at the Parkland Saint John long-term care facility brings to 13 the number of COVID-19-related deaths in the province.

As of midnight Tuesday, the Moncton, Saint John and Fredericton regions were set to join the Edmundston region at the red level of the province’s COVID recovery plan.

Here’s a look at what else is happening with COVID-19 across the country:

Vaccine distribution remained a concern in several provinces as supplies ran low and federal officials worked to answer questions about when new doses would arrive. Canada won’t be getting any Pfizer-BioNTech coronavirus vaccines next week and 50 per cent fewer than expected over the next month, officials said Tuesday, prompting the leader of Canada’s most populous province to ask U.S. president-elect Joe Biden to share a million doses from Pfizer’s Michigan plant.

Maj.-Gen. Dany Fortin, who is leading Canada’s logistical rollout and distribution of vaccines, called it a major reduction, but said Pfizer is still expected to meet its contractual obligation to ship four million doses to Canada by the end of March.

U.S. pharmaceutical company Pfizer confirmed last week it would temporarily reduce deliveries to Europe and Canada of its COVID-19 vaccine while it upgrades production capacity at its plant in Puurs, Belgium. Pfizer’s Belgian plant supplies all shots delivered outside the U.S.

“Our American friends, help us out,” Ford said. “You have a new president, no more excuses. Help us out.”

-From CBC News, The Canadian Press and The Associated Press, last updated at 7:35 a.m. ET

WATCH | ‘The world was not prepared,’ says WHO interim pandemic report: 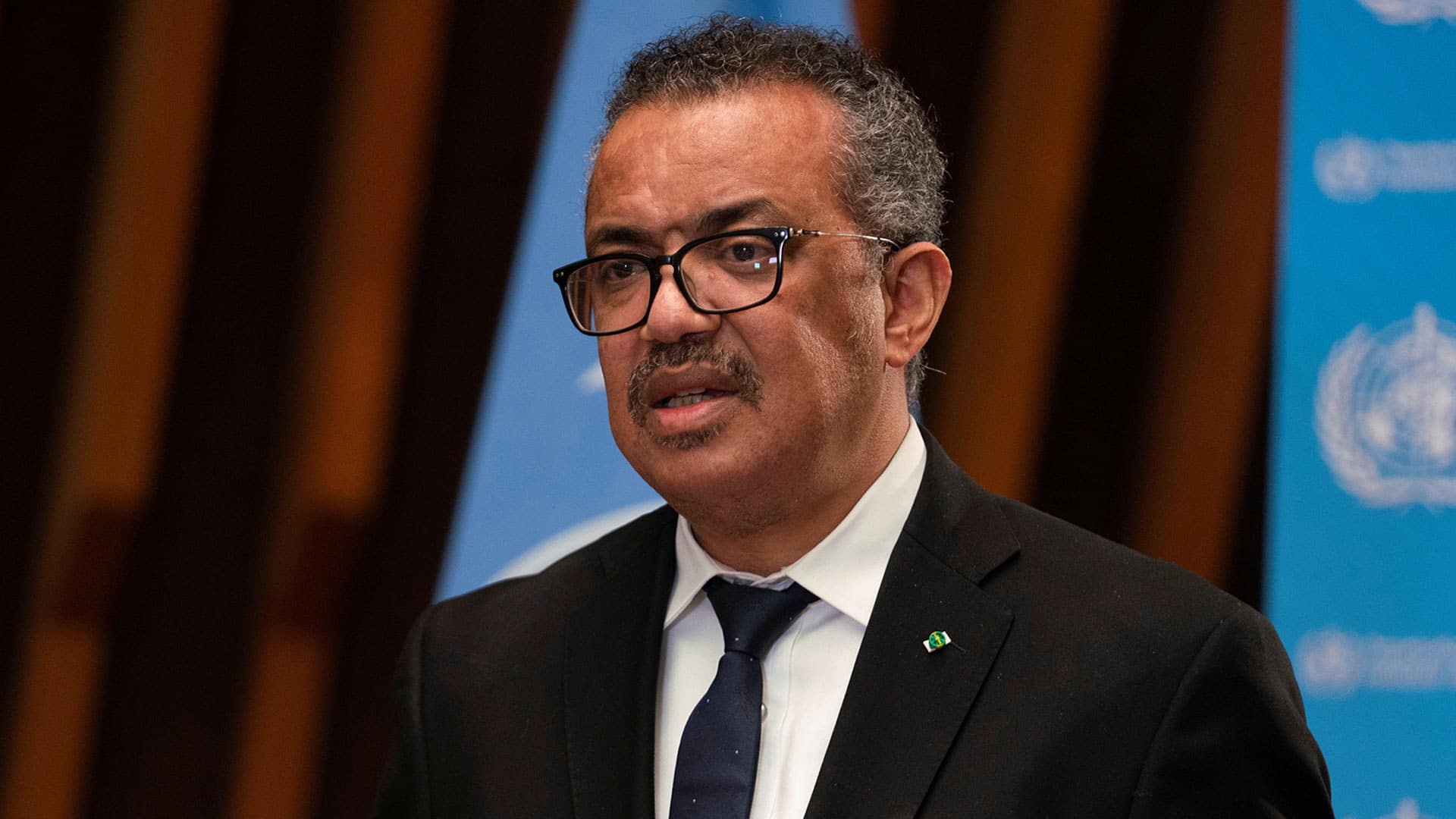 As the coronavirus pandemic continues to ravage the world, the World Health Organization released an interim report on lessons learned. And it’s not flattering toward the WHO itself, China or even Canada. 2:00

As of early Wednesday morning, more than 96.2 million cases of COVID-19 had been reported worldwide, with more than 53.1 million of those considered recovered or resolved, according to a database maintained by Johns Hopkins University. The global death toll stood at more than two million.

The COVID-19 vaccine developed by Pfizer and BioNTech is likely to protect against a more infectious variant of the virus discovered in Britain that has spread around the world, according to results of further lab tests released on Wednesday.

The encouraging results from an analysis of blood of participants in trials are based on more extensive analysis than those released by the U.S. drugmaker last week. But the virus needs to be continuously monitored for changes, the study said.

The latest study, posted on bioRxiv.org but not yet peer reviewed, was conducted on a synthetic virus with 10 mutations that are characteristic of the variant known as B117 identified in Britain.

Among the 11 authors of the study are Ugur Sahin and Oezlem Tuereci, co-founders of BioNTech. Sahin is chief executive and his wife, Tuereci, is chief medical officer.

For the test, blood samples drawn from 16 vaccinated participants in prior clinical trials were exposed to a synthetic virus called pseudovirus that was engineered to have the same surface proteins as B117, as characterized by 10 hallmark mutations.

The antibodies in the blood of the volunteers given the vaccine, known as Comirnaty, or BNT162b2, neutralized the pseudovirus as effectively as the older coronavirus version that the product was initially designed for.

The program was launched last Thursday, starting with health workers and then including the elderly. More than 600,000 people were vaccinated in the first two days but the pace has slowed since then to around 100,000 people per day.

In the Asia-Pacific region, China’s capital Beijing said it will investigate all individuals who entered the city from abroad from Dec. 10 and shut down a subway station after reporting the biggest daily jump in new COVID-19 cases in more than three weeks.

India will start exporting vaccines from Wednesday, paving the way for many mid- and lower-income countries to get supplies of the easy-to-store Oxford-AstraZeneca drug.

In the Middle East, Kuwait has registered its first cases of a more contagious coronavirus variant in two Kuwaiti women who had been in Britain.

In Africa, Nigeria will seek to procure vaccines that are less dependent on cooling facilities, as more than 2,600 Nigerian physicians have contracted COVID-19 and dozens have died.

In the Americas, Mexico aims to administer 7.4 million doses of Sputnik V, a Russian-developed COVID-19 vaccine, to its people by the end of March, part of the country’s scramble to secure as much supply as quickly as possible.

The timeline has closed for Venezuela to join the COVAX facility for COVID-19 vaccines, an official with the Pan American Health Organization said, though the country was still negotiating for doses through other means.

In Europe, German Chancellor Angela Merkel warned Germany may need to consider border crossing curbs if other European countries do not act to halt the spread of the coronavirus, particularly its new, more transmissible variants.

The spread of the coronavirus in France could sharply accelerate in the coming months due to the emergence of a more contagious variant, two Paris hospital executives said on Wednesday, raising fears of a third lockdown in the country.

Karine Lacombe, head of infectious diseases at Paris’s Saint Antoine hospital, and Martin Hirsch, director general of the Paris hospitals system, both warned of the extra strain this could put on health-care infrastructure.

-From Reuters and The Associated Press, last updated at 9:40 a.m. ET