While Ontario and Quebec, Canada’s two most-populous provinces, have seen surging COVID-19 case counts for the past several weeks, Western provinces are now also reporting their own record-breaking numbers tied to the spread of the coronavirus.

Saskatchewan reported 66 new cases of COVID-19 Monday, its highest-ever single-day increase. With 398 COVID-19 cases in the province that are considered active, it also marked the third day in a row the province has set a new record high for active cases.

The Saskatoon zone made up the majority of the new cases with 25. A government release said Saskatoon’s cases are primarily linked with outbreaks at bars or nightclubs and that more cases are expected to be reported in coming days.

Meanwhile, more than 86 cases of COVID-19 have now been traced to a superspreading event at the Prince Albert gospel centre. The release said contact tracing for that event has reached an estimated 450 people.

Alberta also saw a record high in active cases on Monday, with 3,138 reported. The previous record of 3,022 goes all the way back to April 30 at the peak of the first wave.

The province reported 898 new cases over the weekend and four more deaths, including a man in his 20s from the Central zone. 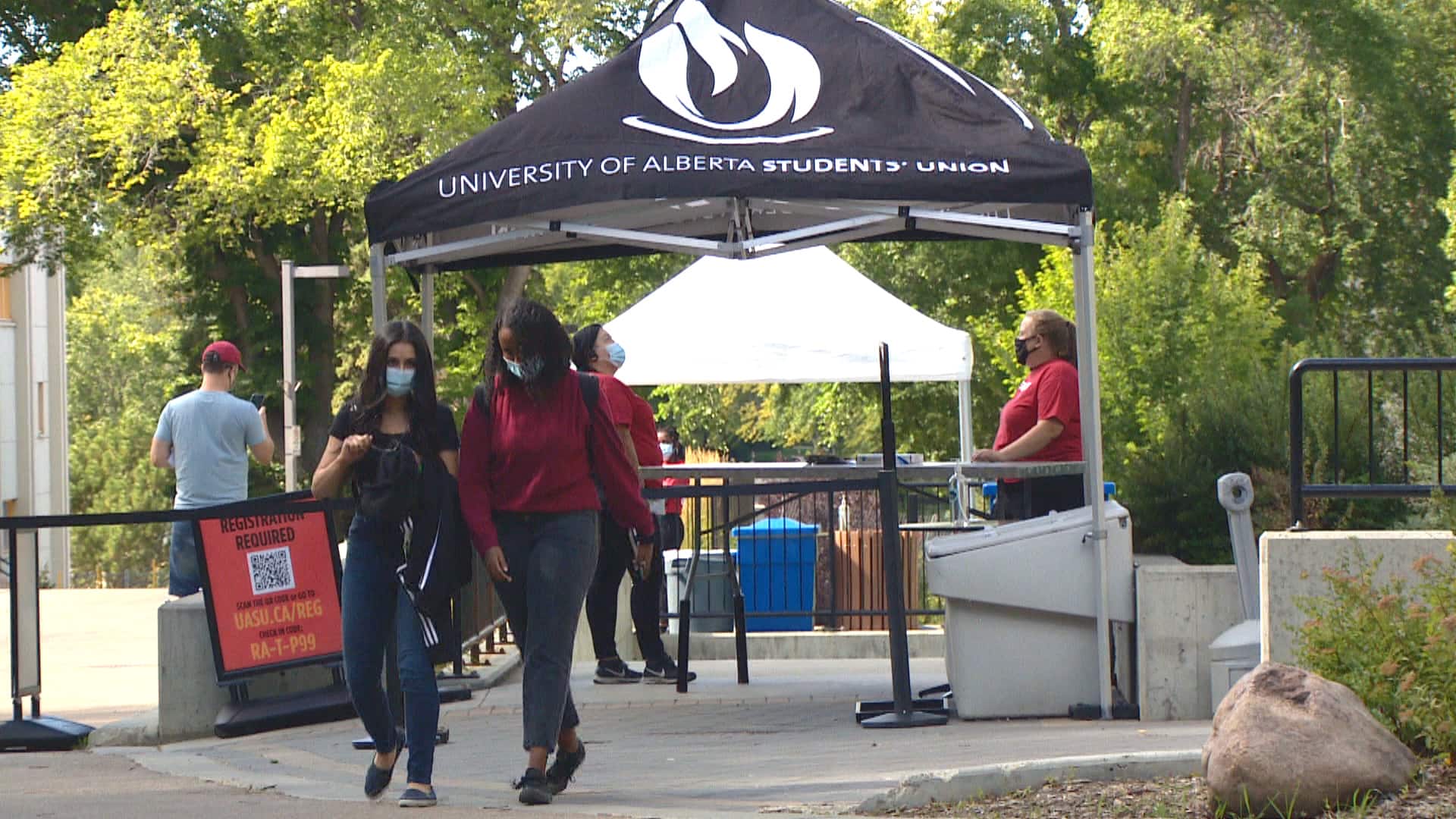 COVID-19 cases are rising in Alberta, and officials say difficulties with contact tracing could hamper the province’s ability to slow the spread. 3:49

In addition, aggressive contact tracing is underway after at least 49 active cases of COVID-19 were linked to a wedding held earlier this month in Calgary.

In British Columbia, Provincial Health Officer Dr. Bonnie Henry said Monday that B.C. is in the second wave of the coronavirus pandemic.

The province reported 499 new cases of COVID-19 and two more deaths over the weekend, with the number of active cases now totalling 1,639. 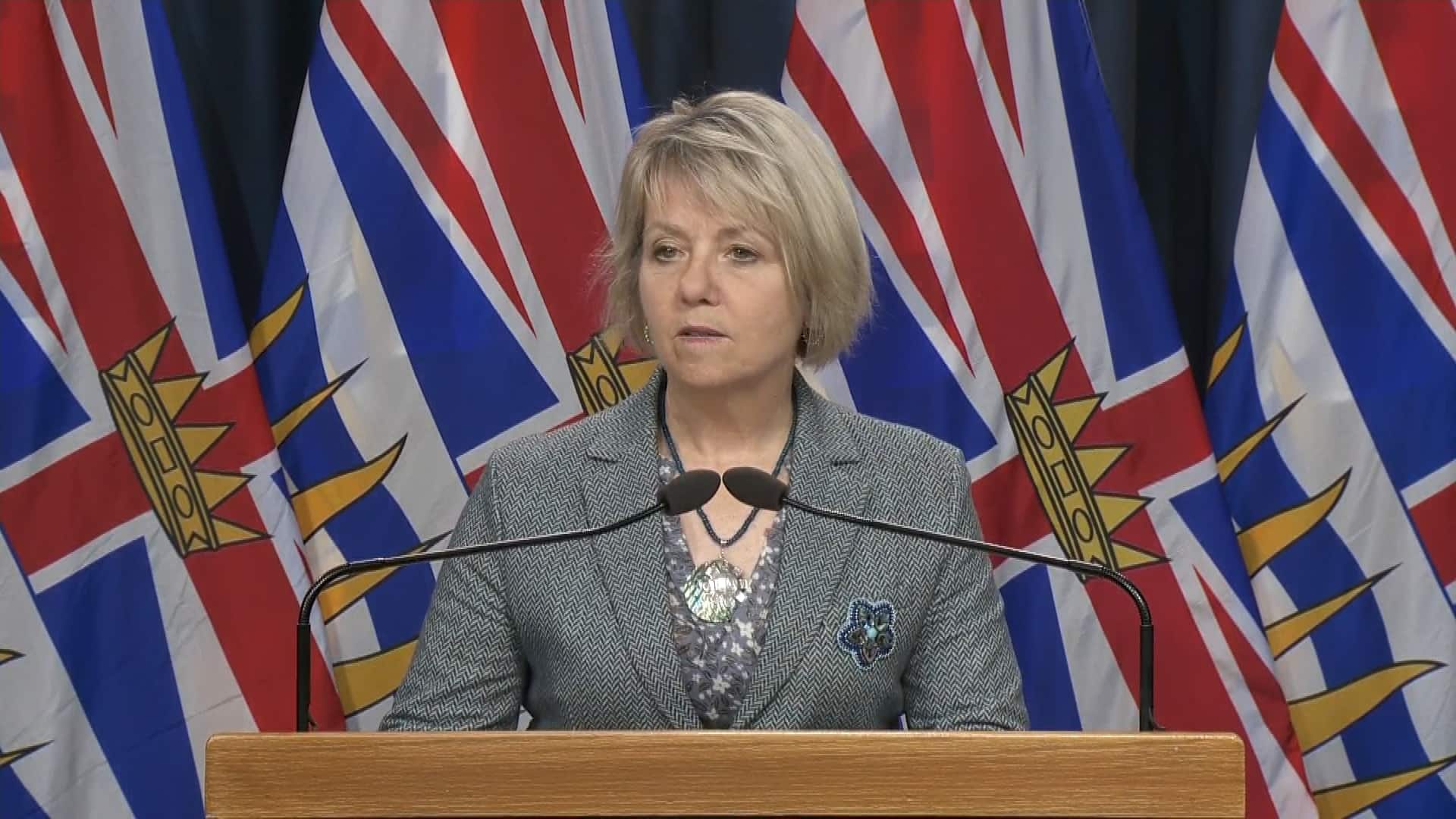 Despite a second wave, Dr. Bonnie Henry says the province is still not seeing an exponential growth in cases. 1:58

Despite the increase in cases, Henry was quick to point out that the province is not seeing “exponential growth” and the health-care system is not yet overwhelmed, though she urged continued vigilance from all residents.

“It is possible that we could go into one of those rapidly increasing curves or waves,” she said. “We are in a tricky place right now.”

As of 7:30 a.m. ET on Tuesday, Canada had 201,435 confirmed or presumptive coronavirus cases. Provinces and territories listed 169,671 of those as recovered or resolved. A CBC News tally of deaths based on provincial reports, regional health information and CBC’s reporting stood at 9,778.

Newfoundland and Labrador’s travel ban faces further challenge from the Canadian Civil Liberties Association, which is appealing a decision by the province’s Supreme Court to uphold the ban that was introduced this spring to restrict the spread of the coronavirus.

Michael Bryant, executive director of the CCLA, said the organization decided to file the appeal by Monday’s deadline because it doesn’t agree with a ruling that provinces or territories have the right to exclude a Canadian from entry.

In Quebec, health-care workers blocked sections of the Jacques-Cartier Bridge in Montreal and the Quebec Bridge in Quebec City for a brief period on Monday calling for better working conditions.

Members of the Fédération interprofessionnelle de la santé du Québec, the largest nurses’ union in the province, say the pandemic is putting a strain on the health-care system.

In Ontario, only five per cent of the province’s coronavirus cases have used the national COVID Alert app — which allows users to report a positive coronavirus test and alert others of a potential exposure — to report their infections, figures provided by the provincial government show.

Despite the limited uptake, public health experts say the app is still a useful tool and is just one of many measures aimed at slowing the virus’s spread. 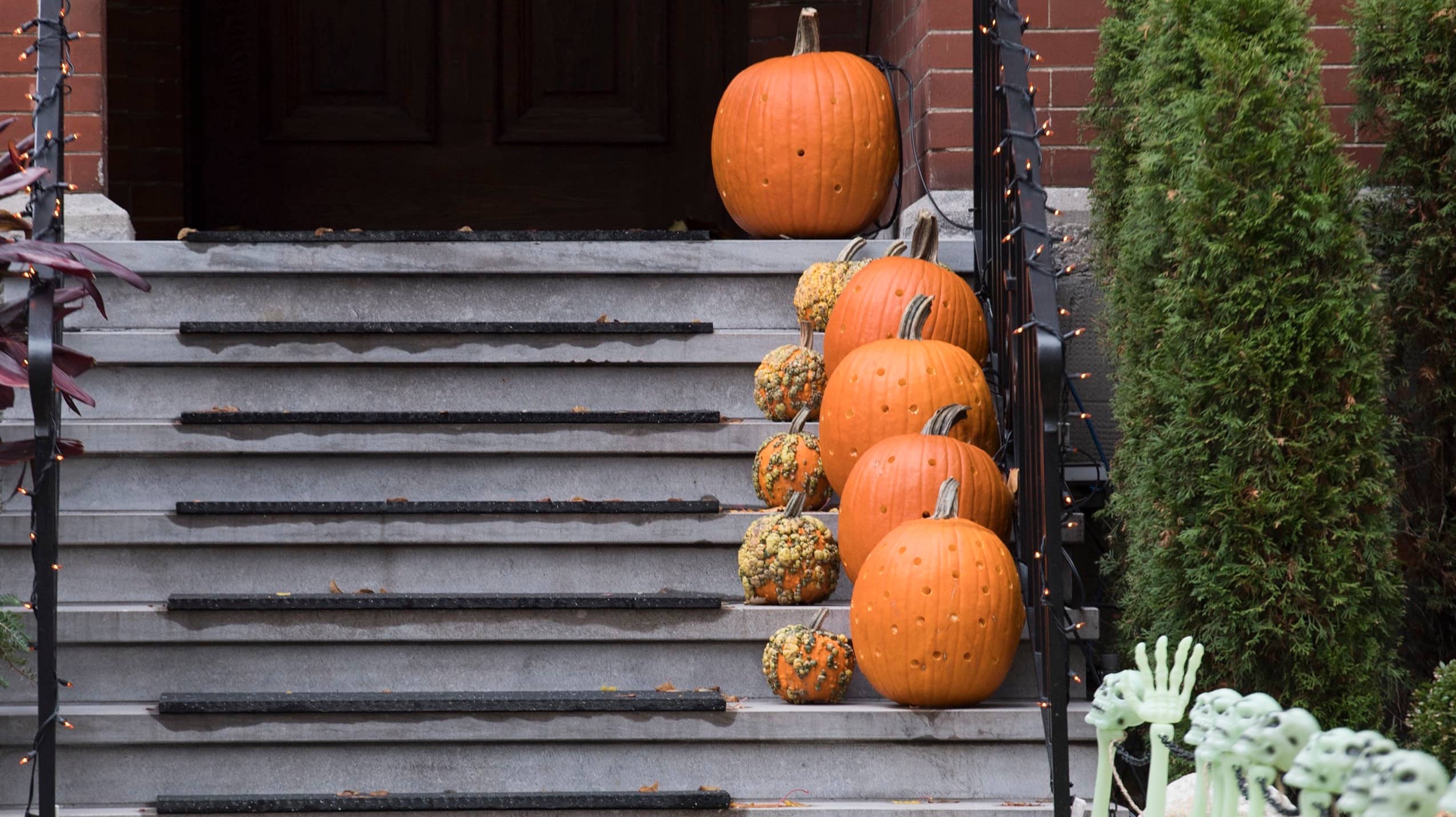 Halloween parties are not acceptable this year but trick-or-treating can be done safely, says infectious disease specialist Dr. Isaac Bogoch, who adds that he and his children will be following their local public health guidelines. 4:29

Manitoba has reversed a decision to close beverage rooms, which are bars within licensed hotels, for two weeks as part of tougher new pandemic restrictions that took effect in the Winnipeg area Monday.

Hotel owners had complained, stating they were being unfairly targeted while licensed restaurants and lounges were able to remain open for the two-week period, albeit at half capacity. 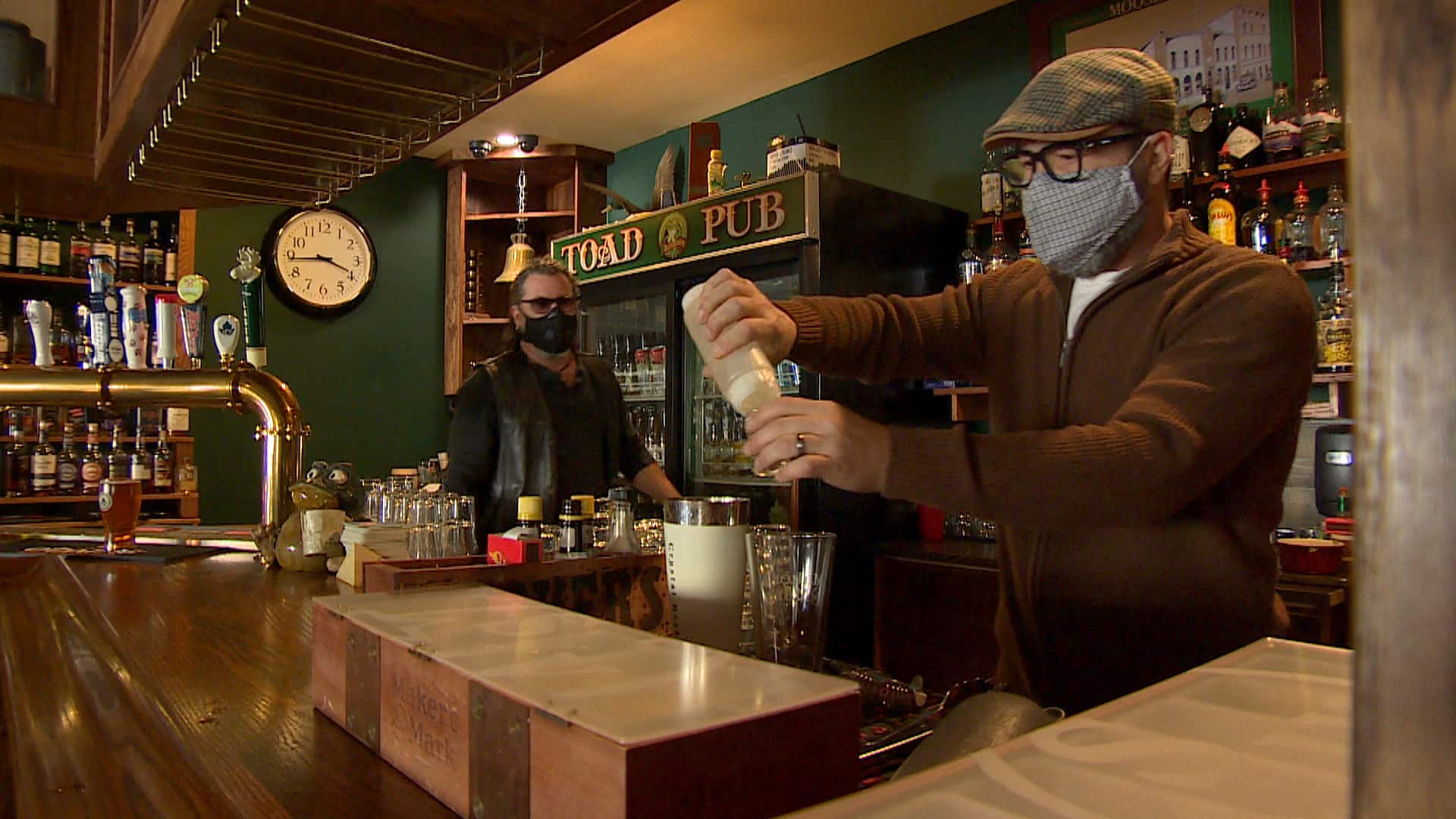 Many businesses in the Winnipeg area are preparing to close or significantly reduce their capacity for at least two weeks as the province tries to prevent a further increase in COVID-19 cases. 1:44

In Yukon, the territory’s government has announced $2.88 million in new funding to help save hotels and rental cabins from bankruptcy this winter, giving business owners up to $400 per room each month until 2021.

Visits to Yukon by road and air have declined more than 90 per cent during the COVID-19 pandemic.

Northwest Territories hosted a fiscal update on Monday in which the finance department said the territory lost approximately 4,000 jobs this year due to COVID-19, mostly in the service sector.

But the size of the government sector acted as an economic stabilizer, and jobs are expected to return to nearly 90 per cent of their pre-pandemic level by the end of the year.

According to Johns Hopkins University in Baltimore, the global total of confirmed coronavirus cases stands at more than 40.4 million. More than 1.1 million people have died, while more than 27.7 million have recovered.

In the Americas, U.S. President Donald Trump said on Monday he would test for the coronavirus before the next presidential debate with Democratic candidate Joe Biden this week. His comments came on the same day he called top infectious-disease scientists “idiots” as polls showed him trailing Biden across key battleground states.

In Mexico, the mayor of the country’s capital warned tighter coronavirus curbs could be imposed later in the week as COVID-19 hospitalizations rise in the metropolis of some nine million people.

In Europe, U.K. researchers said on Tuesday they are preparing to begin a controversial experiment that will infect healthy volunteers with coronavirus to study the disease in hopes of speeding up the development of a vaccine. The government is set to invest 33.6 million pounds ($57.3 million Cdn) in the challenge study, which is being conducted by Imperial College London among others.

Portugal’s Prime Minister Antonio Costa is backing down from his plan to make the government’s Stayaway COVID-19 tracing app mandatory, saying that the widely contested move, which was due to be voted on later this week in parliament, required further debate.

In Middle East-Africa, the family of senior Palestinian official Saeb Erekat said he remained in critical but stable condition and was receiving artificial respiration in an Israeli hospital Tuesday after contracting the coronavirus. Erekat, 65, has been one of the Palestinians’ most recognizable faces over the past several decades, serving as a senior negotiator in talks with Israel.

In Asia-Pacific, a cabinet minister said Pakistan has witnessed a 140 per cent increase in fatalities from COVID-19 in recent weeks due to widespread violations of physical distancing rules. His comments Tuesday came shortly after the military-backed Command and Operations Center reported 14 deaths and 625 new cases in the past 24 hours.

India has added over 46,000 cases of coronavirus infection and 587 deaths in the past 24 hours. Prime Minister Narendra Modi said Monday that India is strategizing to immunize its population by using a digital health plan, under which each person gets an identity card containing all health-related information.

A number of fishing crew who flew into New Zealand on chartered planes have the coronavirus, with health officials saying Tuesday that 11 have tested positive so far and another 14 cases are being investigated. The news could deal a blow to New Zealand’s efforts to restart its fishing industry, which has struggled to find local workers to crew vessels.

Have a coronavirus question or news tip for CBC News? Email us at Covid@cbc.ca