Drug maker Johnson & Johnson says it will be able to provide 20 million doses of its single-shot COVID-19 vaccine to the U.S. government by the end of March, assuming it gets the green light from federal regulators.

J&J disclosed the figure ahead of a Congressional hearing on Tuesday looking at the country’s vaccine supply. White House officials cautioned last week that initial supplies of J&J’s vaccine would be limited.

The company reiterated that it will have capacity to provide 100 million vaccine doses to the U.S. by the end of June. That supply will help government officials reach the goal of having enough injections to vaccinate most adult Americans later this year. On a global scale, the company aims to produce one billion doses this year.

U.S. health regulators are still reviewing the safety and effectiveness of the shot and a decision to allow its emergency use is expected later this week. J&J’s vaccine would be the first in the U.S. that requires only a single shot.

Canada has an agreement with J&J for up to 38 million doses of its vaccine, pending approval from Health Canada. 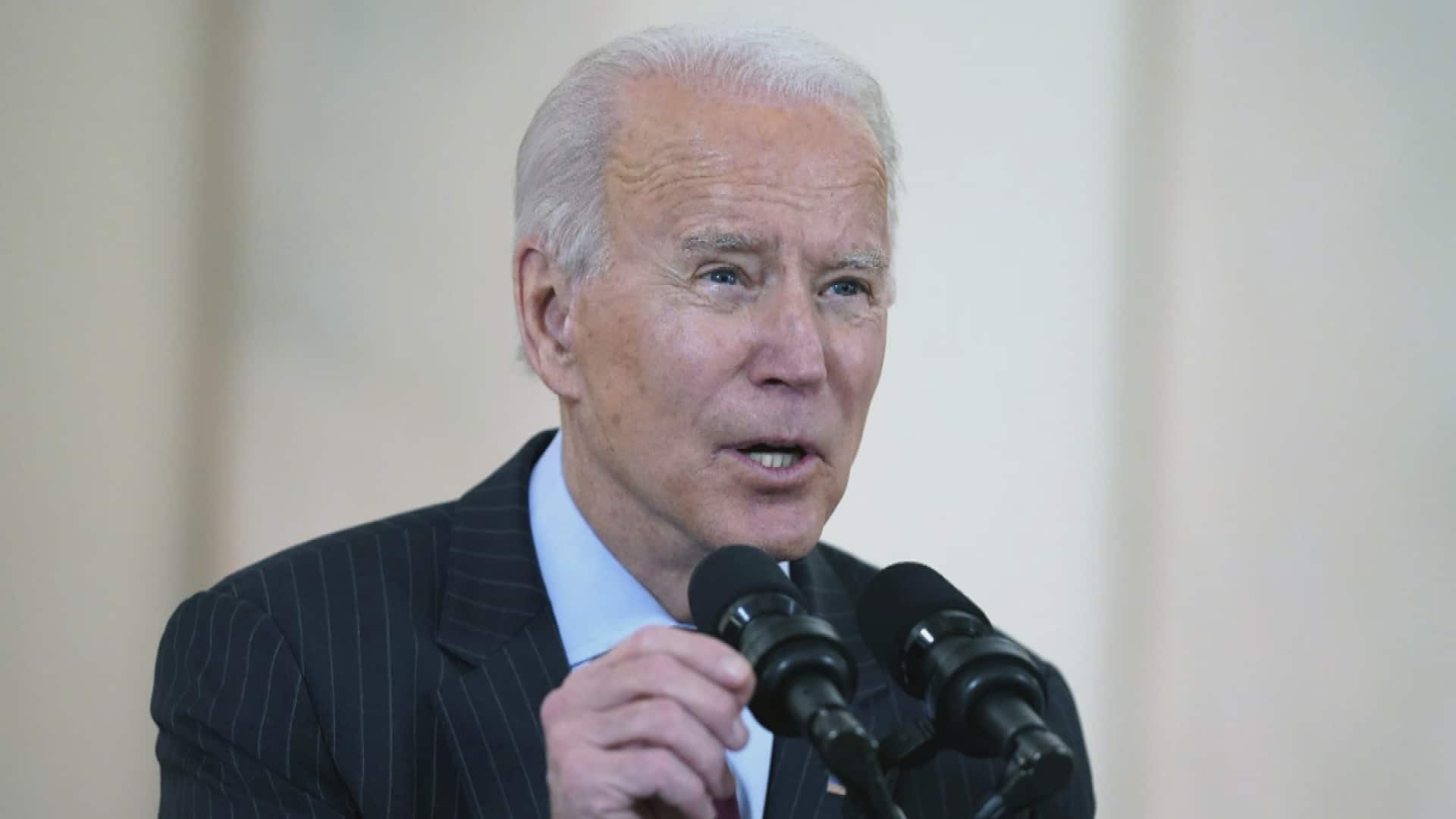 U.S. President Joe Biden said the coronavirus doesn’t discriminate between Democrats and Republicans during a televised address ahead of a candle-lighting ceremony honouring the 500,000 people who have died as a result of COVID-19, the disease caused by the virus. 1:42

The U.S. has seen more recorded cases of COVID-19 than any other nation in the world, with more than 28.1 million recorded cases. President Joe Biden on Monday described the death toll, which surpassed 500,000, as a “truly grim, heartbreaking milestone.”

Biden urged Americans to resist becoming “numb to the sorrow” and “viewing each life as a statistic.” The people lost were “extraordinary,” the president said, noting that “to heal, we must remember.”

-From The Associated Press and CBC News, last updated at 7 a.m. ET

The growing threat from COVID-19 variants has prompted the Manitoba government to tighten some of its pandemic-control guidelines. Instead of 15 minutes, people will be considered contacts of a case — and be required to undergo testing and self-isolation — if they have been in close range of an infection for 10 minutes.

The province, which has to date identified four travel-related cases of the B117 variant, is also ending an exemption that allowed some household members of a positive case to avoid self-isolation. Going forward, everyone in the same home as a positive case will have to self-isolate and get tested.

In Atlantic Canada, Newfoundland and Labrador reported 14 new cases of COVID-19 on Monday, including one in the Labrador-Grenfell Health Region. As of Monday, the province had 407 active cases and five COVID-19 patients in hospital.

“I am cautiously optimistic that we are making progress but we are by no means out of the woods,” said Chief Medical Officer of Health Dr. Janice Fitzgerald.

Health officials in both Nova Scotia and New Brunswick reported one new case of COVID-19 on Monday, and there were no new cases reported in Prince Edward Island.

In Quebec, health officials reported 805 new cases of COVID-19 on Monday and 11 more deaths attributed to the novel coronavirus. Hospitalizations rose by three, to 689, and 117 people were in intensive care, a drop of two. 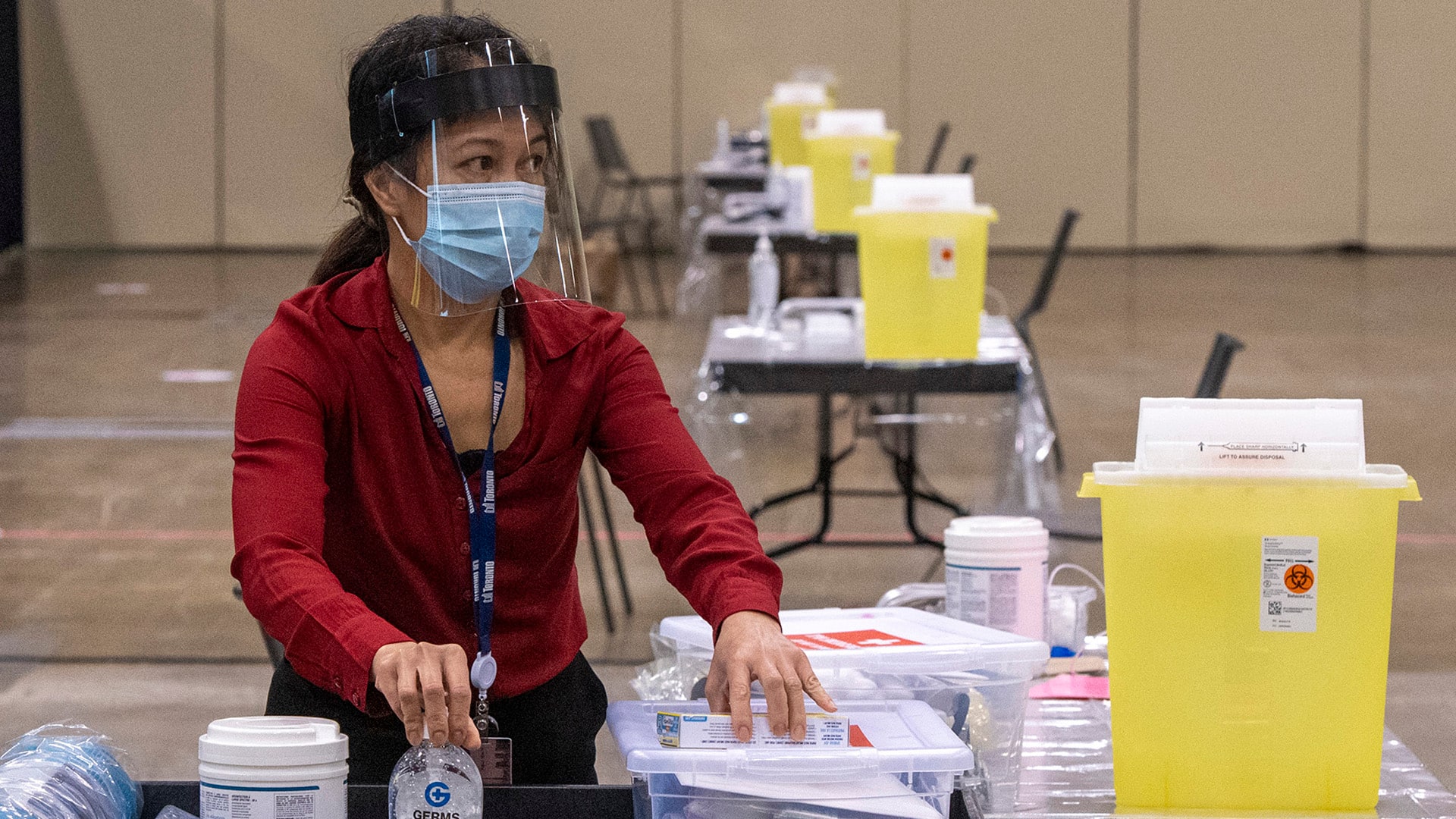 Infectious disease specialist and member of Ontario’s vaccine distribution task force Dr. Isaac Bogoch talks about Ontario’s plan to have a regional approach to the COVID-19 vaccine rollout and how the province will help those over 80 get access to the vaccine. 2:00

In British Columbia, health officials reported 1,428 new COVID-19 cases over the past three days, for a total of 77,263 since the pandemic began. There have also been eight more deaths, bringing the number of fatalities linked to the novel coronavirus to 1,335 in B.C.

-From The Canadian Press and CBC News, last updated at 7:15

As of early Tuesday morning, more than 111.7 million cases of COVID-19 had been reported worldwide, with more than 63 million of those cases listed as resolved on a tracking site maintained by Johns Hopkins University. The global death toll stood at more than 2.4 million — with more than 500,000 of those deaths in the U.S. alone.

In Europe, new COVID-19 regulations took effect Tuesday in Poland that lift quarantine requirements for people entering the country who have certificates of having been inoculated against the virus with a European Union-approved vaccine.

Also, kindergarten children, elementary pupils and persons taking care of them, as well as researchers studying in Poland or in a neighbouring country, are exempt from the 10-day quarantine. The government regulations published Monday night also allow people to visit health spas if they test negative no more than six days before arrival.

The U.K. unemployment rate rose for a sixth straight month in December as renewed coronavirus restrictions shut down most businesses across the country. The Office for National Statistics said Tuesday that unemployment rose to 5.1 per cent in December, up 0.1 per cent from the previous month and 1.3 per cent from a year earlier. The number of people on company payrolls has dropped by 726,000 since the pandemic began last February, with 58.5 per cent of the decline coming among people under 25.

The figures don’t show the full impact of COVID-19 restrictions on employment because some 1.9 million workers remain on furlough. A government program covers 80 per cent of their wages.

Prime Minister Boris Johnson on Monday announced plans to slowly end a national lockdown in England in hopes of safely reopening the economy and social life as infection rates drop and widespread vaccinations reduce the threat from COVID-19.

In the Asia-Pacific region, the Philippine president will reject recommendations to further ease coronavirus quarantine restrictions until a delayed vaccination campaign kicks off, his spokesperson said.

President Rodrigo Duterte also rejected a plan to resume face-to-face school classes in some pilot areas until vaccinations, which have been set back by delays in the arrival of initial batches of COVID-19 vaccine, have been launched, presidential spokesperson Harry Roque said.

The scheduled delivery on Tuesday of 600,000 doses from Sinovac Biotech Ltd. was postponed anew after the China-based company failed to immediately secure an emergency-use permit from Manila’s Food and Drug Administration. Sinovac got the authorization Monday.

Top economic officials have asked Duterte to consider further easing quarantine restrictions starting in March to bolster the economy, which has suffered one of the worst recessions in the region, and stave off hunger. But Duterte rejected the recommendations.

“The chief executive recognizes the importance of re-opening the economy and its impact on people’s livelihoods,” Roque said, but noted that the president “gives higher premium to public health and safety.”

The Philippines has reported more than 563,000 confirmed cases and more than 12,000 deaths, the second-highest in Southeast Asia.

In the Americas, Mexico has received its first shipment of Russia’s Sputnik V COVID-19 vaccine.

Some 200,000 doses arrived to Mexico City’s international airport late Monday night aboard a British Airways flight from Moscow. Officials plan to use the doses to begin vaccinating seniors in the capital’s most marginalized boroughs on Wednesday.

In the Middle East, Oman will not allow people from 10 countries to enter the country for 15 days to curb the spread of the coronavirus, in particular certain mutated strains.

In Africa, two of South Africa’s prime commercial property owners said this week they will extend rental relief to struggling tenants this year. South Africa is the hardest-hit country on the continent, with more than 1.5 million reported cases of COVID-19 and more than 49,000 deaths.