French doctors expressed relief but business owners were in despair as France prepared Thursday to shut down again for a month to try to put the brakes on a fast-moving fall outbreak.

The new lockdown is gentler than what France saw in the spring, but still a shock to restaurants and other non-essential businesses that have been ordered to close their doors in one of the world’s biggest economies. French schools will stay open this time, to reduce learning gaps and allow parents to keep working. Farmers markets, parks and factories can also continue operating, officials said.

French lawmakers are voting Thursday on the new restrictions announced by President Emmanuel Macron, which are set to come into effect at midnight. The lower house of parliament is dominated by Macron’s centrist party, so approval is virtually guaranteed. The prime minister will lay out details of the virus-fighting plan Thursday evening.

Dr. Eric Caumes, head of the infectious and tropical disease department at Paris’s Pitie-Salpetriere Hospital, said Thursday on BFM television that the new restrictions are “an admission of failure” of the government’s prevention efforts. He urged tougher restrictions.

The head of France’s main business lobby MEDEF, Geoffroy Roux de Bézieux, said on Europe-1 radio Thursday that “shutting businesses that are not responsible for contamination is a mistake” that could drive many into bankruptcy. He claimed it was a gift to internet retailer Amazon, “the big winner from confinement.”

Rural regions of Russia, already poorly resourced, are taking the brunt of the latest wave of COVID-19 cases. Many hospitals are running out of room and supplies for new patients, and morgues are overflowing. 1:59

A database maintained by Johns Hopkins University put the cumulative number of COVID-19 cases reported around the world since the pandemic began at more than 44.5 million as of Thursday morning, with more than 30 million of those listed as recovered. The death toll reported by the U.S.-based university stood at more than 1.1 million.

Concern about a resurgent virus was mounting across Europe. In Belgium, the number of patients in hospitals is now higher than during the first wave of the coronavirus crisis. On Wednesday, Prime Minister Alexander De Croo promised tougher measures across the nation to avoid a breakdown of the country’s health system.

In the Americas, Argentina’s COVID-19 fatalities rose above 30,000, another grim milestone for a country now battling one of the world’s highest daily death tolls.

With less than a week before the hotly contested U.S. election, President Donald Trump held a pair of in-person campaign rallies in Arizona on Wednesday despite a surge in COVID-19 cases and criticism he is prioritizing his re-election above the health of his supporters.

In the Asia-Pacific region, Taiwan has hit 200 days without any domestically transmitted cases of COVID-19, highlighting the island’s continued success at keeping the virus under control even as cases surge in other parts of the world. Taiwan’s Center for Disease Control last reported a domestic case on April 12. CDC officials noted Thursday’s milestone and thanked the public, urging them to continue to wear masks and to wash their hands often.

Pakistani authorities have ordered all businesses, including restaurants, wedding halls and markets be closed after 10 p.m. to contain a coronavirus resurgence that began this month. The government Thursday reported some of its highest single-day totals, more than 900 new cases and 16 deaths. The numbers are almost double those reported some days last month.

A spokesperson for South African President Cyril Ramaphosa announced on Wednesday he’s in quarantine after contact with a dinner guest who has tested positive for the coronavirus. South Africa, the hardest- hit country in Africa, reported an average of 2.79 cases per 100,000 people for the week ending Tuesday.

In the Middle East, state television in Iran said on Wednesday that one person is dying from COVID-19 every three minutes, as the health ministry reported a record daily toll of 415 fatalities.

WATCH | COVID-19: What’s working in schools and what’s not? 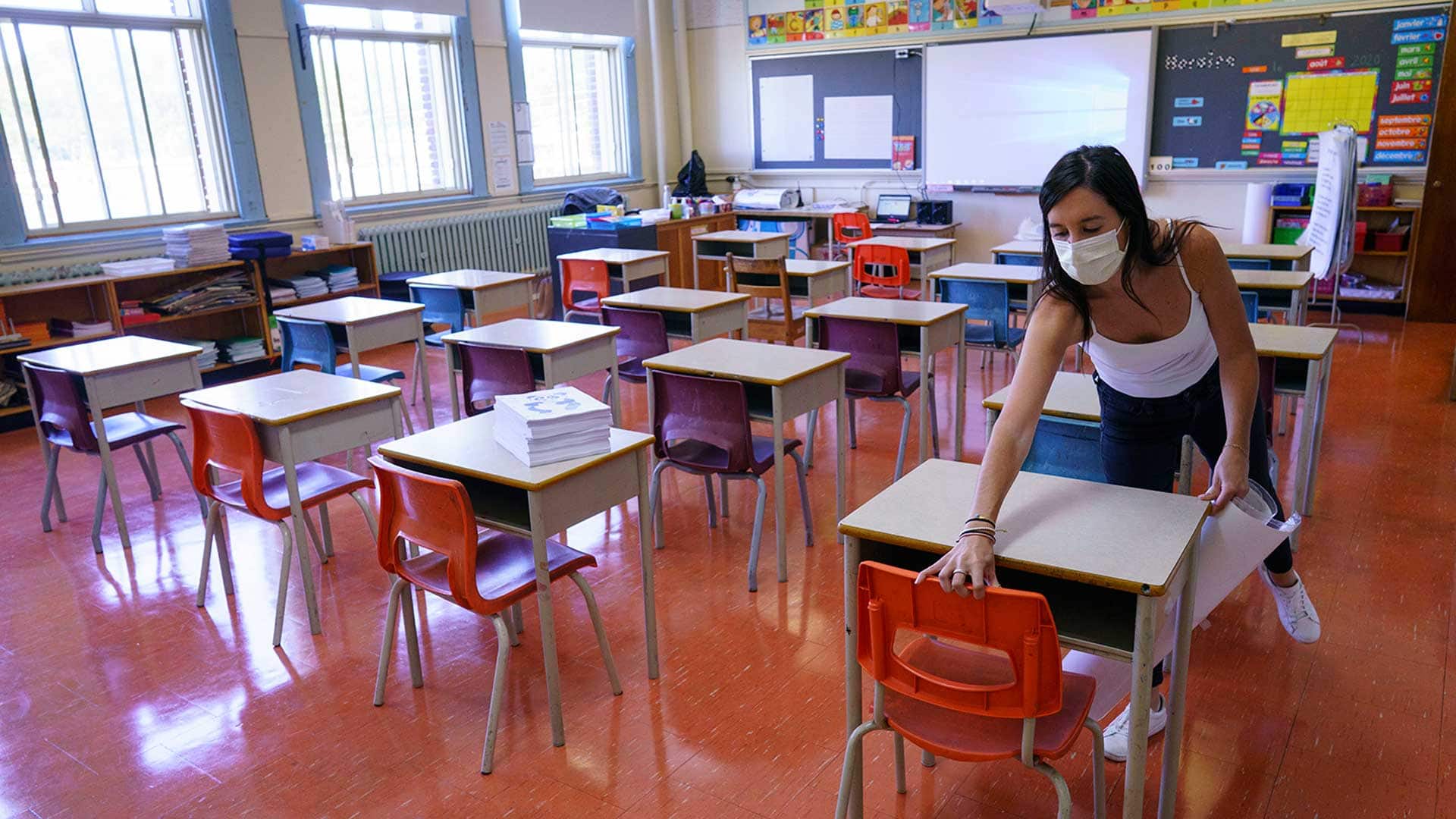 Two infectious disease specialists answer questions about COVID-19 and what’s been done to keep schools safe, whether the protocols are working or if the restrictions have gone too far. 5:56

As of 7 a.m. ET on Thursday, Canada had 225,586 confirmed or presumptive coronavirus cases, with 26,687 of those active. Provinces and territories listed 188,867 as recovered or resolved. A CBC News tally of deaths based on provincial reports, regional health information and CBC’s reporting stood at 10,032.

British Columbia reported 287 new COVID-19 cases and two additional deaths on Wednesday. Provincial health officials, who recently tightened up restrictions on in-home gatherings, said there were 87 people in hospital, with 25 in intensive care.

In Alberta, health officials said that 70 inmates and 70 staff members at the Calgary Correctional Centre have tested positive for COVID-19.

Drinking alcohol is being restricted at Saskatoon nightclubs after multiple COVID-19 outbreaks at some locations in the city. The Saskatchewan Health Authority is putting a cork in the consumption of alcohol between 10 p.m. and 9 a.m. as of Friday. Saskatchewan, which has 20 COVID-19 patients in hospital, including six in ICU, reported 67 new COVID-19 cases on Wednesday.

Manitoba‘s chief public health officer says the province is not seeing the results it expected from restrictions in the Winnipeg region, so tighter rules could be on the way. Dr. Brent Roussin said Wednesday some people are still gathering for social occasions and having a large number of contacts. The province reported 170 new cases and three new deaths.

Ontario reported 834 new cases of COVID-19 and five more deaths linked to the novel coronavirus. As of Wednesday, there were 312 in hospital, with 71 in ICU, the province said.  In York Region, which along with Toronto, Peel and Ottawa are under tighter restrictions, health officials said there were 44 confirmed cases of COVID-19 linked to wedding events held in Vaughan.

In Quebec, a group of gym owners threatened to defy lockdown orders and open their doors backed off that plan after the province said clients could also be fined. “If we have to be severe with people who go to the gym when it is not allowed, we will be ready to do so,” Quebec deputy premier Geneviève Guilbault said.

Despite Manitoba’s surge in COVID-19 cases, gyms remain open in most of the province even though the facilities are closed in Ontario and Quebec. Gym owners and patrons are increasingly frustrated and want to know why they’re paying more to contain the pandemic than other jurisdictions. 1:57

In Atlantic Canada, New Brunswick saw three new COVID-19 cases on Wednesday, with two in the Fredericton area and one in the Campbellton area. There were no new cases reported in Nova Scotia, Prince Edward Island and Newfoundland and Labrador.

Across the North, there were no new cases reported in Yukon and Nunavut. In the Northwest Territories, health officials said a presumptive positive COVID-19 case announced earlier this week was confirmed positive.