People who have received the full course of COVID-19 vaccines can skip the standard 14-day quarantine after exposure to someone with the infection as long as they remain asymptomatic and meet certain criteria, U.S. public health officials advised.

The U.S. Centers for Disease Control and Prevention (CDC) said on Wednesday the vaccines have been shown to prevent symptomatic COVID-19, thought to play a greater role in the transmission of the virus than asymptomatic disease.

“Individual and societal benefits of avoiding unnecessary quarantine may outweigh the potential but unknown risk of transmission (among vaccinated individuals),” the CDC said.

The agency has laid down strict criteria for people who would no longer have to quarantine after the vaccinations, including having received both doses of a two-dose vaccine.

People who choose not to quarantine should do so only if they received their last dose within three months, the CDC document said. It also said the guidance around quarantine applied to people who are “fully vaccinated,” referring to people who are more than two weeks out from their final dose.

Fully vaccinated persons who do not quarantine should still watch for symptoms for 14 days following an exposure.

Two-dose vaccines from Pfizer Inc. and Moderna Inc. have been authorized for emergency use in the United States. Johnson & Johnson applied for a U.S. authorization of its single-dose shot last week.

The CDC also noted people who have been vaccinated should, “Continue to follow current guidance to protect themselves and others,” including wearing a mask, maintaining physical distancing, avoiding crowds, avoiding poorly ventilated spaces, washing hands often and adhering to local public health guidelines. 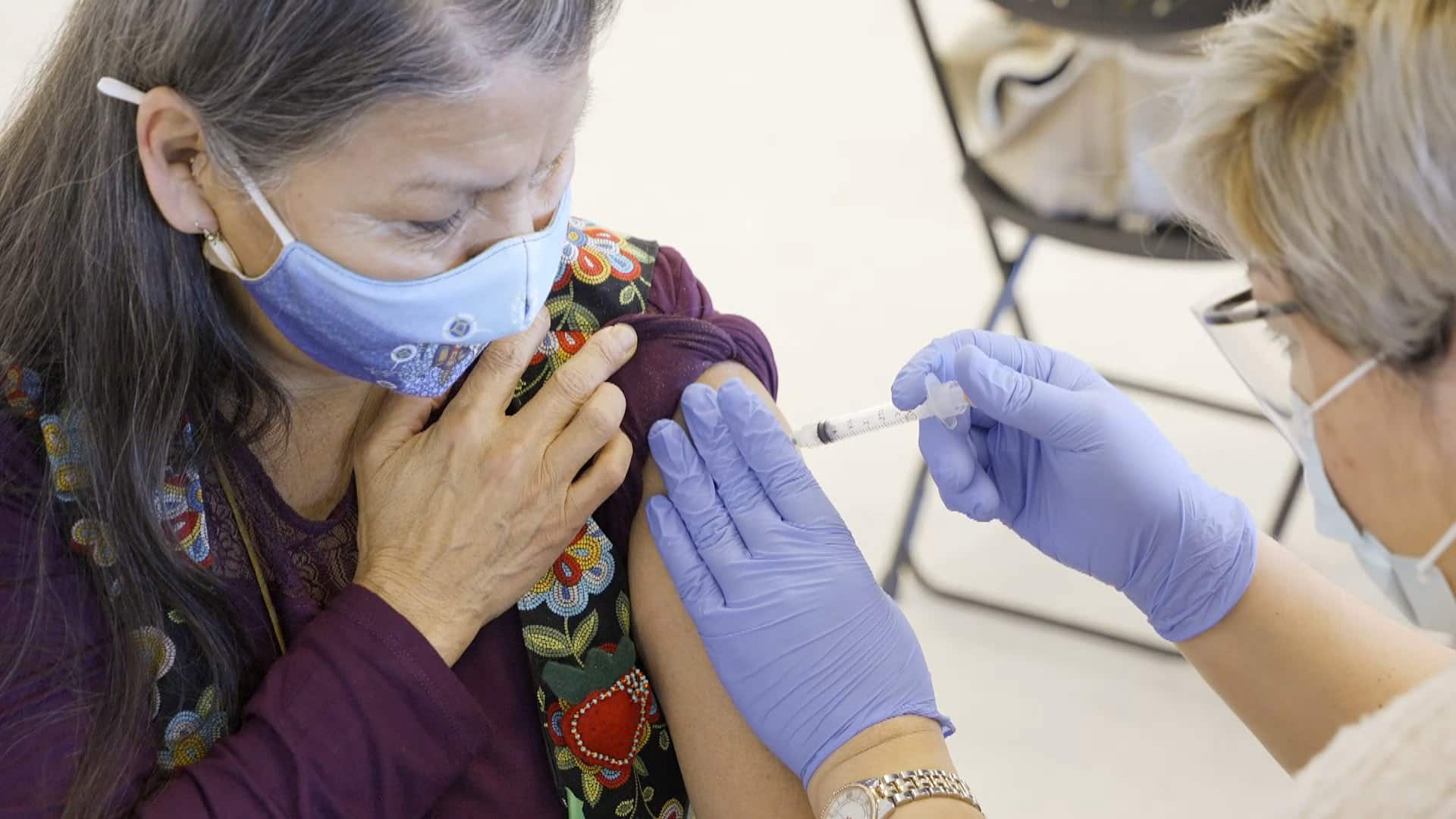 First Nations leaders in southern Manitoba are hoping to build trust in the COVID-19 vaccines through pop-up clinics in larger communities, while the Canadian Forces help remote communities manage outbreaks. 1:57

Newfoundland and Labrador reported 53 new cases of COVID-19 on Wednesday, the highest number of cases reported in the province on a single day since the beginning of the pandemic. Health officials also reported 32 presumptive positive cases that are still being investigated.

Almost all of the cases are in the eastern health region of the province, which includes the metro St. John’s area.

“I believe that going so long with low case counts of COVID led to complacency and we are now seeing the repercussions,” said Chief Medical Officer of Health Dr. Janice Fitzgerald. “This is something we had worried about and cautioned against.”

Fitzgerald announced several closures and restrictions, saying the focus now is on getting the spread of COVID-19 under control. The province, which as of Wednesday had 110 active cases, heads to the polls on Saturday in a provincial election. 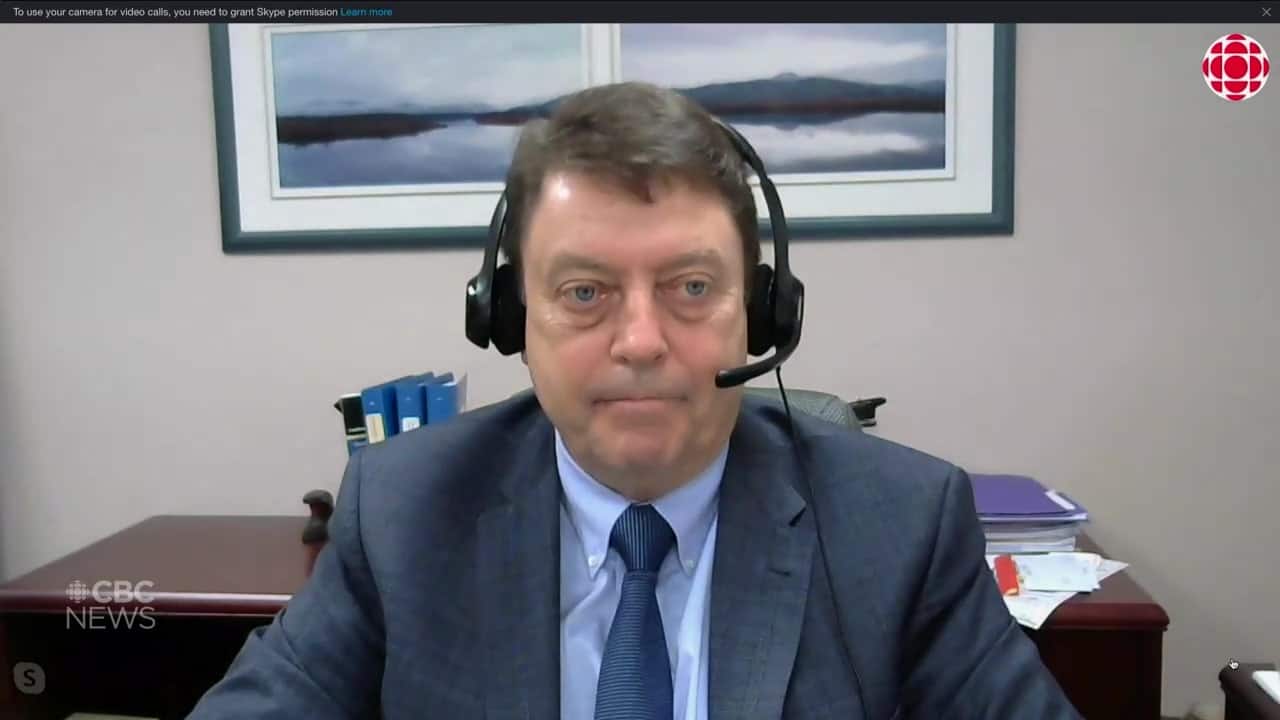 Newfoundland and Labrador’s chief electoral officer, Bruce Chaulk, says he is weighing whether a safe election can be run in all districts of the province after the spike in COVID-19 cases. Lack of staff to help run the poll will be a key factor in the decision. 13:38

New Brunswick reported 14 new cases of COVID-19 on Wednesday. Nova Scotia reported one new case, and there were no new cases reported in Prince Edward Island.

In Quebec, health officials reported 989 new cases of COVID-19 on Wednesday with 34 additional deaths. Hospitalizations stood at 918, with 148 COVID-19 patients in the province’s intensive care units.

Ontario reported 945 new cases of COVID-19 on Thursday, though health officials noted that case counts from Toronto had been underreported due to an ongoing data migration. The province reported 18 additional deaths, bringing the provincial death toll to 6,614.

Hospitalizations in Ontario stood at 883, with 299 people listed as being in the province’s intensive care units.

Ontario Education Minister Stephen Lecce is expected to make an announcement Thursday afternoon as students, teachers and parents wait for word on how the province will handle the upcoming March Break.

Across the North, there was one new case of COVID-19 reported in Nunavut on Wednesday. There were no new cases reported in Yukon or the Northwest Territories.

LISTEN | With schools reopening, how do you keep kids safe?

Front Burner20:50With schools reopening, how do you keep kids safe?

As COVID-19 cases go down, pandemic restrictions are loosening across the country, including in Ontario, but concerns about variants remain. Today on Front Burner, what that means for the safety of kids at school. 20:50

As of early Thursday morning, more than 107.3 million cases of COVID-19 had been reported worldwide, with more than 60 million of those cases listed as recovered or resolved in a tracking tool maintained by Johns Hopkins University. The global death toll stood at more than 2.3 million.

In the Americas, Argentina surpassed two million COVID-19 infections on Wednesday, health officials said, as the country scrambles to ramp up a vaccination program ahead of the fast-approaching southern hemisphere autumn.

In the U.S., federal authorities are investigating a massive counterfeit N95 mask operation in which fake 3M masks were sold in at least five states to hospitals, medical facilities and government agencies. The foreign-made knock-offs are becoming increasingly difficult to spot and could put health-care workers at grave risk for the coronavirus.

These masks are giving first responders “a false sense of security,” said Steve Francis, assistant director for global trade investigations with the Homeland Security Department’s principal investigative arm. Officials could not name the states or the company involved because of the active investigation.

Nearly a year into the pandemic, fraud remains a major problem as scammers seek to exploit hospitals and desperate and weary Americans. Federal investigators say they have seen an increase in phony websites purporting to sell vaccines as well as fake medicine produced overseas, and scams involving personal protective equipment. The schemes deliver phony products, unlike fraud earlier in the pandemic that focused more on fleecing customers.

The Africa Centers for Disease Control and Prevention director said African countries that have not found cases of the coronavirus variant dominant in South Africa should go ahead and use the AstraZeneca vaccine.

John Nkengasong spoke to reporters a day after South Africa announced major changes to its vaccination rollout plan, citing a small study that suggested it was poor at preventing mild to moderate disease caused by the variant.

Nkengasong said just seven countries on the 54-nation African continent have reported the variant and none besides South Africa is being “overwhelmed” by the variant. None has expressed concerns about the AstraZeneca vaccine except for South Africa. Africa has had more than 96,000 confirmed deaths.

Pfizer, meanwhile, said it could deliver its vaccine, which requires ultra-cold temperatures for storage and distribution, directly to points of vaccination in South Africa.

In the Asia-Pacific region, the Philippines is set to receive 600,000 doses this month of Sinovac Biotech’s vaccine donated by China, a portion of which will be used to inoculate military personnel, a senior government official said.

South Korea has reported 504 new coronavirus cases for the latest 24-hour period. It is the highest daily jump in about two weeks and raising worries about a potential surge as the country begins the Lunar New Year’s holidays.

Health officials said Thursday the newly reported cases took the country’s total for the pandemic to 82,434, with 1,496 deaths related to COVID-19. In recent weeks, South Korea’s caseload has displayed a gradual downward trajectory largely thanks to stringent distancing rules such as a ban on social gatherings of five or more people.

Officials have urged the public to maintain vigilance and stay at home during the four-day Lunar New Year’s holidays that began Thursday. Millions of people were expected to travel across the country to visit hometowns and return home during the holidays.

In the Middle East, Israel began reopening its education system on Thursday after a more than six-week closure due to the country’s worrying surge in coronavirus infections. Kindergartens and Grades 1 to 4 opened in cities with low infection rates, with around one-fifth of the country’s pupils returning to classrooms. Middle schools and high schools remained closed.

“We didn’t shut down public life early enough or systematically enough amid signs of a second wave and warnings from various scientists,” she told lawmakers Thursday. Merkel and the governors of Germany’s 16 states agreed late Wednesday to extend the current lockdown, which was due to expire Sunday, until at least March 7. Schools and hairdressers will be able to open earlier, albeit with strict hygiene measures.

Merkel defended a decision to set a target of pushing the number of new weekly cases per 100,000 inhabitants below 35 before the lockdown is eased further.

“The virus doesn’t follow dates, the virus follows infection numbers,” she said. A vaccination program offered hope for the coming months, said Merkel, before noting that she understands people’s disappointment with the rollout, which is far slower than in Britain, Israel and the United States.

To avoid a third wave of infections, however, a little more patience is required. “I don’t think that the back and forth — opening up then closing down again — brings more predictability for people than waiting a few days longer,” said Merkel. Germany’s disease control agency said there were just over 64 cases per 100,000 inhabitants nationwide in the past week. The Robert Koch Institute said there were 10,237 new cases and 666 deaths in the past day, taking the total cases to 2.31 million, including 63,635 deaths.

The Czech Republic announced a stricter lockdown in three districts from east to west where infections have soared and hospitals are struggling to cope.