With hospital intensive care units in parts of Ontario reaching capacity due to COVID-19, a new hospital will open in Vaughan, Ont., next month to help relieve pressure on other facilities in the Greater Toronto Area, the province announced Monday.

The Cortellucci Vaughan Hospital, due to open Feb. 7, will be a “dedicated resource to support the province’s COVID-19 response,” taking in critical patients from other hospitals, Premier Doug Ford said.

Toronto’s supersite is being described as a “proof-of-concept” clinic that will help the city fine-tune the operation of its future clinics, “ensuring safety and increasing efficiency in advance of wider immunization,” according to a city news release.

Retired general Rick Hillier, who heads the province’s vaccine distribution plan, told CBC News on Sunday that Ontario wants to have everyone vaccinated by late July or early August.

The Toronto site is not open to members of the public and will instead operate with a sample group of health-care workers, including those involved in harm reduction and Streets to Homes staff who support the city’s vulnerable populations.

The clinic aims to vaccinate 250 people per day. However, due to the delay in obtaining the Pfizer-BioNTech vaccine from Europe, the clinic inside the Metro Toronto Convention Centre is set to close until further notice after the work day on Friday, said Matthew Pegg, head of the city’s immunization task force.

He said anyone who got a first dose of the vaccine at the clinic will be able to receive a second dose within the recommended time frame.

Ontario reported 2,578 new cases of COVID-19 on Monday, which is the fewest logged on a single day in about two and a half weeks. However, the province’s labs processed just 40,301 test samples for the novel coronavirus, nearly 20,000 fewer than the day before.

The province also reported 24 new deaths and a total of 1,571 patients with COVID-19 in hospital. Of those, 394 were being treated in intensive care units and 303 were on ventilators — the first time the latter has climbed above 300 since the pandemic began.

Meanwhile, vaccinations got underway at the mass vaccination site in Brandon on Monday morning, following an initial hiccup in which hundreds of health-care workers with immunization appointments were given the wrong address.

Joanna Robb, a cytotechnologist who works at Shared Health’s Westman Lab, which deals with COVID-19 specimens, was the first to receive a dose of the vaccine.

“You hear the death tolls every day and the numbers, and it’s heartbreaking,” Robb said. “And we can do something.”

The Brandon site was slated to give out more than 550 shots on Monday alone, provincial officials said. The centre will be open 12 hour a day, seven days a week, for eligible health-care workers.

Manitoba registered 118 new COVID-19 cases and four more deaths on Monday. Forty-six of the new cases are in the province’s North Health Region. 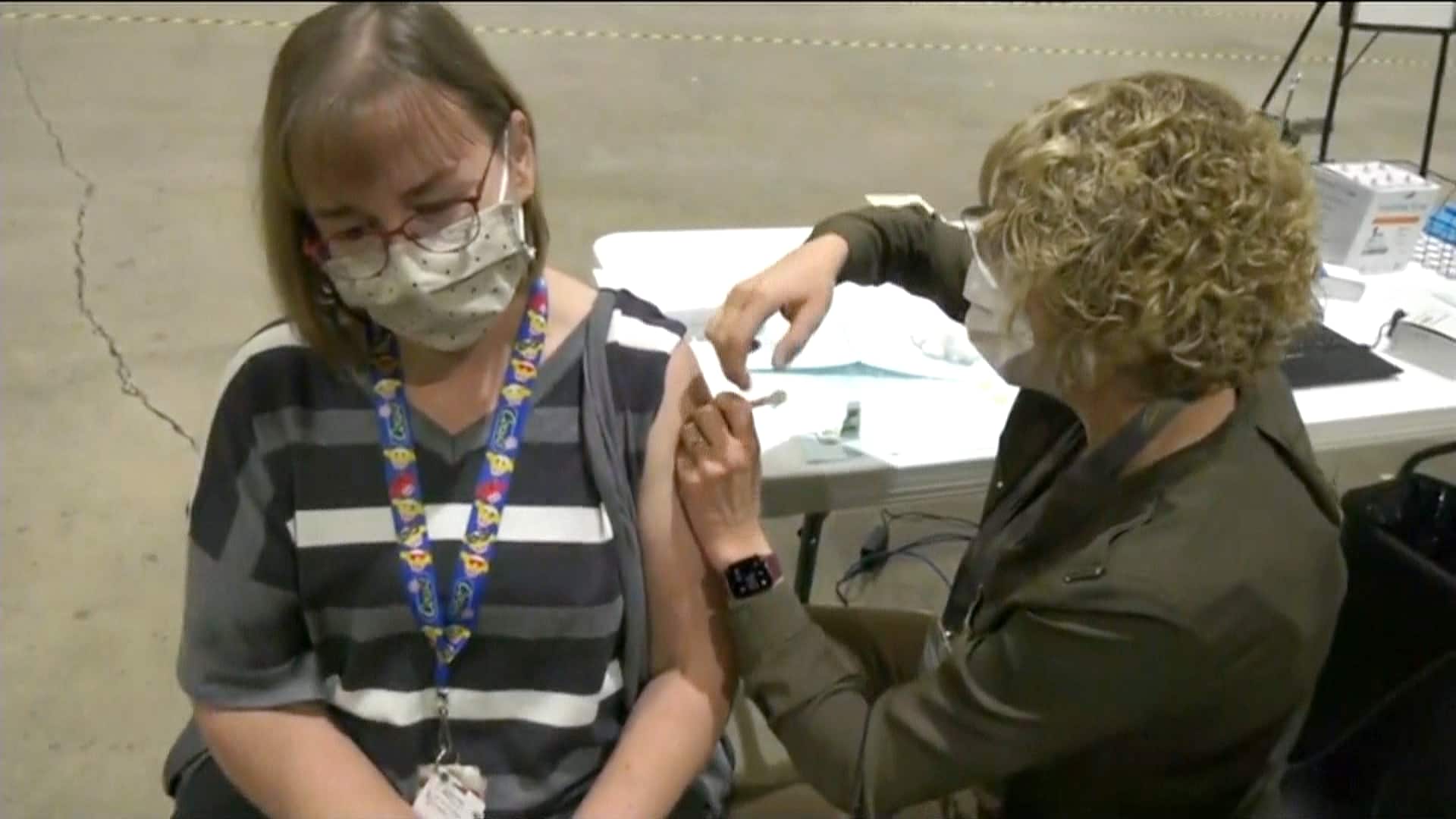 The Keystone Centre in Brandon, Man., is now a supersite for COVID-19 vaccinations. It opened on time Monday despite incorrect information about its location originally being given out. 1:51

Anand said on Twitter she has been in touch with the drugmaker and was assured that it is “deploying all efforts” to return to its regular delivery schedule “as soon as possible.” The minister said shipments for this coming week will be largely unaffected.

New Brunswick has rolled back the Edmundston and Grand Falls region to a more restrictive red phase, and other regions face the same prospect as the province continues to see a surge in COVID-19 cases.

The province reported 26 new cases on Monday. That follows a tally of 36 new cases of COVID-19 on Sunday — 24 of them in the Edmundston and Grand Falls region, about 380 kilometres northwest of Saint John — marking its highest single-day total since the start of the pandemic.

The move to red-phase restrictions, which took effect in the region at midnight, mean som businesses — including movie theatres, barbershops and hair salons — must close, while restaurants can only operate with takeout and delivery. However, schools will remain open with additional health measures in place.

The rest of Atlantic Canada has not seen the recent spread of COVID-19 infections to the extent that New Brunswick has.

Nova Scotia reported no new cases on Monday, after reporting four additional cases on Sunday, all of which are related to travel outside Atlantic Canada.

Newfoundland and Labrador added one new case on Sunday, in a person who returned home from work in Alberta.

P.E.I. reported four new cases on Monday, three of them linked to travel outside of Atlantic Canada and one involving someone who was in contact with a previously reported case, the province said in a news release.

In Quebec, high schoolers headed back to classrooms on Monday after a month at home, joining elementary students who returned to in-person instruction a week before the older kids. Among other health precautions, students must wear medical-grade masks and will be tested immediately if they show any COVID-19 symptoms.

The province reported 1,634 new cases on Monday, though it noted that a delay in the transmission of laboratory data caused a delay in the reporting of cases to public health departments on Sunday, as well as a drop in the number of new cases reported.

Alberta will have no more COVID-19 doses available to administer by the end of Monday or early Tuesday due to the Pfizer supply disruption, Premier Jason Kenney has announced.

The premier told a news conference on Monday that the province is putting a temporary hold on the first dose of COVID-19 vaccinations to ensure it has enough vaccine to provide a second dose to people who have already received their first shot.

Alberta reported 474 new COVID-19 cases and 11 new deaths on Monday. Dr. Deena Hinshaw, Alberta’s chief medical officer of health, said 739 people are in hospital with the respiratory illness, 120 of whom are in intensive care.

British Columbia on Monday reported 1,330 new cases of COVID-19 and 31 more deaths over the last three days. As of Monday, 87,346 people in B.C. had received at least one dose of vaccine.

Air quality research and a growing understanding of how COVID-19 spreads are helping to explain why facing off in hockey arenas can be risky during the pandemic. 8:27

In the North, Northwest Territories health officials placed the hamlet of Fort Liard under a two-week containment order after three cases were discovered in the community.

A dozen employees of Agnico Eagle’s Meliadine gold mine in Nunavut are now in self-isolation after a worker at the mine tested positive for COVID-19, the company said in a news release on Friday. There have been nine confirmed cases of COVID-19 at the mine since the start of the pandemic, an Agnico Eagle spokesperson told CBC News on Saturday via email.

As of Monday, more than 95.4 million cases of COVID-19 had been reported worldwide, with more than 52.5 million of those considered recovered or resolved, according to Johns Hopkins University’s COVID-19 case tracking tool. The global death toll stood at more than two million.

The head of the World Health Organization says it’s “not right” that younger, healthier adults in rich countries get vaccinated against COVID-19 before older people in poorer countries.

Director general Tedros Adhanom Ghebreyesus kicked off WHO’s week-long executive board meeting — virtually from its headquarters in Geneva — on Monday by lamenting that only 25 vaccine doses have been provided in a single poor country, while more than 39 million doses have been administered in nearly 50 richer nations.

Tedros again criticized “bilateral deals” between drug companies and countries that hurt the ability of the WHO-backed COVAX program, which aims to get vaccines to all countries based on need.

“Most manufacturers have prioritized regulatory approval in rich countries, where the profits are highest, rather than submitting” data to WHO, he said, so it can approve vaccines for wider use.

In Europe, France on Monday began a campaign to inoculate people over 75 against the coronavirus, as its death toll rose past 70,000 over the weekend.

The new variant of COVID-19 first detected in Britain is now starting to gain a foothold in Belgium, officials say, with cases reported in several northern schools on top of an outbreak in a nursing home.

Officials in the Swiss mountain resort of St. Moritz quarantined employees and guests of two luxury hotels, closed ski schools and kept schoolchildren home from class on Monday after a dozen positive tests for a highly infectious coronavirus variant.

In Asia, a Chinese province grappling with a spike in coronavirus cases is reinstating tight restrictions on weddings, funerals and other family gatherings, threatening violators with criminal charges.

The notice from the high court in Hebei province did not give specifics but said all types of social gatherings were now being regulated to prevent further spread of the virus.

In the Americas, California became the first U.S. state on Monday to record more than 3 million known COVID-19 infections, according to data from Johns Hopkins University. California only reached 2 million reported cases on Dec. 24 and has the highest count of any state. Nearly 34,000 deaths in the state have been attributed to the novel coronavirus.

Incoming White House chief of staff Ron Klain says the coronavirus pandemic will get worse in the U.S. before it gets better, projecting another 100,000 deaths from COVID-19 in the first five weeks of president-elect Joe Biden’s administration.

Speaking on CNN’s State of the Union, Klain said Biden was inheriting a dire situation, saying even with vaccines, “it’s going to take a while to turn this around.” Biden has set a goal of injecting 100 million doses of coronavirus vaccine in his first 100 days in office, a goal Klain said they were on pace to meet.

Brazil’s health regulator on Sunday approved the urgent use of coronavirus vaccines made by Sinovac and AstraZeneca, enabling Latin America’s largest nation to begin an immunization program that’s been subject to months of delay and political disputes.

Brazil currently has six million doses of Sinovac’s CoronaVac vaccine ready to distribute in the next few days and is awaiting the arrival of another two million doses of the vaccine made by AstraZeneca and partner Oxford University.

In Africa, South Africa, which has yet to receive its first coronavirus vaccine, has been promised nine million doses by Johnson & Johnson, the Business Day newspaper reported.

South Africa has delayed reopening schools as it faces a rapid resurgence of COVID-19 overwhelming the country’s hospitals and driven by a more infectious variant of the virus.

Ghana’s president said Sunday that infection rates are skyrocketing and include variants of the virus not before seen in the country, filling treatment centres and threatening to overwhelm the health system.