Wiebe, who secured a spot for the Tokyo Olympics at the Pan Am qualifier in March, will compete for a bronze medal in the 76-kilogram division against the winner of Wednesday’s repechage between Vasilisa Marzaliuk of Belarus and Pauline Denise Lecarpentier of France.

The 31-year-old Wiebe, who lives and trains in Calgary, was defeated by fall after taking a 1-0 lead on a passivity call at the event replacing this year’s world championships due to coronavirus concerns.

“This competition will be a huge step in my Olympic preparations by providing an opportunity to gain experience competing in these new, uncertain circumstances,” she said recently.

In the quarter-finals earlier Tuesday, Wiebe won 10-0 by technical superiority over Zsanett Nemeth of Hungary.

In September 2019, Wiebe lost to Epp Maee of Estonia in the dying seconds of her quarter-final match at the world championships in Nur-Sultan, Kazakhstan

But she rebounded nine months ago in Ottawa, where Wiebe soundly beat Genesis Rosangela Reasco Valdez of Ecuador 6-0 in the 76 kg semifinal at the Shaw Centre to book her ticket for the Olympics that was rescheduled to next summer because of the COVID-19 pandemic. 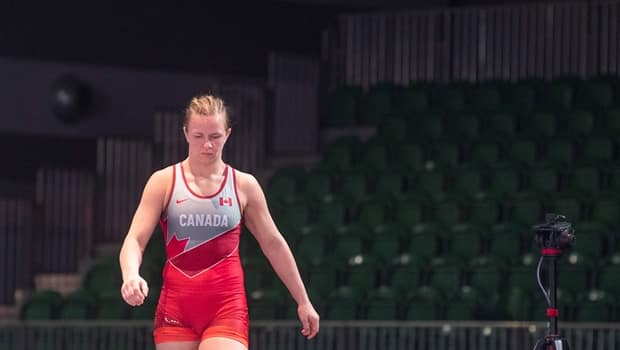 The Stittsville, Ont., secures the right to defend her Olympic title with a semifinal win in the 76-kilogram weight class at the 2020 Pan-American Olympic Wrestling Qualification Tournament.  2:29

In August 2017, Adar was the first Turkish woman to appear in a final at worlds and the first to win wrestling gold.