On a bright November morning in Australia, Andrea Seccafien takes a call from a Toronto reporter before a pair of late spring runs with temperatures set to reach 33C.

“Never a rest day,” said Canada’s record holder in the women’s half marathon. “To run more 5K to half marathon I need to run a lot.”

Seccafien doesn’t mind the scorching heat now that she’s finally training for a race — a half marathon Dec. 13 in the Australian island state of Tasmania — after two coronavirus pandemic lockdowns kept her out of competition from March through October.

Seccafien’s mental health suffered greatly through those months. Sharing a small apartment with fiancé Jamie Whitfield, she became overwhelmed by “a spiral of thoughts, a lot of worries” and took a break from training in June before the second lockdown of 111 days.

Seccafien often wondered if the rescheduled Tokyo Olympics would indeed be held next summer. Would she get a chance to qualify for the Summer Games in the 10,000 metres? What would a long layoff mean for her career?

Everything felt so much harder because my heart rate was always 20 beats over a normal amount.— Canadian runner Andrea Seccafien on training while struggling with mental health

“I didn’t know what was wrong [with me]. I was definitely dealing with a lot of anxiety but thankfully we have a really good support group with Athletics Canada,” said Seccafien, who also began seeing a sports psychologist in Australia, where she has lived since late 2017 after Jamie landed a job as a post-doctoral researcher at the Melbourne campus of the Australian Catholic University.

“I also wasn’t sleeping well, so it was just a lot of things going on.”

During lockdown, Melbourne’s five million residents could leave home to exercise outside and buy groceries but not travel further than five kilometres. Fortunately, there was 31 km stretch of running space for Seccafien on a nearby trail system. Still, the native of Guelph, Ont., faced many challenges.

“Everything felt so much harder because my heart rate was always 20 beats over a normal amount,” the 30-year-old recalled, her voice cracking with emotion. “My body was amped up all the time.

“I would try to do a workout but running a time that would normally be very easy would feel as if I was doing a threshold or a pace faster and harder than a regular easy run.”

During tougher training sessions on the road, Jamie would bike alongside Seccafien and joined her on all long runs.

“That was extremely helpful. It was really hard [emotionally] but we’re a good team,” said the Melbourne Track Club member, who found it “nerve-racking” running 150 km weekly and not being able to receive physio and massage therapy.

Looking back, Seccafien realizes stepping away was necessary after struggling through training and not seeing improvement in her fitness.

“When we went back into lockdown in July, it gave me time to train on my own, at my own pace and not compare myself to others, which was beneficial to getting back into fitness and confident again,” said Seccafien, who also focused on meditation and her daily training responsibilities to work through the anxiety. “I think if I had to go back training [with my group] it would have spiraled again. Now, I feel normal.”

Seccafien is also in good physical health after tearing her right plantar — the ligament connecting the heel bone to your toes — in September 2018. After attempts to run through the pain led to a stress reaction (deep bone bruise) and prevented her from racing the 10,000, Seccafien reinjured the plantar while finishing second in the 5,000 at the Canadian championships in Montreal on July 25, 2019.

She recovered to run two personal-best times in three days that October in Doha, Qatar — 15:04.67 in the semifinals to shave nearly four seconds off her PB and hit the 15:10 Olympic standard, then clocking her first-ever sub-15-minute 5,000 to place 13th in her first world final. 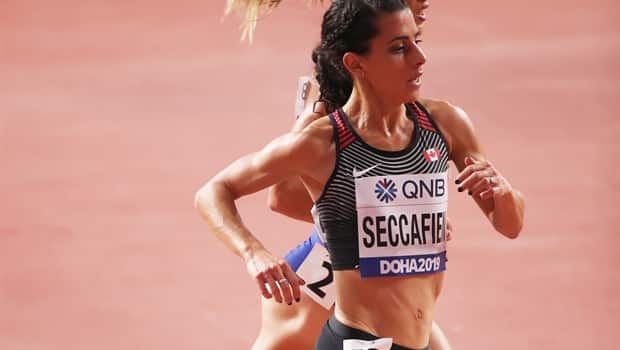 “You always want to finish higher, so the goal in Tokyo would be top eight or 10,” said Seccafien, who was 20th at her 2016 Olympic debut in Rio. “In Rio I was so green. I was making moves and wasting energy. Now, I feel I’ve learned how to run those [championship] races.”

In Tasmania, the former University of Toronto Track Club runner will race for the first time since setting a 33:05 PB in the 10K on Feb. 23, three weeks after taking down Natasha Wodak’s Canadian half marathon record in 1:09:38 at the Kagawa Marugame International Half Marathon in Japan.

“Since August, I have had a consistent block of training and I do think I’m quite fit, so there is no reason it shouldn’t go well,” said Seccafien, who remains hopeful of running the 5,000 and 10,000 in Tokyo. “I don’t know if it’ll be a Canadian record race, but I hope to be around that time.”