The first doses of the COVID-19 vaccine in Newfoundland and Labrador have been administered, going to to two front-line health-care workers, marking the start of what’s expected to be at least a year-long vaccination rollout plan.

“I never felt a thing,” Foley-Vick she said with a laugh after receiving the vaccine shot. “It was great.”

Foley-Vick didn’t tell many of her friends and family that she was going to be the first to get the vaccine, instead letting them get a nice surprise Wednesday. But she said the vaccine isn’t just for her own safety.

“It’s a wonderful feeling to be acknowledged and have this opportunity. I feel like it’s an early Christmas gift, in a way,” she said.

“But I’m doing this to represent — it’s not just for me, it’s for all the other people that have worked in this COVID pandemic and just thankful for the opportunity, and encourage everyone of course to get the vaccine.”

The first vaccines were given out just a couple of hours before the province announced five new cases of COVID-19. 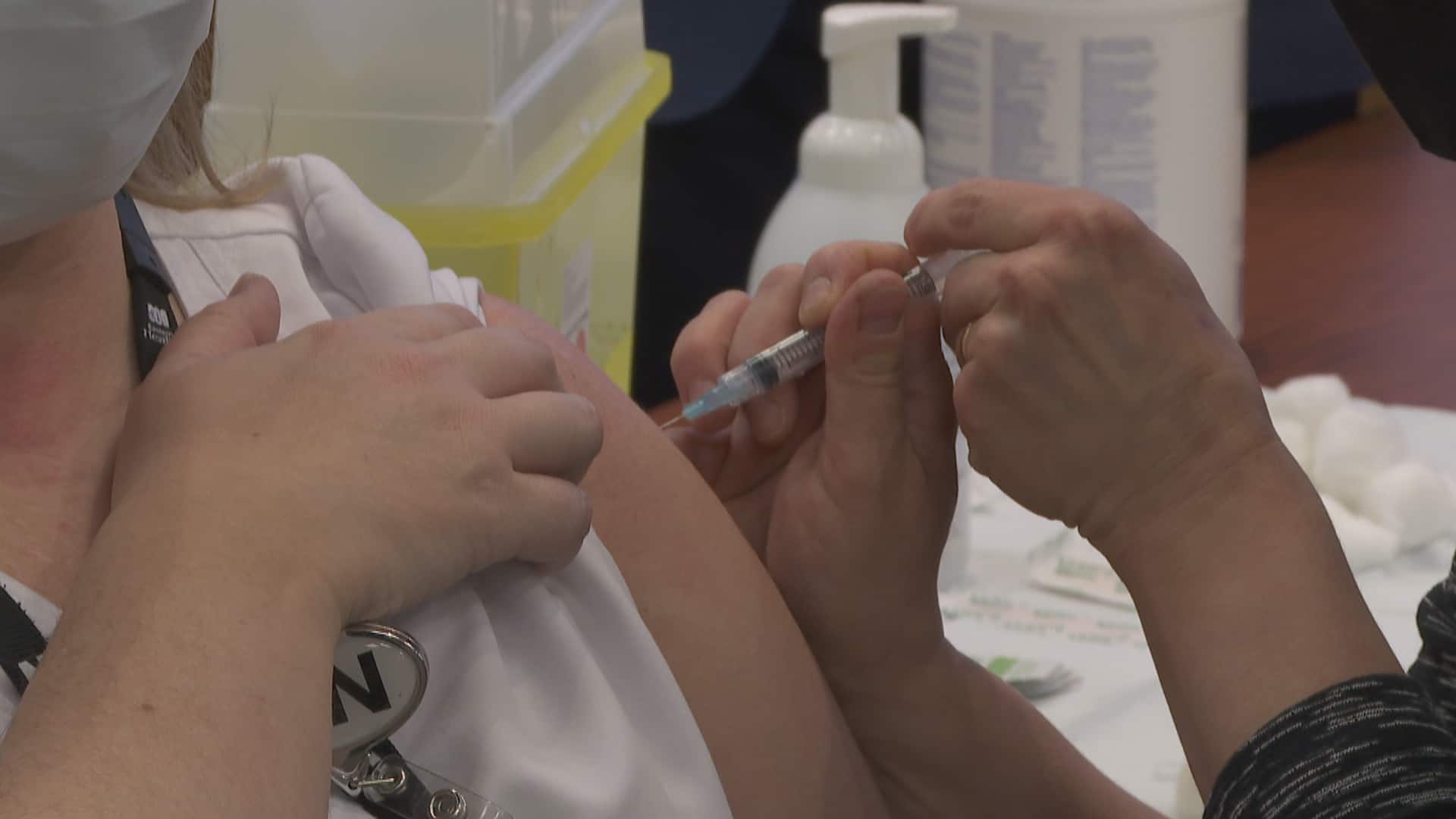 Before the shots were given, Premier Andrew Furey said Dr. Morkar was one of the first to put up his hands to volunteer to treat COVID-19 patients when the pandemic hit.

“It’s painless,” Morkar could be heard saying as Fitzgerald gives him the province’s second vaccination shot.

In the early days of the pandemic, Morkar had to self-isolate in order to treat COVID-19 patients, meaning he saw his family only through Skype and Zoom calls.

“Just a sense of relief. A sense of, the end is close,” Morkar said.

“A lot has changed in the world. I mean, all of us have personally sacrificed so much. I’ve seen friends, I’ve seen family members lose jobs and just the relief that we’re going back to normal, the sense that this is going to end.”

Working on Eastern Health’s COVID-19 response unit right from the start has left its mark on Morkar, who said he hopes people will continue to take the pandemic seriously and follow health guidelines while the vaccination process gets underway.

“We don’t want to see the COVID unit active, we don’t want to see patients in there. It was stressful for patients, for staff, and for the families. One of the worst things that I experienced working on that ward and having sick patients without having families be able to come visit them,” Morkar said.

“I recall a case where there was actually two family members in hospital and it was … the grief of that was just something that I’ll never recover from.”

‘This is a historic day’

The first doses of the Pfizer-BioNTech vaccine arrived in St. John’s on Tuesday, with more set to arrive likely next week.

Public health officials earlier on Wednesday released their vaccination plan outlining who will get priority. The first doses will be given to front-line health-care workers who would respond to an outbreak of the virus.

“These are the men and women who are on the front lines, putting themselves at harm’s risk to protect the public, and so then they will be getting the first run of inoculations,” Furey said Wednesday morning.

Furey said media will be allowed to be there when the first vaccination happens.

“This is a historic day and, as we suggested when this was discussed in the past, it was a balance of ensuring that the first participant consents, of course, to having a media availability and arranging the logistics with Eastern Health,” Furey said Monday morning.

Eastern Health is responsible for running the vaccination clinic, and the vaccine response team put together by public health officials has established a list of the workers who will be receiving the first doses, Furey said.

“Certainly I think the priority is for the women and men who would be working in the actual units, so ventilated units, ICU units, emergency rooms, people who would be exposed on the front lines,” Furey said.

“I’m assuming there would be support staff involved as well, but that level of granular detail I’m not familiar with at this particular moment in time.”

Fitzgerald outlined what she called the province’s “fluid plan” for the COVID-19 vaccine during a briefing Wednesday morning. She emphasized that the plan is likely to change as the weeks go by, with changing information and availability of vaccines.

Fitzgerald said the province is expecting two vaccines to be available during the first quarter — January to March — of 2021. The Pfizer-BioNTech vaccine is the only one currently approved and being administered in Canada, but it’s expected a vaccine from Moderna will be approved by regulators in the coming weeks.

Health officials say they expect to inoculate 28,000 people in N.L. using the Pfizer-BioNTech vaccine by the end of March. There are a number of logistical challenges with this vaccine, which requires storage in an ultra-low-temperature freezer and cannot be redistributed, meaning it must be stored and administered, for now, at the Health Sciences Centre in St. John’s.

Pending approval, the Moderna vaccine is expected to arrive in January. It has much fewer restrictions and is more stable than the Pfizer-BioNTech vaccine, and it’s expected 9,000 people will receive that shot in the first three months of 2021.

Fitzgerald said that while the Moderna vaccine would, once approved, be easier to transport, the vaccine supply is part of a nationally negotiated deal.

“There’s not a lot of choice in what we will be getting at this point,” Fitzgerald said.

“At this point the preferred vaccine is an approved and effective and safe vaccine, whatever that vaccine may be, and we will deal with the challenges that come with that vaccine.”

The initial vaccine supply will go to priority groups, including seniors living in long-term-care facilities, health-care workers at high risk of exposure, residents of advanced age — Fitzgerald said guidance prioritizes those over the age of 80 — and remote or isolated Indigenous communities.

The vaccine plan will be implemented in three phases: the first will be to prioritize health-care workers to maximize the use of the initial delivery of the Pfizer-BioNTech supply. Since it is not transportable yet, regional health authorities will co-ordinate movement of staff to a common vaccination. Administration sites are planned for St. John’s, Gander, Corner Brook, Labrador City/Wabush and Happy Valley-Goose Bay.

Fitzgerald said she expects inoculation to happen quickly, pointing to the speed of flu clinics as an example of how vaccinations will run. The province received 1,950 doses of the Pfizer-BioNTech product. With two doses required per person, that means 975 people will get the vaccine for now. A second set of inoculations is expected to arrive in the province within the next week.

“I don’t think it will take very long for 975 doses to be delivered. A few days, perhaps,” she said.

The second phase will have much the same activities as the first phase, while also accounting for the arrival of the Moderna vaccine — or a changed mobility of the Pfizer vaccine.

“Rather than moving the people to the vaccine, we will be able to move the vaccine to the people,” Fitzgerald said.

Transitioning to Phase 3 will depend on conditions, but would see the delivery of vaccines to the general public. It is anticipated that by this point, the vaccines will be in a more stable state and will be able to be administered without the logistical challenges being faced today.

“It certainly doesn’t seem like we’d be moving there before June, which would be the end of Quarter 2, and perhaps through the summer. But again that’s an estimate based on what we know now — that could change,” Fitzgerald said.

Fitzgerald said there will be “very straightforward and obvious communication going out” to let people know when they will be able to get the COVID-19 vaccine, and the four regional health authorities will be part of that communication plan.

The vaccination plan will be revised and updated as health officials move through priority groups, the number and types of vaccines available increases, and restrictions on distribution, storage and transportation are modified by manufacturers.

‘This is a great day’

Furey said the AstraZeneca vaccine is the third up for approval, and that one has been proven to be even more stable and able to be shipped much more easily.

“All these variables are being modelled into what the mass distribution of this vaccine and this vaccination program look like heading into 2021,” Furey said.

It’s the beginning of the end.– Dr. Janice Fitzgerald

Even with the vaccine rollout beginning, Furey asked people to remain cautious.

“This is a great day for Newfoundland and Labrador. Everyone should take note of where they are today in this historic moment,” he said.

“But don’t let your guard down, because this is only one tool that we have moving forward, and it will take time before we can start to relax some of the precautions that we’ve all implemented during this pandemic.”

That’s a sentiment echoed by Fitzgerald, who said she and her fellow health officials are “pleasantly surprised” by the speed at which a vaccine has been developed for a virus that emerged in the world a year ago.

She credits unprecedented international co-operation among scientists and health officials.

“I’m feeling very hopeful today. I think everybody on the team has a spring in their step today because of this, and that we’re able to give these first vaccines,” she said.

“I think all of us are very proud and very happy to be a part of it, so yeah, there’s just a sense of hope and a light at the end of the tunnel. We know that there’s still lots of work to do, but it makes it easier to know that it’s the beginning of the end.”

As of Wednesday afternoon, Newfoundland and Labrador had 23 active cases of COVID-19. The total number of cases in the province since March is 364.